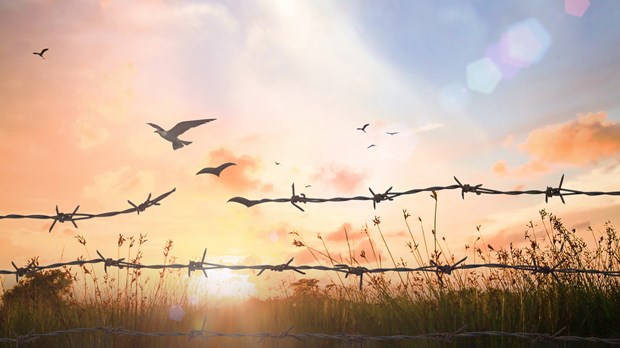 I started a new freelance writing job recently and my husband asked me, "When is your deadline?

I answered, "The deadline is as fast as I can get it back to them before they decide they don't like me anymore."

One might think I lack confidence. If confidence implies that I have a sense of how a thing is going to turn out, then true: I don't have confidence.

People are unpredictable. Life is unpredictable. And God's plans are sometimes confusing. With that in mind, I have fallen in love with a different word: courage. Applied to a marriage, courage can make all the difference.

But it doesn't happen much.

We usually come to our marriages with baggage from previous family relationships, previous experiences, pre-conceived notions of what to expect from a spouse—nevermind the ways we've neglected to grow ourselves and neglected to get to know God as well as we could. And there it is: a pile of not-so-pretty.

And very few of us want to tackle what isn't pretty in our marriages. Most of us don't even know how.

One of my favorite literary quotes is from Atticus Finch in To Kill a Mockingbird, telling his son, courage is "when you know you're licked before you begin but you begin anyway and you see it through no matter what. You rarely win, but sometimes you do."

It may seem disheartening to start a quote on courage with "you know you're licked," but Atticus' point was, you're not. Not like you think. Courage is not a prop that gets you an outcome. It's an attitude that sustains you on a journey.

When our marriages start to look messy, that's not our signal to work longer hours, avoid hard conversations, bury ourselves in our kids or the finances or hobbies or even the church. That's our signal to start living up to God's intention for us.

And that takes courage.

Especially in the middle of a marriage where you love the person sitting at your dinner table but the trajectory of the daily minutiae all around you feels like it has a life of its own. Redirecting that trajectory can feel like a battle.

But in great battles, God often starts by first redirecting the hero. Like Gideon. In Gideon's time, the Israelites had been long pummeled by the Midianites. And Gideon didn't understand. "If the Lord is with us, why has all this happened to us?" (Judges 6:13).

I don't have any.

"Go with the strength you have, and rescue Israel from the Midianites. I am sending you!" (Judges 6:14)

The idea was absurd to Gideon. Gideon's was the weakest clan. Gideon was the least in his whole family. He was completely underqualified.

God gets it. Battles are confusing. Daunting. We often don't feel capable to make changes happen. Gideon thought the same thing—and he was right!

But this is the God who is known for triumphing most through one motley crew of characters after another: David was the smallest, Jeremiah was too young, and early on an apostle said, "Can anything good come from Nazareth?" (John 1:46)

It's possible. That's all there is to it. He does all his greatest stuff with the tiniest or the worst or the least likely. Your messed-up marriage will fit right in.

The trick in a marriage is to tackle circumstances without attacking the ones we love. God can help with that. He knows about love. Even in battle.

"But if you are afraid . . . " God said to Gideon. " . . . you will be greatly encouraged" (Judges 7:10-11). God sent Gideon off to catch details of a dream about a loaf of bread knocking down a Midianite tent—which completely encouraged Gideon.

Should that mean something to me?

It meant something to Gideon.

Gideon knew about that kind of loaf. Barley. Second-class to the tastier, more expensive and sophisticated choices at the time. Round. Usually small. And it crushed a behemoth Midianite tent just by … showing up? That can personally encourage a second-class guy with a small army afraid to face off against behemoth Midianite forces.

God is personal. In personal relationships, your feelings matter to the ones who love you. And nobody loves you like God.

Gideon overthrew one enemy after another, with God's help. Reading about his success brought me back to an earlier dialogue, when Gideon said something to God that was simple and honest: "Don't go away . . . " (Judges 6:18).

God did not. And he will not go away from you.

Keep reminding yourself: your marriage matters to God. After all, Jesus' inaugural miracle was turning water into wine at a wedding! And he didn't skimp. First the jugs were filled to the brim, and then the master of the banquet said of the wine: "You have kept the best until now!" (John 2:10).

Chin up, friend. Shoulders back. Walk with courage, even if it feels like a last-ditch effort. This God has a way of saving the best for last.

Janelle Alberts is a freelance writer, focused on integrating Bible stories into daily life. She and her loving husband enjoy their two wonderful children most of the time.