I wanted my husband to do what I needed God to do.
Alexandra Kuykendall 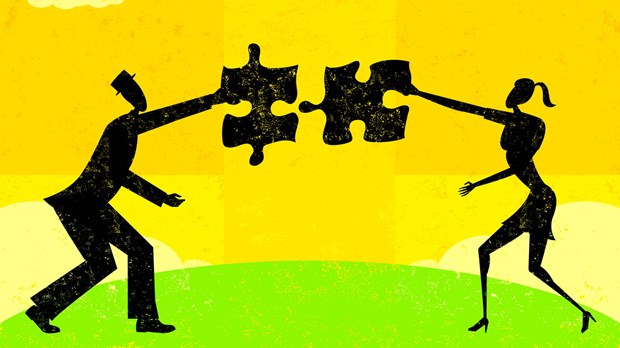 "I'm expecting" is a grand open-ended statement of two little words loaded with hope. As a mom of four, I have lots of experience saying them, sometimes with excitement and sometimes with exhaustion. Each time I've been waiting for the baby, other expectations weren't so obvious. The dream of fulfillment, or unconditional love, or a stronger connection to my husband. They were unique expectations based on my distinct mess of personality and life experiences. What I was "expecting" with my fourth pregnancy was much different than my first, because I knew more about motherhood and I'd grown as a woman.

Though we associate the phrase "I'm expecting" with pregnancy, we could just as easily use it for engagement. Because we all bring both spoken and unspoken expectations to the altar on our wedding days. I even brought plenty I wasn't aware of. In the moment I couldn't have articulated the expectations if I'd tried, because I didn't know they were there until I was living in the context of a real marriage.

Having grown up with a single mother my entire childhood, my expectation for marriage felt pretty open. I didn't have a good or bad marriage to use as my model. It was simply void, like white, the absence of color; I suffered from the absence of marriage. I did have a few fantasies—at the time I would have described them as hopes. That I would be happier, more fulfilled, with my husband. In a sense, that he would "complete me."

And then real life happened. We lived on a shoestring budget with my paycheck from supporting migrant high school students for Catholic Charities. My husband was a full-time graduate student. Despite the fact that we lived in rainy Portland, Oregon, our apartment was beyond hot for six months of the year. Dinners didn't magically appear and the dishes didn't magically disappear. The reality of the "work" involved to maintain life, not to mention our relationship, was a letdown. Why was I still wanting more when I had what I wanted: a loving, stable, supportive husband?

It wasn't until a year into my marriage that I had the epiphany. I was putting expectations on my husband that no human could fulfill. When I had dreamed of what marriage would offer, I had dreamed of emotional fulfillment, filling the empty places that existed in my heart. For so long I'd thought, "When I'm married … then I'll be happy." Because I thought marriage was the answer to my heartache.

Growing up without a father, my understanding of boys, and later men, was complicated. I didn't trust them to stay around, I tested whether I could get their attention, and once I knew I could I moved on. They were mysterious and desired all at once. I met Derek knowing that what I desperately wanted was a husband who would not leave me. A force of security who would protect and provide for me and tell me I was worth protecting and providing for. During my epiphany moment I realized I'd expected my husband to fill the holes left by my father. Holes of insecurity and disappointment and mistrust. Holes resulting from life in a broken world.

So really, those holes could have been caused by any array of hurts. In my case they were specific to my father. I was expecting Derek to save me from my unique wounds of life that I brought with me to marriage. Save me. As in, be my Savior. I had misplaced all kinds of expectations onto him, requiring abilities and responsibilities that were humanly impossible. Only my Redeemer could redeem. And his name was not Derek, it was Jesus.

But just acknowledging my misplaced hope was not enough. Because I wanted my husband to fill those hurt places. Unlike our mysterious God, Derek was tangible. He could hug me and take care of my physical needs in a way I could see, touch, and feel. I wasn't willing to change until I realized how unfair it was to set up my husband for my constant disappointment and recognized that I would never be satisfied with this arrangement of expectation. I had to change for Derek's sake. For my sake.

I had to, actually still have to, do a few things to break the pattern of misplaced expectation of healing.

It is a practice, a repetitive action that feels more natural the more I do it. I am rewiring my expectations, my first responses, and as I do I can feel myself relaxing, becoming more confident in where I stand in my marriage, allowing for a more vulnerable and honest union. Has it totally gone away, this tendency toward fear? No, and it may never. But the more I proactively fight these messages, the more secure I feel, which helps me the next time those instinctive responses pop up. In the end, I'm free to accept my husband's generous love.

Alexandra Kuykendall shares her journey through childhood, marriage, and motherhood in The Artist's Daughter: A Memoir (Revell). She lives in Denver, Colorado, with her husband, Derek, and their four daughters. She is on staff at MOPS International (Mothers of Preschoolers). Connect with her on Twitter @alex_kuykendall or on Facebook at www.facebook.com/AlexandraKuykendall.author.