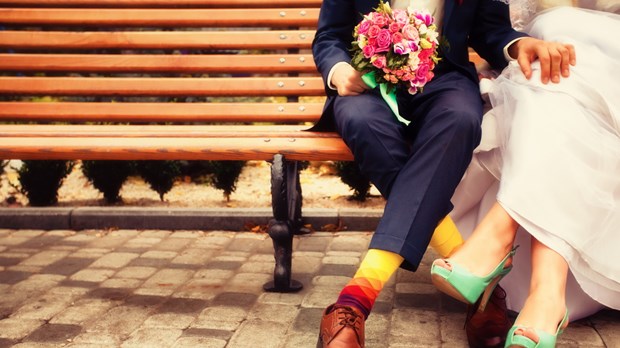 My mom got married at age 22. She met my dad in college, stalked him at a few basketball games, went to a school banquet, and was engaged after several months.

Like my mom, I also went to college. But that's where the similarities end.

After college I started working and never looked back. Well, actually I did look back. But it wasn't until my 30th birthday, when I sat on the couch with another piece of birthday cake and asked myself, "Um, what happened? Why am I still single?"

I'm now 42 and (still) single. The weird thing is, I've always wanted to get married. I mean, I assumed I would get married. I wasn't a man-hater who wanted to go it alone in the world. I wasn't antisocial. I wanted a story like my mom's, though naturally with less hardship and more disposable income (I'm a Gen-Xer, after all).

But it hasn't happened. I've got a cool job, comfortable home, close friends, and a full schedule. I'm a secure modern woman in every sense of the word.

But I still hope for marriage.

Maybe that sounds desperate and sad. Maybe it sounds old-fashioned. I guess I don't care. One thing's for sure: I know I'm not alone. I know because I hear from hundreds of single women who want the same thing, but the script isn't being written to their liking either. They wonder where they went wrong, and what they should be doing differently now—if it's not too late.

I've spent plenty of time obsessing, too. I've wondered whether I'm too "strong" to attract a guy's attention. Or maybe I'm too chatty, opinionated, or tall.

I've wondered if I'm supposed to be married at all.

I've had to let all of that superficial second-guessing go. Most of it can't be changed, and much of it shouldn't be. I am who I am, and that's okay. Most of the time, it's great. And as a Christian, I believe in a God who has my back. He loves me perfectly, has crafted my future, and isn't giving me a secondhand story while he makes other girls' dreams come true.

But at the same time, there's no shame in looking back and learning from past mistakes. And I've made a few. They're the kind of mistakes that more and more young women are making while our mothers and grandmothers stand by and shake their heads.

The young women entering adulthood today are not just hoping for marriage—they're expecting it. In fact, according to Mark Regnerus, more than 90 percent of today's young women say they want to get married someday. But at the same time, nearly 40 percent of women 15–44 have never been married.

If you'd like to get married someday to a mature, responsible guy who loves you, stop worrying about your crow's feet and cat collection, and learn what I learned only a few years ago. Here are five things about dating and preparing for marriage that I wish my mom had told me:

Marriage doesn't come about when the stars align and you lock eyes with someone across the room. That happens in movies, but not real life. I wandered through my 20s assuming that a great guy would stumble into my life. Meanwhile, I worked long hours, hung out at an all-women's gym, moved around the country and thought about marriage about once a year. Nope, marriage comes to those who prepare for it, are open to meeting quality people, and are living intentionally and realistically. They have chucked the idea of finding "The One" for the opportunity to give sacrificially in a relationship and expect the same in return. The years I spent waiting for John F. Kennedy, Jr., to fly to Colorado and find me at Starbucks could've been spent more productively. Just sayin'.

I grew up being told that I was just as smart, funny, capable and full of potential as the boys. Fine. So why did I always have to prove it? Starting in high school and continuing until, oh, a few years ago, I was in direct competition with the men in my life. In school, in the workplace—even at church. At the same time, I was every guy's buddy. I hung out with them, debated them, even dressed like them (hello, baseball jerseys and Chuck Taylors). This effectively made me invisible. I also found plenty of time to put guys down, belittling them at every opportunity. All in good fun, right? Not really. I found myself giving my guy friends advice on winning the hearts of the girls they liked; you know, the girls who were fun and kind, not sarcastic and self-important like me.

Click here for more articles on singles and dating.

When it came to my dating life, it was feast or famine. For years I didn't date anyone. Quite frankly, no one was good enough. And I didn't want the hard work of really getting to know someone. After all, shouldn't love be easy and fun? But after years passed without finding the perfect guy, I took the opposite approach. I dated almost anyone. I became the girl who gave guys chances. I dated guys who were directionless, jobless, homeless, anything-remotely-interesting-about-them-less. There's danger in being entitled and saying you deserve nothing less than perfection; that's being a princess. But there's also danger in throwing yourself at anyone who comes calling. Set your (realistic) standards, and stick to them. Standards should reflect character, integrity, life responsibility, and common goals. Anything less is a waste of time.

There's also danger in throwing yourself at anyone who comes calling. Set your (realistic) standards and stick to them.

Women are notorious for giving up too much for very little in return. In relationships, it's usually time, attention, emotional connection, affection, and sex. We give it all with no expectation of commitment or even exclusivity. For me, I gave guys access to my time and emotions far too early on in a relationship. I was always available, always willing to talk, and always an open book. Where was the mystery? More telling, where was the motivation to pursue me when I was already throwing myself at their feet? Ladies, if you've been pseudo-dating that guy for five years, and it's not going anywhere, guess what: It'll never go anywhere. Cut the string and free yourself up for a guy who is in it to win it.

The modern idea of dating has us working as lone rangers. We've abandoned the idea of dating in community. This is a bummer, because who better to help you sift through potential marriage partners than the people (usually family and friends) who know and love you best? Instead of sitting alone late at night scrolling through online dating profiles, get your besties on your team. Let them know of your desire to marry, and put them to work. Be willing to be set up. Give them veto power over losers and abusers. Finding a healthy match is a group project. It takes a village. And that village will stand by you once you are married.

I've heard all the platitudes. The thing is, no matter how many times I'm told that my guy is still "out there" or that my time will come, there's no one who can take charge of my relationship future like I can.

After 50 years of marriage to my mom, my dad died of cancer. My mom and I are both single now, and she feels my pain. The other day she told me, "People have told me I should remarry, but I'll never find anyone like your dad. Besides, you can't seem to find anyone, so I don't know what kind of luck I'd have."

I hear you, mom. It's a rough scene nowadays–much more so than when you were in the market for a mate. But I'm getting wiser every day.

And I remain hopeful.

Lisa Anderson is the director of Boundless.org, a website for young adults who want to grow up, own their faith, date with purpose and prepare for marriage and family. She also hosts a popular weekly podcast, The Boundless Show, where she leads discussions on timely issues, interviews authors, artists and other newsmakers, facilitates Q&A, and volunteers far too much information from her personal life. She runs to counterbalance her love of pastries and chicken tikka masala, and often quotes her mom, who's known to say outrageous things.