My husband and I have given up on trying to change each other.
Dorothy Littell Greco 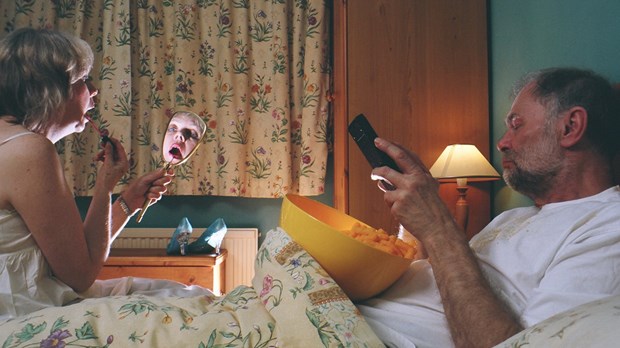 My husband and I had a rather unique path down the aisle to "I do." Our relationship, round one, was characterized by times of idyllic friendship which inched us toward emotional intimacy, which resulted in him hitting the eject button. Repeatedly.

Whenever he said he needed space, I obeyed the letter of his law but not the spirit. Within a month, we were back together, typically because of my charitable, good nature (read: I was a skilled manipulator). This cyclical drama culminated in a proposal (we had a good week) and a short engagement. Not short because we planned a quick wedding, but short because he panicked and called everything off.

His decision precipitated two years of separation, two years of counseling, two years of coming to terms with some significant fears and broken patterns of relating–for both of us. By the time he re-initiated contact, we had each made significant progress toward relational wholeness. This time, his proposal stuck and we celebrated our nuptials with friends and family who admittedly remained somewhat suspicious of our sanity.

During our 22 years together, he has never freaked out and I've never manipulated him (one of these is true). However, on more than one occasion, we have sailed through some serious turbulence.

Though we share many things in common (faith, blue-collar background, education, and passion for the arts), we have had to navigate significant personality differences. He's Italian. He likes loud, sustained conversations that go well into the night. I like to be in bed, with a book, at 9:00. He thinks I fail as host if there's not five times as much food on the table as our guests could ever eat. I hate wasting food. He has TDD (Time Discrepancy Disorder–don't bother googling it. I made it up.) I've learned that when he calls to tell me he's leaving work, I need to ask, "Define leaving. Is your computer browser still open or is your key in the ignition?" Little things these. To quote Eeyore, "We all have our ways."

In addition to our sometimes opposite personalities, we also have areas of inherent weakness—places within us which are not fully developed. I tend to shut down in conflict, mostly out of fear that my out-of-control words will draw blood. During a fight early in our marriage, he had to wait almost an hour before I could articulate one complete sentence about what was going on for me. To hear him recount this, he felt as if he were covered in fire ants with his hands tied behind his back. Conflict does not intimidate him; his fear surfaces whenever a power tool is needed. Saw a piece of clapboard to replace what the dog gnawed off as he chased the chipmunk? Not happening. Ever.

In such situations, we can feel disappointed with each other. While it might be good for a laugh now and then, long term, these near misses land couples in the lawyer's office. We all enter marriage with specific, though often unspoken, expectations about what our husband or wife needs to/ought to/should be. Some of these expectations are godly and necessary in order for a marriage to work: fidelity, honesty, partnership, and countless others that form the foundation of a solid marriage.

If these were the only types of expectations we carried down the aisle, the divorce rate would drop significantly. Whether we realize it or not, each of us downloads countless expectations during the course of our lives. For instance, my dad can fix anything. If he doesn't know how, he will figure it out. I assumed my spouse would at least try to do home repairs. The fact that he doesn't occasionally irritates me. His mother prepared Thanksgiving dinner with turkey and all the trimmings as well as antipasto and two trays of lasagna—with extra sauce on the side. It frustrates my husband that I simply can't recreate his family's abundant table.

We've tried to change each other via some combination of advising, teaching, manipulating, pleading, praying, and "helping." I will surprise no one as I write that none of these tactics work. In fact, I would argue that all of them actually cause the marriage to disintegrate.

The only strategy that has been remotely helpful has required a paradigm shift. Rather than give up on my husband with an exasperated sigh accompanied by a requisite droop of the shoulders, I consciously choose to accept him, limitations and all, and simply refuse to judge or reject him. I call this holy resignation.

Holy resignation permits me to appreciate my husband and his many extraordinary qualities without needing him to be someone else. Because this is not my default, it requires both intentionality and faith. By intentionality, I mean that I have to pay attention when feelings of irritation surface and then ruthlessly push their little heads back under. This is not denial—my eyes are wide open. Such counterintuitive behavior necessitates an ongoing dialogue with Jesus in which I repeatedly ask him to provide me with the requisite love, mercy, and patience. Remarkably, he does not seem troubled by the routine nature of my need!

My husband may never pick up the circular saw—and I may never replicate his mother's Thanksgiving—but by choosing this path, we have discovered how to truly prosper despite our many differences.

Dorothy Greco spends her days writing, making photographs, pastoring, and trying to keep her three teenage sons adequately fed. She and her family live surrounded by apple orchards, just outside of Boston, MA. You can find more of her words and images at www.dorothygreco.com and on her Facebook page.