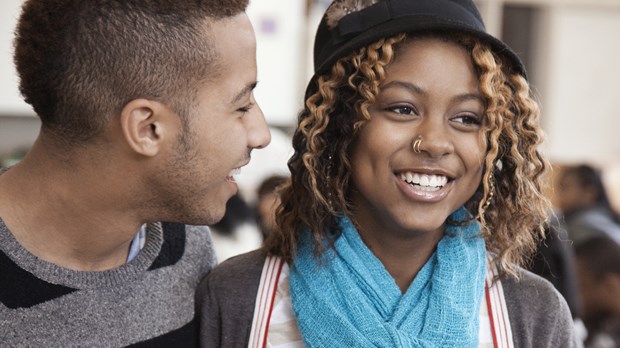 That’s when my dating got out of control.

Really, I was trying to make up for my 20s, which were basically a dating wasteland. Thinking I had all the time in the world, I had used my 20s to focus on my career. I put dating and marriage on the back burner, assuming if I became successful and self-actualized, a smart, funny, godly, and incredibly hot man would snatch me up as soon as I put myself on the market.

But then my 30s arrived, and smart, funny, godly, and incredibly hot single men were hard to come by. Where were they? Why weren’t they lining up to take me on hot-air balloon rides and moonlight hikes? Didn’t they realize after a decade of climbing the corporate ladder, I was finally ready to meet my practically perfect Prince Charming and settle down?

Reality hit as my phone stayed eerily silent and my Saturday nights sadly date-free. This prompted a semi-freak-out whereby I decided to take matters into my own hands.

I entered the season of Too Many Chances.

Armed with lowered expectations and memberships to at least five online dating sites, I started chatting with, meeting, and dating guys from all over the world.

There was the guy from Portland. And San Francisco. Oh, and one from the Netherlands (hey, far be it from me to let language, culture, a couple continents, and an eight-hour time difference stand in the way of true love). I even managed to date a few guys from my own town. All of these men were professing Christians—surely that was enough?

I was sure that with my stellar example and considerable influence, these guys would turn out just fine.

I was torn. In my 20s, I’d kept my 50-item list of Things I Want in a Future Husband close at hand. I’d written it in junior high after hearing an especially zealous talk on purity during Sunday night youth group. It fed my lofty expectations and kept me from dating, well, pretty much anyone. But now, determined to make up for lost time, I chucked the list, closed my eyes, and opened the relationship floodgates. What flowed through was a tsunami of ambiguity and excuses.

San Francisco wanted a prenup—was that really a big deal?

Should I be concerned that Portland’s previous dating relationship had lasted nine years?

I figured Jesus could work all these things out. I needed to be less picky. We’re all sinners—works in progress who need grace each day. I was sure that with my stellar example and considerable influence, these guys would turn out just fine.

But cracks started to show. Upon closer inspection, maybe I wasn’t okay with my husband-to-be’s friends being frat-boy losers. I guess I actually did want a man who could fight biblically instead of walk away. Maybe minimizing past addictions and ignoring solid counsel was actually a relationship red flag.

Most of this was discovered in the wake of substantial heartbreak. Because, not surprisingly, I’d let my hopeful and moderately desperate self get attached to these guys. The process of separation was hard. The return to sanity was slow.

But when all was said and done, I recognized (and grieved) my foolishness. I also acknowledged my need to establish strong guidelines for dating and evaluating a potential mate—guidelines that walked the delicate balance between unrealistic expectations and a disregard for truly important qualities. Here’s what I learned:

Lists aren’t bad, but we need to decide what’s truly important and what’s not. A Christian who is growing in his faith, under godly leadership and accountability, is humble and teachable, and has an awareness of and hatred for his own sin is critical. And he should be in a position to marry. Jobless, irresponsible man-boys need not apply. But his height, hair color, singing ability, Myers-Briggs profile, career, and a host of other preferences are utterly negotiable. Always have your list in mind. But your list should have about five things on it; everything else is subject to preference, prayer, and the guidance of the Holy Spirit.

Look for Potential, Not Perfection

You want a godly man. Wonderful! But remember, you’re not perfect, and neither is he. Look for trajectory—a guy who’s eager, growing, and about the business of taking his faith seriously without needing to be pushed, nagged, or tricked into spiritual maturity. Many women falsely assume they’ll marry a John Piper or Francis Chan. They have a picture of spiritual leadership in their heads and will accept nothing less. But remember (this is especially for you young women), Piper and Chan weren’t Piper and Chan at age 23. Their wisdom has been cultivated over a lifetime. Look for a guy who is a work-in-serious-progress; who leads where he is, is tackling his sin head-on, and is more mature now than he was a year ago. Ask around. What do others think of him? What do his interests, activities, and attitudes say about him? Is he known and respected at his church? Is he serving regularly? Actions don’t lie.

Admit it: when you are into a guy, you tend to lose your mind. We all do. We throw objectivity out the window and start overlooking the serious stuff—things that should be relationship deal-breakers. A good safeguard for this is to get a team around you—people who are godly, no-nonsense, and willing to be honest with you. These should be mentor-types, preferably older, wiser, and married. Don’t withdraw into your relationship. Bring it out into the light and allow others to observe it. Let your team grill you and your boyfriend on anything they choose, whether faith, character issues, past relationships—you name it. And then, when they bring up concerns, listen. And act. Don’t make excuses for your man. If they’re speaking truth, give them the authority to make demands of your relationship. Even to the point of ending it. Seriously. Take it from me: godly mentors and counselors will save you a world of heartache; don’t underestimate their value.

The best way to find something great is by knowing what to look for. Pinpoint the marriages in your family, church, and beyond that are solid, growing, Christ-centered, and grace-filled. Identify how those couples deal with the big stuff of life as well as the mundane. I guarantee none of them will say they have perfect marriages. How have they learned to live with their differences? What do they say are the keys to a happy marriage? Put yourself in their way. Invite them over to your place for dinner. Pepper them with questions. Don’t be ashamed to ask for their help. You’ll be glad you did.

God’s still in the business of making good matches. He loves marriage; he created it, after all.

All of us will “settle” in relationships, even marriage. We have to, because sinners marry (and disappoint) sinners. Our unmet expectations will become increasingly obvious as we grow closer to others. Even our own sin patterns will startle and discourage us. But take heart: God’s still in the business of making good matches. He loves marriage; he created it, after all. What’s more, he’s out to redeem relationships and strengthen, use, and glorify himself through the ones that are fully committed to him.

Lisa Anderson is director of young adults for Focus on the Family and host of the popular weekly radio program and podcast “The Boundless Show.” Lisa is a frequent guest on radio and TV, and speaks around the world on relationships, faith, and the many challenges facing today’s young adults. Her first book, The Dating Manifesto: A Drama-Free Plan for Pursuing Marriage with Purpose (David C. Cook), will be available in August 2015. She lives in Colorado Springs, Colorado.