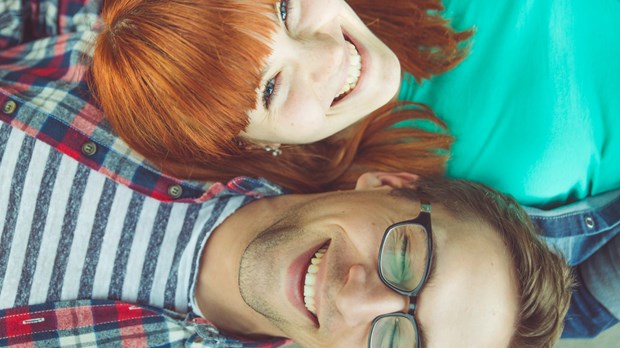 Neither of us "needed" to get married. Both of us were independent and for the most part, content in our singleness. Paul dreamed of living alone on a boat off the coast of Newport Beach, California; Halee had plans to travel the world teaching English overseas. Yet there we were, barefoot on a sandy beach outside Santa Barbara, making our vows to the sound of rushing waves crashing on the shore.

Make no mistake, we were (and still are) head over heels for one another, but neither of us needed marriage to make us happy because we were already happy in our singleness. We understood—even then—that our marriage was ultimately more about our moral development than personal satisfaction and contentment. And that day, we washed each other's feet in the surf to symbolize our commitment to serve each other to that end.

For most of human history and in most societies, the goal of marriage was to provide economic security through family alliances and to serve as a context for procreation. To marry for personal happiness (or love) was considered a selfish act that disregarded the needs of the broader community. It wasn't until the 12th century that the troubadours (a group of traveling poets) introduced the concept of courtly love as we know it today.

Still other groups have emphasized the spiritual goals of marriage. The Catholic church believes marriage is a sacrament because the relationship between husband and wife represents the union of Christ to his bride, believers. In 1930, Pope Pius XI proposed that the primary purpose for Christian marriage was not procreation or sacrament, but to serve as a context for moral development. He writes, "This mutual molding of [spouses], this determined effort to perfect each other, can in a very real sense, as the Roman Catechism teaches, be said to be the chief reason and purpose of matrimony."

The trouble—even for contemporary Christians—is that we often approach marital issues in an individualistic way. In the cornucopia of Christian marriage self-help books, the guiding questions seem to be along the lines of "What can I get out of this?" or "How can I cope in this marriage?" rather than "What are we forging together?" or "How can our marriage make us each more like Christ?" It's not that God doesn't want our marriages to bring us deep satisfaction and happiness, it's just that marriage is bursting with opportunities for deeper spiritual growth—opportunities we may be missing if we're not asking all the right questions.

But what do these opportunities look like in everyday life? How exactly can marriage make us more holy? Here are a few small, specific ways God has used marriage to carve virtue into our character.

Prudence. Often translated "wisdom," the word prudence comes from the word providence, which means "to see ahead." I (Halee) can be candid to a fault. I've always had a knack for saying exactly what I think at the very moment I think it—regardless of the impact it has on the hearer. Early in life I'd seen how damaging it was to bury emotions, so in an effort to avoid that mistake, I made the equal and opposite error of expressing myself without a great deal of forethought.

But when we married, I noticed that my honesty was more divisive than it was beneficial to our marriage. I saw the impact my words had upon Paul, and I started to pay attention to how he communicated with me and with others. Paul knew what to say and the right moment to say it. He spoke thoughtfully, ensuring that his words contributed to the well-being of others. The truth didn't always have to be painful.

Because of his daily influence, I've learned how to be more tactful in the way I say things. It was a difficult transition, especially in the beginning. During this period, Paul taught me his "three-day rule." When I was tempted to respond to someone quickly and brashly, I took three days to think it through and pray. Eventually, I didn't need to practice the three-day rule in order to exercise prudence in my daily interactions with Paul and others. I was able to "see ahead" and discern what words would best build up the other person.

Courage. C.S. Lewis called courage "the form of every virtue at the testing point." Courage isn't the absence of fear as much as it is the willingness to move forward despite fear. Throughout our marriage, I (Paul) have seen Halee demonstrate courage over and over. She applied (and was hired) for jobs I thought she needed more experience for. She speaks regularly in front of hundreds of people even though she's terrified of public speaking. The night our daughter was born, I caught her crying for a single minute (when she thought I wasn't looking) as the labor pains intensified. She went on to brave 16 hours of labor to bring our daughter into the world.

I don't like to get out of my comfort zone, but seeing Halee exercise courage over the years gave me the courage to quit my job in the middle of the recession. I'd been working for the company for 14 years, and I'd known God was calling me to leave the company for a long time, but I couldn't imagine leaving after all the years I'd put into the company. I was afraid, wondering how I would be able to provide for my family. But eventually, I did quit and moved into the work that God had called me to.

Temperance. St. Augustine wrote, "Complete abstinence is easier than perfect moderation." Temperance is the ability to practice moderation in action, thought, or feeling. I (Halee) have never been good at moderation; I always seem to operate in extremes, whether in work or play. It wasn't enough to have one job while going to school when I had time enough for two (or three). It wasn't enough to run three miles when my daily goal was five. It wasn't adequate to pick up the clutter around the house when the floors needed to be mopped and the baseboards scrubbed.

It wasn't long into our marriage when I discovered Paul didn't share this "value." He was a diligent worker, but he didn't feel compelled to put in excessively long hours. When we took the same course in graduate school, he was content with an A- (or even a B+!) while I sweated it out for an A+. When he cleaned the house, he didn't always dust or mop or polish the leather couches. When we climbed mountains, he didn't need to go to the top—he was content with going halfway. For him, it wasn't so much about the destination as it was the journey along the way.

Believe it or not, this difference in our approaches to things was one of the biggest sources of conflict in our marriage. But more often than not, his temperate approach was the better way, and even if it doesn't always come naturally, I've learned to practice moderation in various areas of my life.

Charity. Charity is the highest, the most important of the three theological virtues (faith, hope, charity). Charity is agape love, unconditional, self-sacrificing love. Thomas Aquinas describes it as "the most excellent of virtues … the habit of charity extends not only to the love of God, but also to the love of our neighbor." A mistake many people make in marriage is fighting for their "rights" when charity—or love—requires that we lay down our "rights" for God or for the sake of others.

For example, guys sometimes think they have a "right" to their own space or their own time (like a night out with the guys), but I (Paul) realized that the perceived "rights" I had were really selfish aspects of my character that God wanted to change through our marriage. When I surrendered my rights—like cutting short a night out with friends to take care of Halee when I knew she'd had a long day at school or work—I became more diligent, motivated, and sensitive to others' needs.

Marriage provides a daily context for spiritual growth because it gives us opportunities to put away sinful tendencies and practice more virtuous behaviors. The Roman lyric poet Horace wrote, "To flee vice is the beginning of virtue." Every action we take has a consequence for our character. Our actions become habits and habits, like grooves on a well-worn path, become our character.

Paul Scott is a registered therapist specializing in drug, alcohol, and sexual addition. Prior to this role, he served in leadership for Every Man's Battle for 13 years. Dr. Halee Gray Scott is an author, independent scholar, and researcher. She is currently writing a book to help Christian women leaders thrive in ministry. The Scotts live in Holland, Michigan, with their two daughters, Ellie and Viv.