Mandisa, ninth place finisher of the 2006 season of American Idol, has lost more than 100 pounds since her appearance on the show. The Grammy-nominated recording artist released her most recent album, Overcomer, in September of this year, as a bold proclamation in her belief "the greatest overcomer lives inside of all of us."

The biggest thing for me on my journey was discovering I have resurrection power inside of me—that if God could raise a man from the dead, he can get me off the couch and onto a treadmill.

What did you learn from performing on American Idol?

For me being an American Idol is living your life in such a way that when people look at you they want to pattern their lives after that. It makes my skin crawl a little when I hear the term American Idol, because we know the term "idol" is not something Christians look fondly on. I try to look past the vocabulary and live in a way that reflects well on Jesus. That's not to say I'm perfect. As a matter of fact, my last album, What If We Were Real, was me learning that God is not calling me to perfection. He wants me to pursue being perfect, but he knows that we are dust. He knows that we live in a fallen world, and that we are prone to sin.

What's been the highlight of your life post-American Idol?

On February 15, 2011, I officially lost 100 pounds since the end of the show. It was one of the best moments of my life. The biggest thing for me on my journey was discovering I have resurrection power inside of me—that if God could raise a man from the dead, he can get me off the couch and onto a treadmill. Sometimes we think we have to depend on our strength alone, but as followers of Christ, we have the strength of God inside us. Realizing that became everything to me. The fact is, God is not concerned with our appearance: he's concerned with our health, and he wants us to treat our bodies as temples of the Holy Spirit. I learned that this is about more than a number on a scale or a reflection in the mirror. This is about honoring God with my body, and when I make that my motivation, it helps me to resist temptation more. 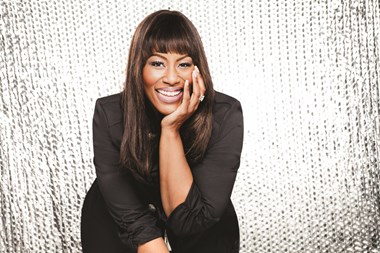 What else do you do to resist temptation on a daily basis?

I had to recognize the weapons we fight with are not the weapons of the world. So for me, memorizing Scripture and going to the Lord in times of temptation are some of the biggest tools I have. It's what Jesus did when he was tempted in the wilderness. He didn't get in a debate with Satan. He quoted the Word of God out loud to him. In Ephesians 6, every single piece of armor we are to bear is a defensive weapon. The only offensive weapon we have is the sword of the Spirit, which is the Word of God. So I've learned to fight with the Word of God. I have spiral-bound note cards that have Scriptures pertaining to weight loss that I keep with me in my purse at all times. I've also memorized a lot of Scripture so that when I can't get to my cards, it's hidden in my heart.

Memorizing Scripture and going to the Lord in times of temptation are some of the biggest tools I have.

I can't tell you how many times I've driven past a Krispy Kreme "Hot Now" sign and have had to proclaim Scripture out loud. There's a supernatural element to speaking the Word of God out loud that helps me to resist, and recognizing that one day at a time—not looking at how far I have to go, or even how far I've come. I have a song on my album called "Press On" that evolved from recognizing I can't keep looking back at past successes or past failures. I really have to keep putting one foot in front of the other, and not get overwhelmed with how much weight I still have to lose. I ask myself: what can I do today? What healthy choice can I make today? How can I resist this temptation in this moment right now? Those things add up to get me where I've lost 100 pounds, and I'm still going. I still have many more pounds to lose. It's easy to fall back into temptation, but knowing I can choose every day to dust myself off and make a new decision that could change everything is helping me keep going.

My go-to is 1 Corinthians 10:13—"no temptation exists except what is common to man, and God is faithful." He will not allow me to be tempted beyond what I can bear, but when I'm tempted he'll provide a way out so that I can stand up under it. Also John 16:33 and 1 John 5:4–5: You're an overcomer—not by your strength alone, but because the greatest overcomer of the world, Jesus, lives inside of you.