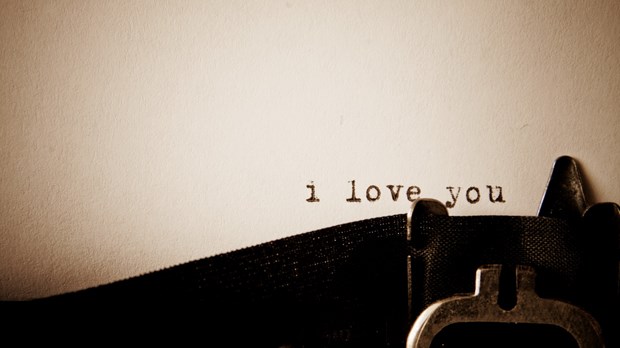 I'm a sucker for old-fashioned letters and old-fashioned romance, so I felt like a teenager at prom when I happened upon a book called Love Letters of Great Men. I waited all day before cracking it open, eager to sink my teeth into it as if it were the literary equivalent of dark chocolate.

At first I was savoring the letters—these epistles dating as far back as Pliny the Younger almost 2,000 years ago and capturing the words of some of the political and literary greats in the centuries since. I was taken by the beauty of the language, the permanence of the sentiments, and the artistry of the writers as they sought to capture their passion and pin it down with ink and paper. In short, I wanted to love those love letters.

But then something unexpected happened: I started digging up biographical information about a few of these "great men," and suddenly their words sounded less like soaring symphonies and more like discordant clanging.

Robert Burns may have been able to write letters of epic romance, but I can't help but wonder if any of his letters ever went to an unintended recipient, seeing as he was having simultaneous affairs with two different women (neither of whom he married, despite fathering children with both of them).

Napoleon may have written some poignant epistles to his wife while he was away on his military campaigns, but the sweet words sour when you realize that he and Josephine both took lovers while they were apart.

Henry VIII may have written some dramatic words comparing love to the sun, but those sentiments pale when you consider that he went through six wives.

I'm fortunate to have a husband who has a way with words and is romantic and thoughtful enough to write them down for me every once in a while. But unlike some of the "great men" in the book, he truly is great—he lives in a way that backs up the words. And truthfully, some of his best love letters aren't letters at all.

When I'm working late and I come home to find him scrounging through the pantry to pull something together for dinner, it's tangible proof of his love—better than any poetic words Robert Burns could have penned.

When my tears are spilling out and Daniel holds me close, saying, "The Daniel and Stephanie team is okay with tears," it speaks more love than a whole war's worth of Napoleonic letters.

And when Daniel gives up a perfectly lovely Saturday afternoon when he'd rather be riding his bicycle so he can install a new faucet in our kitchen sink, it might as well be a love letter from a king.

I should mention here by way of disclaimer that I'm not advocating that words and romance have no place in a relationship. I'm a fan of Gary Chapman's classic book on the five "love languages," and when I took a quiz to determine my own love language, I scored off the charts for words of affirmation. I even have a five-ring binder filled with the notes and e-mail messages I've received from Daniel since we started dating. I treasure his love letters—including and maybe especially the ones that say, "I'm stopping at the grocery store after work—what can I pick up?" or "I'm praying for you today."

I concur with the psalmist, who expressed that "beautiful words stir my heart" (Psalm 45:1). But perhaps this is true only when they're beautiful words with legs. With all due respect to those great men and to the romantics out there (myself included), I think all of us need more than beautiful words; we also need a lifestyle of love that tethers those words to the ground and makes them more than poetic flutterings.

If marriage is ultimately meant to be a reflection of God's love, and I believe it is (see Ephesians 5), then all of us who are married are called to follow Christ's example of what love looks like. Yes, God has expressed his love for us in words, requiring 66 books to record the extent of his love. But he also backed up that love with actions—with physical suffering and death on our behalf, with forgiveness, with the gift of his presence.

A Lifestyle of Love

So where does this leave us, in practical terms, for our marriages? If you lament the fact that your husband doesn't write you love letters and isn't as romantic as you wish he might be, I encourage you to look deeper, to find the love letters he may be sending that don't come with a postage stamp affixed to them. Letters that may look suspiciously like taking out the trash, dropping off the kids at practice, putting in a full day's work, or washing the dishes.

And I charge you with the same challenge I'm presenting to myself: What can I do today to give legs to my love? How can I live a lifestyle of love that backs up what I say? As Scripture says, "Dear children, let's not merely say that we love each other; let us show the truth by our actions" (1 John 3:18).

Maybe our relationships—and the world, for that matter—would be just a little brighter if all of us wrote a love letter today…and then did something to prove those words.

Subscribe to our free Marriage Partnership e-newsletter at this link for weekly marriage tips and encouragement for the joys, trials, and tribulations of marriage.

Stephanie Rische is a senior editor of nonfiction books at Tyndale House Publishers, as well as a freelance writer for publications such as Today's Christian Woman, Christian Marriage Today, and Significant Living magazine. She and her husband, Daniel, live in the Chicago area, where they enjoy riding their bikes, making homemade ice cream, and swapping bad puns. You can follow Stephanie's blog, "Stubbing My Toe on Grace," at stephanierische.wordpress.com.