My brave may look different than yours, but when we choose to step out and take risks, we are changed—and those around us change, too
Kat Cannon 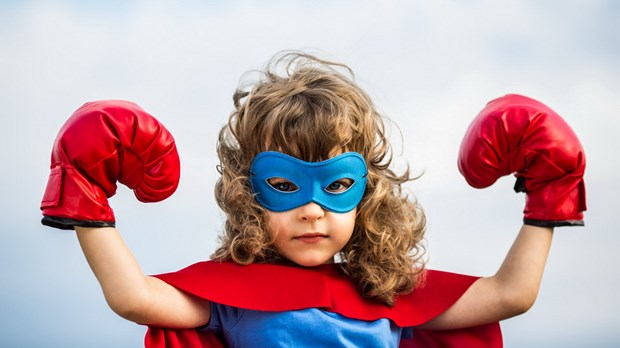 Here's a question: what if women want to be brave because God designed us that way? What if God had warrior princesses (with or without red hair) in mind as he fashioned Eve from Adam's side? It's not as crazy as it might sound.

"God's original team is male and female and his plan is perfect. We'd better think a little harder about this."

If we talk about female design, we'll have to start where God creates the woman as a helper (Genesis 2:18). God doesn't make another guy to share Adam's man cave. He makes a woman a feminine reflection of God's image. She's not exactly like the man; she's compatible and yet different—as any woman who's lived, worked or talked with a man knows!

What was God thinking? I wonder about that when my husband and I misunderstand each other yet again, or when my 11-year-old son exhibits "testosterone poisoning" with his gross noises. But God's original team is male and female, and his plan is perfect. We'd better think a little harder about this.

The word "helper" in Genesis 2 comes from the Hebrew word ezer ("ay-zer"). It's used 22 times in the Old Testament—twice in the creation story, and the rest in military settings with swords, shields and the like. Fourteen times, God himself is the ezer helping his people fight their enemies.

To my surprise, feminine warrior language shows up again in Proverbs 31. Traditional views of this passage make it a checklist for the ultimate godly female: a perfect wife, mother, and seamstress among other things. No one can measure up (which might be the point, since we all need a Savior!), and so many are tired of trying. Yet the opening words reveal a remarkable view of what God desires women to be.

"Who can find a[n] eschet chayil?" it says in Hebrew (Proverbs 31:10). Breaking it down, eschet is a generic term for woman. Chayil is more interesting and more fun to say with the "ch" way in the back of the throat. Translators render chayli in Proverbs 31 as "virtuous and capable" (NLT), "noble character" (NIV) and "excellent" (ESV). But the full definition includes an army or force to be reckoned with having valor and might, power and strength. Chayil shows up a whopping 242 times in the Old Testament, but refers to women only in Proverbs 31 and Ruth. In the vast majority of cases, it describes a soldier or war hero. For example, when the angel of the Lord calls Gideon to defend Israel against Midianite oppression, he says "Chayil [mighty] hero, the Lord is with you!" (Judges 6:12).

Woman. Chayil. Ezer. A brave warrior-princess created by God to help rule and subdue the earth alongside the man. Regardless of how we think about male headship or define gender roles and godly submission, what God says stands. No wonder women long to be brave.

Responding to the call

Too many of us don't know what God says about his female image-bearers. I recently explained the ezer concept at a Christian women's group. Afterwards, one woman who spent 40-years teaching women's bible studies said she never knew God made her an ezer. I don't think she's alone. Instead of looking to God, we've let others define us as weaker, less valuable, less important and less strong than we really are.

But our world needs us to be brave, and so do the men in our lives. After all, God said from the beginning "it is not good for the man to be alone." (Genesis 2:18) Suffice to say, the battle to advance God's Kingdom is far from over. Dania Heffington, assistant executive director for the Austin Bridge Builders Alliance, works with Christian leaders across the city, and says brave women must step up and step into Kingdom work.

"Because [God] made male and female, Adam and Eve," she says, "and he gave them both authority over the Garden. To not have the female present, you miss 50% of what God originally designed."

Instead of stepping up in godly ways, women tend to make one of three mistakes:

Instead, true godly bravery in women means living out Kingdom-minded lives no matter what anyone but God says or does. It's overcoming obstacles and taking risks for the sake of the gospel of Jesus Christ. It's putting our identities in him first and all of our other titles—including mom and wife and job—underneath.

Many scholars see women as reflections of God's nurturing nature, and more relationship oriented than our male counterparts. These characteristics plug us into the relational ground waters of our communities. If we're brave enough to pour our faith into that wherever we are, we could change our culture from the inside out. Sharmon Coleman, Chair of the Women's Steering Committee at Bannockburn Baptist Church, agrees.

What's holding us back? Probably a lot of things, but fear ranks the highest. We could be ridiculed. We could come up short. In some places, we could be physically hurt and risk our loved ones' safety. But there's probably more fear in our heads than our circumstances, says Cheryl Luke, Director of Women's Ministry at Shoreline Christian Center.

"If [women] have a desire to do something, which I believe is tied to their calling … if we would just take the step and move forward and realize that the people who have taken steps ahead of us or people who are pursuing their dreams, they probably faced the same amount of fears."

And when one woman does it, Cheryl says, she opens the door for others to follow.

So let's do it. Be brave. Let's stick our toes in the water and see if God parts them to clear the way for us (Joshua 3:15-16). And my brave will look different from yours. I have a friend who is brave by embracing her bipolar disorder and stepping out to mentor others with mental illness. Another woman reaches out to those enslaved in brothels and strip clubs. Still another overcomes her fear of going back to school and studies to be a sonogram technician at a local crisis pregnancy center. This woman over here shakes off her nerves to speak in front of people and teach bible studies. That one over there dares to believe God loves her like a princess and refuses to accept abuse in her marriage. It might be brave for you to love a harsh parent, forgive a friend's betrayal, contact the sibling you haven't spoken to in years.

But whatever it is, when we make the brave choice to live out Kingdom kind of lives, we are changed and those around us change, too. We become more like Christ, who bravely faced the Cross to open the doors to His kingdom. We can't leave the men to fight the battles alone. Not when God designed us as chayil ezers - to be brave.

Kat Cannon serves as the Women's Ministry Director at First Evangelical Free Church (FEFC) in Austin, Texas. Her desire is to build REAL relationships among women and with God, and her ministry hosts the annual Brave Women's Conference for women from all over the city. Kat is married to Derry Cannon, and has two children, Liana (13) and Devin (11).