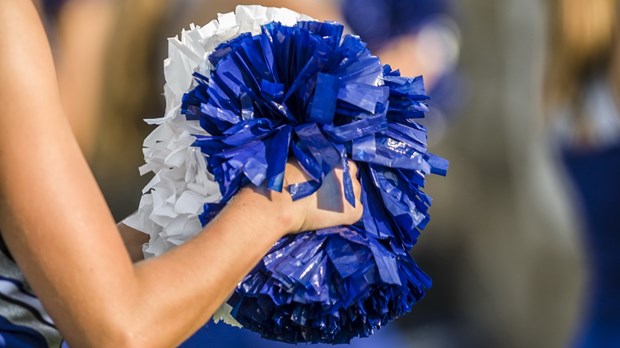 There are a pair of tiny gold pompoms tied with a blue ribbon in my four-year-old daughter's dress-up bin. Late each night after practicing on the turf at our professional facility, the other cheerleaders and I would scour the yard lines for pieces of tiny gold scraps of plastic that may have escaped so we could leave a clean field for the team to play on. I would then wander back through the weight room, jump in my dented up '99 SUV, and head back home to my family. As the only mom on the team, I earned the affectionate nickname "Mama." It was only fitting that a friend bundled up a bunch of pom scraps and made a custom pair for my daughter.

Often times when someone at church finds out I was a NFL cheerleader, I get an awkward grimace usually followed by a nice, "Oh, cool."

Last November, when I took my baby with me to go vote at the neighborhood polling place, my cheeks flushed red-hot as I looked up and saw my swimsuit spread splayed on the back wall of Joe-next-door's garage. When my oldest daughter sees the scantily-clad women high-kicking in their boots on TV during Sunday's football game, she shouts, "Look, Mommy! It's you!" Though the world tells me I should celebrate being one of 28 women chosen out of over 400 auditioning to dance for the professional team, a root of shame had begun to take hold of my spirit. I wish that I could say, "and then I had a Paul moment, found Jesus, and he turned my life around," but in my case, it was quite the opposite. I already had Jesus.

After having my first baby, I became so focused on doing something "for myself" that I hushed away the Holy Spirit's conviction and the catcalls and basked in my 15 minutes of fame. And it was fun. Watching my favorite football players just feet away from me? Surreal. Making kids with cancer smile? Heart-wrenching. But when the stadium lights went dark and I wiped off my red lipstick for the last time, all that was left were pictures of me in nothing more than big hair, a bathing suit and go-go boots.

Left with the dissatisfaction of worldly acclaim, the words "hottest dance team in the NFL" started to taste like ash on my tongue. An unrest at the one-foot-in and one-foot-out Christian life I was living began to agitate my soul. Fed up, I poured myself into Scripture, searching again for the One I knew could give me my purpose back. I needed him to be my center again, the lynchpin that could bring all of the spokes of my life back into focus. Night after night I laid in bed agonizing over my flesh, begging Jesus to squeeze out every last drop of the "me" that so loved to be the center of attention. Over and over again I felt him draw a bath of grace for me, reminding me of his love and faithfulness, even when I was unloving and unfaithful. Second Corinthians 3:18 (ESV) says, "And we all, with unveiled face, beholding the glory of the Lord, are being transformed into the same image from one degree of glory to another." As I pressed in and simply beheld his glory through his word, he graciously began to transform me.

One by one, I started picking up the pom scraps.

"I was never called to look pretty on the sidelines. I was called to be a player."

The remnants of my glittery past, scattered and crumpled, coated with worldliness and pride, were to be found, bound, and made into something beautiful. Good memories and hard lessons learned were something I could tie up in a ribbon and pass down to my own daughters. You see, the field I left a shimmering mess was never meant to be—I was never called to look pretty on the sidelines. I was called to be a player. I was told in his word to put my gear on and get ready for battle. To play for the team, and not for myself. To work in that weight room and not just wander through it. To put the poms away and get out there to tackle the enemy, gaining yardage and pressing forward toward the goal.

First Peter 4:1-2 says, "Therefore, since Christ suffered in his body, arm yourselves with the same attitude, because he who has suffered in his body is done with sin. As a result, he does not live the rest of his earthly life for evil human desires, but rather for the will of God." Since I have been crucified with Christ, I do not live anymore. The purpose of my life, the will of my Father, is that he would be glorified. That HE would be made famous in me; to my children, to my family, to my neighbors and friends, and to whatever further extent his good will should require. I am a player on his team; I have been assigned a position that was fashioned for me before the foundations of the world were laid—nothing could be more fulfilling to me than operating in that position. He purchased me with his blood, a foolish, attention-mongering mess, chosen to make much of Christ. Changing by his grace alone.

What the enemy meant for harm, God meant for my good. Though the shame of self-glorification kept me paralyzed from pursuing God's calling on my life to serve my family and others with Christlike abandon, God helped me shine a light on the darkness and move past my sin into greater sanctification as I began to lose myself in him. Head over heels, I'm now experiencing his abounding love as I wrestle with my cross daily, remembering his great love and continuous mercy on me. I don't want to be the shiny one on the sidelines anymore. I want to be covered in mud, blood, and sweat, with matted hair and skinned up elbows, celebrating with my team as one who played well. We've got the home field advantage. And we're gonna win.

Amy Barnes is a writer, speaker, mother, and former NFL cheerleader. Connect on her website, www.loveabounding.com.