5 steps to take before sharing your convictions
Laura Turner 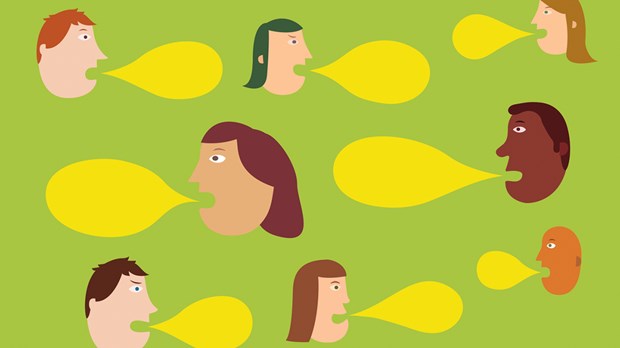 Christians often struggle with the disease of terminal niceness. We avoid conflict, shy away from hard conversations, smile and say we're fine when we're not. Somehow, the core message of Jesus has been replaced with a sort of bland commitment to niceness.

On the Internet, people are accountable for their behavior in very different ways than we are in person. Because we are likely to surround ourselves in real life with people who tend to think and believe the same way we do, it is often the case that we only stumble upon opinions very different from our own when we are online. And because we are behind a computer screen and not across a table from another person, we can sometimes allow the very worst parts of us to have free rein. Dallas Willard once wrote, "Feelings make excellent servants, but terrible masters," and this is just as true about the state of our online discourse. If I read something I disagree with and follow my feelings to respond, I am prone to be concerned with things like proving I am right. But to follow the example of Jesus, whose confidence was in the character of God and not in what anyone else thought of him, I have to be willing to let go of my own emotional response.

To that end, I've been trying to walk through five thoughts each time I feel compelled to respond quickly online. They are principles rooted not in the desire to be right or to be heard, but to be faithful and patient—to recognize and pursue the fruits of the spirit everywhere, especially in our lives online.

If we read a blogger with whom we disagree, it is not our job to point out where we think they have gone wrong and strong-arm them back to orthodoxy.

1. Don't assume the role of the Holy Spirit.

It is the Holy Spirit that convicts, searches, and sanctifies us in the mysterious community of the Trinity. The good news for us is that we are freed from the burden of having to draw doctrinal lines in the sand or deciding which sins are worse than others. That's simply not our job, and to pretend that it is denies the work of the Holy Spirit. If we read a blogger with whom we disagree, it is not our job to point out where we think they have gone wrong and strong-arm them back to orthodoxy.

2. Check in with your own spirit.

Is it bitter? Angry? Calm? This one may seem like a given, but as someone who has written for a variety of Christian outlets, I can tell you from experience there are some people who are quick to respond from a place of self-righteousness rather than a posture of learning–myself included, at times.

Passages like Ephesians 4:29 and Luke 6:45 remind us that the heart and the mouth are intimately connected. What we say is most often a reflection of what we believe at our deepest center. So when we demean other people in our words, what we are actually reflecting is nothing more than an inner problem with our own hearts. You can disagree with an idea without belittling the person from whom it comes—and, in fact, as Christians, this is what we must do. God does not delight in us throwing ideological stones at one another.

You can disagree with an idea without belittling the person from whom it comes—and, in fact, as Christians, this is what we must do.

3. Give the other person the benefit of the doubt.

This is probably the most difficult one for me. If I disagree with someone online, in the darkest parts of my heart I want to ascribe nefarious motives to them. But I actually need to question my own motives before I make assumptions about anyone else's. Remember what the prophet Jeremiah said: "The human heart is the most deceitful of all things, and desperately wicked. Who really knows how bad it is?" It would be very convenient to think that what we're talking about here is someone else's heart—someone else with problems worse than my own, someone else who's gotten it really wrong. But the truth is, the deviousness of the heart is embedded in every last one of us, and my first responsibility is to be honest about the state of my own heart.

When the news broke that World Vision had decided to hire people in same-sex marriages (and before the decision was reversed two days later), the online response was swift. People questioned whether Rich Stearns, the CEO, was really a Christian at all: "The leader of WV claims to be a Christian, yet doesn't even know what the Gospel is," wrote one commenter. When people dropped their sponsored children at World Vision to the tune of 10,000 kids over 2 days, those who had sided with World Vision's original decision were quick to condemn them for preferring to "starve children then [sic] employ some gay people in head office." Whatever your thoughts about employment and sexuality, it is safe to say that very few people would rather see a child starve than see gay people employed at World Vision. Which leads me to the next point . . .

4. Love your neighbor by representing them well.

While it is easier to characterize a person you disagree with as all bad, that's generally not the case. The person behind the blog you dislike or the Twitter account you roll your eyes at is still, at the end of the day, a person. And as Christians, we have a responsibility to other people to tell the truth. If I extrapolate that someone wants children to starve based on their decision to take support away from World Vision—even if I disagree with that decision—I am participating in a culture of lies. Representing others well takes more time, nuance, and conversation than painting them with broad and dismissive brush strokes. It is hard work. But it is the only kind of work that will build relationships rather than further damage them.

5. It's okay to disagree—just be civil.

In his excellent book Uncommon Decency, Richard Mouw laments the fact that it is often those with the strongest convictions who are the least civil people. When our love of being right trumps our love of other people, something has gone terribly wrong. John recorded Jesus saying that the world would know his disciples by our love for one another. Sadly, if you were to judge by the comments section of almost any Christian website, there doesn't appear to be much love going around. As long as there are people, there will be disagreements. We must learn to disagree with one another in a spirit of gentleness and humility. It is very possible to say to someone, "I understand what you are saying, and I disagree with you," and leave it at that. Getting rid of conflict is not the goal; the goal is handling inevitable conflict with grace and kindness.

Laura Turner is a writer and editor living in San Francisco. In addition to being a regular contributor to Christianity Today's Her.meneutics blog, she has also written for Books & Culture, The Bold Italic, and Religion News Service.