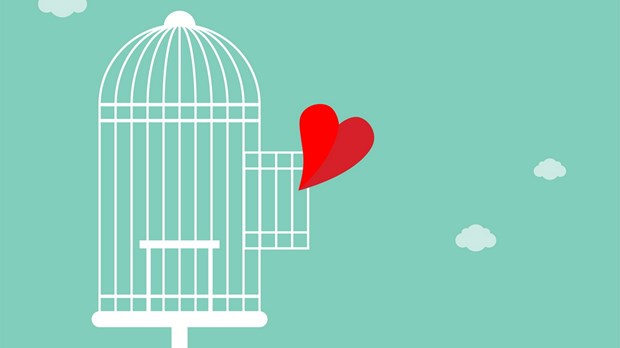 "Are you okay?” my new small group leader asked as I slid into a chair at the round table one recent morning. I was late and everyone was talking, but the conversation suddenly stopped and all eyes were on me, and for good reason. My shirt did not cover up a bunch of wires connected to little suction cups attached to my skin and the bulky battery box at my waist.

I’d already had a long morning: driving a friend to the hospital for an outpatient procedure at six o’clock without telling her I was in A-fib, which is a racing, irregular heartbeat—an increasingly worrisome problem for me. Later on my way to Bible study, I stopped by my doctors’ office and a nurse slapped a heart monitor on me, telling me to wear it for the next 48 hours.

By the time I got to Bible study, I felt embarrassed, worried, and on the edge of tears. Now I faced a choice: How much would I reveal to this group of women, some of whom I hardly knew? How vulnerable was I willing to be?

As I started to talk, my eyes got teary in spite of my determination not to cry.

“I’m okay,” I responded, surprised at my wobbly voice and the tears that started spilling out, along with some descriptions about the heart monitor, my recent symptoms, and my fears.

Somebody found a box of tissues and plopped it down near me, which escalated the drama and made me feel more self-conscious. “I hate crying in front of people,” I admitted. Several women nodded their agreement, and one asked if she could pray for me, which she did.

Later, when I walked back out to my car, I reflected on my vulnerability. After taking care of someone that morning and keeping my A-fib a secret, I was done being brave. But had I said too much? Did I appear overly emotional and weak? I felt a little cringe but I also felt known and understood by this circle of women, my new small group.

That’s the thing about vulnerability. It’s about letting our true selves be seen, which can feel both risky and rewarding. Being vulnerable takes courage, but it also connects us to others. God has wired us for connection and given us a longing to be known and to know others. He wants us to live in a way that connects us to him and to one another. But we often thwart that connection with self-protective shields that become barriers to healthy relationships. Barriers that keep us from experiencing the intimacy that both we and God desire.

Maybe we’re not even aware of what we’re doing. When someone asks, “Is everything okay?” and everything is not okay, we often don’t want to talk about it.

We might assume the people asking don’t really want to know. Or that we shouldn’t bore them with our petty, little problems. Or we’re afraid we might get all teary if we start talking about “everything.” Who needs that?

What would they think if they knew we have anger issues or watch afternoon soap operas or we’ve never read the Bible all the way through?

The biggest barrier for most of us is the fear that others will think less of us if they know more about us. What would they think if they knew we have anger issues or watch afternoon soap operas or we’ve never read the Bible all the way through?

Vulnerability takes courage because it opens us to the possibility of rejection. We feel ashamed of our flaws and try to hide them because we fear they make us unlovable. So they become our secrets.

My friend Karen grew up in a family who taught her not to “air our dirty laundry.” So she didn’t tell anyone when she got pregnant in college—not even the guy she’d been with that night. When she finally told her parents, they helped her get an abortion quickly, and never mentioned it again. Her family motto was “Don’t tell,” so Karen didn’t tell the man she fell in love with and married. But one day she realized she couldn’t keep her secret any longer, so she told him as he held her and assured her that he loved her. That moment became faith-shaping as Karen began to understand that his love was an extension of Jesus’ love, freely given in spite of knowing the truth about her. Slowly she began to believe that Jesus loved her, and finally, she felt worthy and lovable because she had the courage to tell her secret.

“It is important to tell, at least from time to time, the secret of who we truly and fully are—even if we tell it only to ourselves—because otherwise we run the risk of losing track of who we truly and fully are, and little by little we come to accept instead the highly edited version that we put forth in hope that the world will find it more acceptable than the real thing,” Frederick Buechner observes in his book Telling Secrets.

Our flaws don’t keep us from him; they draw us to him because where we are weak, he is strong.

Vulnerability takes self-acceptance. The Bible tells us to know the truth, and the truth will set us free: the truth that the God who created us knows every messy and broken thing about us and still loves and forgives us. Our flaws don’t keep us from him; they draw us to him because where we are weak, he is strong. He accepts us for who we are so that we can accept ourselves—so we can be honest about who we are and confront the fears we face. When we share those fears, we realize we don’t have to face them alone.

Practicing the art of vulnerability

As I understand more about the power of vulnerability, I’m trying to practice living with more honesty, which means recognizing how often I edit my public appearance to fit the stereotype of a “good Christian”—someone who never lets the sun go down on her anger, never lets any unwholesome talk come out of her mouth, and certainly doesn’t worry, because God tells her not to.

My practicing has created an annoying voice inside me that catches my dishonesty.

If I end a conversation with a nonchalant, “I’ll keep you in my prayers,” I hear the voice: Seriously? You know you’ll forget. So I’m trying not to say it unless I mean it.

When I arrive late for a meeting, making excuses about the bad traffic, the voice says, You’re late because you didn't leave on time. I can apologize for the real reason.

I push myself toward risking, especially in safe places like my Bible study that morning. I could have answered the “Everything okay?” question with information about the heart monitor, but that wouldn’t reveal anything about my emotions. When I described feeling afraid and even ashamed that I don’t have enough self-discipline to eat less and exercise more and avoid stress, like healthy people do, I revealed something deeper about who I am. But I stopped short of admitting I can down almost a whole pint of salted caramel gelato right out of the container because I don’t seem to have a “stop button.”

We always have a choice about how much we reveal. Are we with people who have earned our trust? Who know to hold our words in confidence when necessary? Who will be our advocates when we are not present? Do we share bits of ourselves to see if they can handle some of us before we hand over all of us?

Allowing our vulnerability to encourage others

This I know for sure: Our vulnerability is contagious. Going first and talking about our true selves encourages others to go second.

This I know for sure: Our vulnerability is contagious. Going first and talking about our true selves encourages others to go second. My friend Karen told her story about her abortion in the Stories ministry I co-lead in our church, describing how she told her husband about the abortion after years of feeling as though she was in bondage to her secret, and how his loving forgiveness set her free. Several women came up to her afterward and said, “You just told my story. I’ve never told anyone. Because you did, maybe I can.”

In my Bible study, after I emotionally admitted my fears, some of the women acknowledged their own fears about their life circumstances. We got to know each other better that day.

Our vulnerability—admitting who we are with all our imperfections—makes us more compassionate and empathetic with others who are also messy and broken. I want to be a person who allows others to be vulnerable with me. To be a safe person. To listen well. To empathize.

Surely God wants us to share our lives and challenges with honesty and vulnerability because others find themselves in our stories—and they also find him.

I have this quote above my desk from Oswald Chambers, which shapes my passion for helping others share their stories: “If you are going to be used by God, he will take you through a multitude of experiences that are not meant for you at all. They are meant to make you useful in his hands.”

We are useful in his hands when we share who we are with one another. Our vulnerability is a gift because it helps us recognize our need for community and deepens our connections in emotionally healthy relationships.

Who needs that? We all do.

Carol Kuykendall helped launch and now leads a Stories ministry for women in Boulder, Colorado, where she lives with her husband Lynn and within driving distance of her three adult children and their families. She’s authored and co-authored nine books, and writes for Guideposts and Daily Guideposts. She teaches Storytelling, encouraging others to be vulnerable in shaping and sharing their stories.