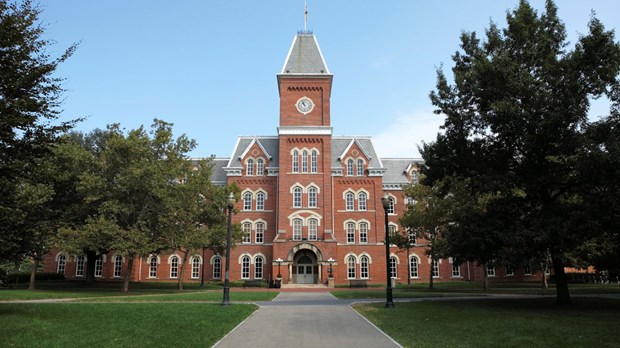 When I was 17, God called me to a secular college. As far as I knew, he hadn’t "called" me too often before then. I found—and still find—mapping out God’s will very complex. You pray, seek wise counsel, and sometimes just do things, trusting that God will reward those who sincerely seek him (Hebrews 11:6). Growing up as a Christian, as I had, can be like living in an echo chamber of God’s whispers. You can convince yourself he’s a spy passing you missives through every verse of the day or sermon shared on social media. Coincidence or calling? That’s the ultimate question.

But this was different. It was April of my junior year of high school. I sat on the amphitheater steps at my little youth group’s first-ever retreat, twiddling my pen while our speaker loaded his slides. Last month, I’d toured three Midwestern Christian colleges with my two best friends. I’d been thinking of branching out from my safe and tight-knit homeschooled circles, where the only non-Christian I regularly interacted with was my dad. It was time, maybe, to go to a secular school.

But those Christian colleges. They were warm and familiar. I liked visiting them.

“God is there,” said our speaker. “Don’t be afraid to get out of the boat.”

The speaker’s slides flashed onscreen. He was preaching on Matthew 14, the story of Jesus calling Peter to walk on water. It was familiar to a Sunday school veteran like me—how the trembling disciples thought he was a ghost, how Peter called out, “Lord, if it’s really you, tell me to come to you, walking on the water” (verse 28).

“God is there,” said our speaker. “Don’t be afraid to get out of the boat.”

In the semidarkness, my pen froze.

I’m an indecisive person. I’d felt that nudge to step out in faith, but I also thought successfully navigating a secular university, after growing up in such a small, safe community, would be about as possible as walking on water. I was feeling up for a challenge, sure. But only in theory—I thought maybe I’d apply to a few Christian schools and a few secular schools to delay the decision a little longer.

“Okay, then.” I capped my pen and whispered at my shoes, pretty sure that God was listening. “Secular school it is.”

The first plot twist was that, one year later, I enrolled in my state’s flagship university. It was my last choice of the six colleges I’d applied to, and it was all wrong for me. Too sports- and math-focused, too close to home, and, with an undergraduate enrollment of more than 26,000 students, way, way too big. But financial reality and a rash of unexpected rejection letters had forced me into it. The coming change was now a lot more radical than I’d bargained for.

So I took matters into my own hands. An afternoon on Google revealed that my new campus had more than a dozen campus ministries. I sat on my bedroom floor the night before move-in with my laptop and an index card, copying down every welcome week event: the Navs ultimate Frisbee tournament, the RUF barbecue, the Cru meet and greet. There were so many that I had to continue onto the back of the card. I’d be booked up every afternoon and evening through Labor Day, which was a relief. Maybe I was moving into a dorm full of strangers, but I would be able to find my church people. Maybe I was leaving a tiny, quiet world for the chaos of a thousand different lives and experiences crammed into one dorm block, but I would have an oasis. I could ensure my safety.

Maybe I was moving into a dorm full of strangers, but I would be able to find my church people.

Fast-forward to Wednesday evening of welcome week. I had barbecued, Frisbeed, mingled, mixed, surveyed, and spent almost every waking moment away from my dorm. It was 6 p.m. and, according to the index card, there was another barbecue on North Campus, a mile away.

My feet were blistered.

I fingered my index card as laughter rang out from the end of the hall. Most of my hallmates were down there. I’d spent a night with them on move-in day when a hurricane poured half a foot of rain on our campus, canceling everything. We’d shared YouTube clips and laughed like we weren’t missing home. I liked them, but, I thought stubbornly, they were not church people. To keep my faith secure, I had to find church people, I had to be somewhere secure . . . right?

But I just wasn’t up for the barbecue that night. Putting the index card aside, I opened a Netflix window on my laptop instead.

And then a week passed that way.

Though I was quiet and disliked meeting new people, I thought I had a foolproof strategy: following the advice of trusted Christians, seeking out faithful fellowship, and planning ahead. Surely God wouldn’t let all the crowds and strangers wear me down. But of course this wasn’t true—he would let them wear me down, to show me I was missing the point. I was trusting in myself to make it through this change. Was my method bad? No, but he’d asked me to step out of the boat and trust him—and I’d tripped up on the second half.

I was scrambling to find my place, but God already had me exactly where he wanted me.

Surely God wouldn’t let all the crowds and strangers wear me down. But of course this wasn’t true—he would let them wear me down, to show me I was missing the point.

Not long after my defeated Netflix binge began, I joined my honors program’s Saturday scavenger hunt. I sat cross-legged on the columned front porch of my dorm, eyeing my nervous freshman teammates. An aggressively peppy sophomore had us all give our names and our ideal travel destinations; I said New Zealand because a missionary from my church had moved there and it seemed beautiful.

Across the circle, a girl with a feather in her short brown hair perked up.

When we’d finished, she introduced herself: Grace, basement floor, pastor’s daughter from Upstate New York. She wanted to find a Bible study, but she didn’t know when the campus ministries met. I loaned her my index card. That Thursday, we sat next to each other at Cru’s large group gathering.

By a stroke of providence, I had just met my future best friend.

A few days later, the guys from the floor below knocked on my door, desperate for girls to
join the dorm’s coed intramural soccer team—they’d have to forfeit without us. I decided to give it a try. The team was a happy group of unathletic but eager freshmen like me, and our 20-minute walk to the fields was perfect for striking up conversation. One thing led to another, and before we knew it, it was three in the morning. Most of the gang from down the hall—almost a dozen people—had sprawled on my roommate’s bed, tossing the “talking stick” (my thermos) back and forth to keep order in a lively and longwinded theology discussion. We came from a kaleidoscope of backgrounds: Protestant, Catholic, Jewish, agnostic, atheist. We had just realized how much we could learn from each other.

Moving forward, they would be my gang. I joined Cru as well—and later, shared a room with Grace and a third Christian friend, Lynne—but it was those first friends who made the difference.

Choosing a secular college taught me that God rescues and provides in every circumstance.

God himself had dropped them quite literally at my door, as far as I was concerned. He’d seen me trying to leap from the safety of one boat to another, running like Jonah from who he’d called me to become. And he stopped me. It took a little exhaustion, and a little Netflix, but finally I heard him again: not distinctly, like junior year, but in a quiet assurance that I could trust him to provide. There was no need to feel overwhelmed by change and no need to be scared for my faith—God is so much bigger than all that.

It is my junior year again. Four years later he is still everywhere—on this huge campus, behind the girl with the feather in her hair, and in the laughter of my bright, curious hallmates. Choosing a secular college taught me that God rescues and provides in every circumstance. It rarely happens the way I expect—it’s rarely what I think is ideal—but his handiwork is still unmistakable. I don’t have to “manage” things; I don’t have to doubt. He was there freshman year; he is here now; he will be there in the days and adventures to come.

Lyla Lawless is currently a student at the University of Maryland, and she writes a weekly blog about locally sourced, student-friendly cooking for The Diamondback. Follow her on Twitter at @lylalawless.