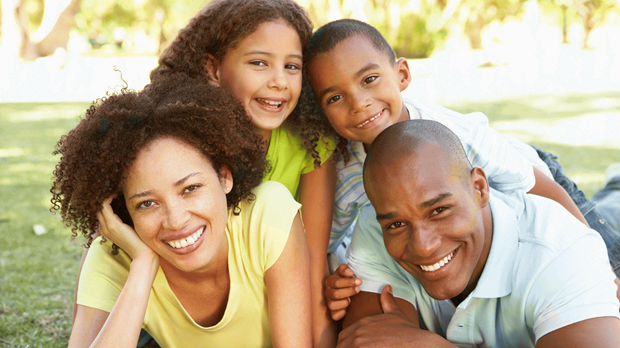 "So, is this your aunt?” the teacher asked, looking at me. I was at a parent-teacher conference with my stepson and his mom, and we had just discussed how the year was going for my stepson in her classroom. The teacher knew his mom, but she didn’t know me.

“No, this is his stepmom,” Michelle, my husband’s ex-wife, interjected. The teacher looked at our son, and then at the two of us standing there together. She smiled.

“It’s important what you guys are doing,” she said. “I’m a stepmom too.”

Earlier that afternoon, my husband called from work to say he wasn’t able to join us for the meeting because of an unexpected obligation. We had planned to go together, meeting his ex-wife and our son at the school. When he couldn’t go, I wasn’t sure what to do. My husband understood if I didn’t want to go alone, but he supported me if I did.

I texted Michelle. “Steve can’t go. Do you still want me to come?” Would our son be comfortable going with only a mom and a stepmom—but no dad?

Michelle said yes. She wanted me to come. When we met later in the parking lot, she asked, “Is this going to be awkward?”

“Probably,” I said as we walked toward the front entrance. “But I’m used to it by now.”

The Key to Blended-Family Happiness

Being part of a stepfamily is nothing new to me. My own parents divorced when I was 11, and I’ve had many years of navigating the complicated relationships of a blended family. I have been a stepdaughter, a stepsister, a step-granddaughter, and a step-aunt. But only in the past two years have I been a stepmom. It’s the hardest role of all—but not for the reasons people think.

My husband and I aren’t married to his ex-wife, but sometimes our relationship with her takes on the same complexity and requires the same type of compromises.

“You guys are so lucky you all get along,” people often tell me when I talk about my husband’s ex-wife. It’s true; we have a wonderful relationship. We sit together at soccer games. We share a pew with the boys between us at church. On Christmas, birthdays, and other special occasions, we are all together at one house or another. But it’s not because we are lucky.

We work hard to communicate with each other and make the boys’ best interest a priority. My husband and I aren’t married to his ex-wife, but sometimes our relationship with her takes on the same complexity and requires the same type of compromises. When people tell me I’m lucky we get along, I think about how much easier it would be to avoid her or to resent that she is part of many of the decisions my husband and I make. Life would be simpler just to say no to every favor she asks or to give in to the jealousy I feel when the boys prefer her to me.

Last Halloween, the boys were scheduled to be at our house for the night—we share custody and have them with us every two or three days. But as is normal for holidays, we were all going to spend the evening together at Michelle’s house passing out candy to trick-or-treaters. That afternoon, though, the wind picked up, and the rains came, and when a tornado watch was issued, city officials canceled trick-or-treating. That meant our plans were canceled too. I didn’t want the entire evening to be a bust for the boys, though, so I decided to make homemade doughnuts as a special treat.

When Steve and the boys got home that evening, our middle son announced their mom was taking them to Dairy Queen. Steve confirmed the news, adding that Michelle would be picking the boys up shortly. She was taking them to a friend’s restaurant for free hotdogs and then out for ice cream. My chest tightened. Tears filled my eyes.

“But I was going to make doughnuts . . .” I said after the boys left the room. I was hurt that I hadn’t been consulted on the change of plans.

“I’m sorry,” my husband said. “I didn’t know what you were planning. Michelle didn’t want there to be nothing for them.”

Our complex web of relationships provides lots of opportunities to love, forgive, and serve one another.

Refusing to budge, I decided to go ahead and make the doughnuts while the boys were gone. I would offer them for breakfast the next day. When Michelle arrived to pick up the boys and saw me pulling out flour and eggs, she asked what I was making.

“Sounds good,” she said, quickly adding, “Oh no, were they for tonight?” She clearly felt bad.

“No, go ahead. The boys are looking forward to it,” I countered, trying to suppress my normal passive-aggressive tendency. I play a good martyr when I’m hurt. “We’ll have doughnuts for breakfast.”

What really happened is after the boys got home that night from eating hotdogs and ice cream, they also had doughnuts. (They are boys with big appetites, after all.) They also had a mom and a stepmom who loved them, who both wanted to create special moments and lasting memories for them. The night could have ended differently—my hurt feelings made it tempting—but I not only care about the boys, I care about Michelle too. When it came down to it, I knew her decision to take the boys for ice cream wasn’t about me, just as the doughnuts weren’t about her. We were both just doing the best we could. When the night was over, we were still friends.

A History of Different Families

Sometimes, I wonder what it would be like to have a simpler family: one dad, one mom, a few kids. But then I think about the family stories of the Bible. Though divorce was not a common factor during those ancient times, death from childbirth, instances of polygamy, and even the tradition of the kinsman redeemer made families much more complicated than our romanticized ideal. Abraham was Sarah’s husband and half-brother. Boaz was Ruth’s second husband. Joseph was technically Jesus’ stepdad.

True, the family I joined when I married my husband is complicated. But I don’t have to dig too far to find that is true of most families—since the very first family, in fact. And our complex web of relationships provides lots of opportunities to love, forgive, and serve one another.

Recently, Michelle texted me to make sure she and I were doing okay because at church that evening I had seemed sad and distant. I was happy to assure her I was not upset with her in any way, though I did admit our family situation was feeling a bit overwhelming to me. Even after two years, I can still feel like an outsider.

Her response drew me right back in. “I hope one day I am just your friend with no stress or other labels attached (ex-wife or the boys’ mom),” she wrote. “Just know I always think about you and try and be sensitive to you with the decisions I make . . . Hang in there! It is all so worth it. You are one amazingly strong woman.”

Besides the boys, that’s one thing we have in common.

Charity Singleton Craig is a freelance writer and editor, serving as a content/copy editor for The High Calling, a contributing writer for Tweetspeak Poetry, and a staff writer for Curator Magazine. She is the co-author of On Being a Writer. Connect with her at CharitySingletonCraig.com, on Facebook, or at @CharitySCraig.