Temptation toward my own gender is not going to separate me from God.
Jane Thomas* 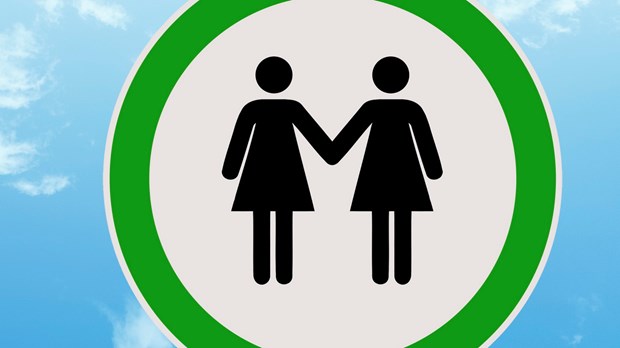 In third grade, I knew I was attracted to the girls in my class. I thought, uh oh, this isn't normal—why is this happening? In the church I grew up in, no one talked about homosexuality, so I didn't tell anybody. I hid it. I pushed it back. Whenever homosexuality was mentioned, it was joked about. "Those types of people" were alienated and outcast. No one would hang out with them—if anyone was around them, it was to make fun of them.

When I got to middle school and high school, I started to dig into the Bible to try and understand what was going on, because those feelings were starting to affect my friendships. I read through the Bible passages in Genesis, Romans, Corinthians, Thessalonians, and Timothy over and over again, and tried to figure out how God views this. I came to the conclusion it's something God doesn't desire, but it was still a desire ingrained deep in my heart. I didn't understand why those desires were there if I wasn't allowed to follow through with them. I battled with those questions on my own for a really long time—even into college.

I felt dangerous. I didn't think there was any hope for me. Because the label "same-sex attraction" hadn't come out, I thought I was gay. I thought every day I was sinning. I felt I was dead to God—that I was a defect, and that there was no room for me. If I had those desires, I was sinning. And that made me really sad. Because if God couldn't love me in my same-sex attraction, then who could love me? I became depressed in middle school, and that stuck with me into college.

I felt dangerous....I thought every day I was sinning. I felt I was dead to God—that I was a defect, and that there was no room for me.

I still didn't tell anyone about my same-sex attractions in college because I was afraid I'd be hated, and that people would find me disgusting. I prayed, read books, and studied the Bible intensely. I went to lectures and conferences about sexuality on my Christian college campus. My friends started coming out to me. When a few of them started dating each other, that broke my heart more than anything, because I started thinking, if these Christian girls who love the Lord could start dating each other, then maybe it was okay. But I knew it wasn't okay in my heart. It wasn't what God wanted for me.

Through all of my reading and study, I discovered there's a difference between homosexuality and same-sex attraction, just like there's a difference between sin and temptation. I didn't realize the term "same-sex attraction" even existed until the end of my time as an undergraduate, when I understood that same-sex attraction in and of itself is not sin against God. Same-sex attraction is misplaced desires for the same sex that need to be given up to God, while committing to a homosexual lifestyle is denying God glory or presence in your life. It's sinful to be in a homosexual relationship. But that doesn't mean repentance is not available to them; it's when repentance happens that grace can become overflowing.

A couple of years ago, just after I graduated from college, one of my friends told me she struggled with same-sex attraction and was coming out of a same-sex relationship. When she opened up to me about her struggle, I empathized and sympathized with her by speaking truth and helping her see things more clearly the best I could, but I'd still never told anyone about my own struggle—until I decided to tell my sister. I don't know how I finally got up the courage. I called her up several times, and when I finally got it out, I was crying so hard it was barely coherent. But when I told her, she told me she loved me no matter what. She was so compassionate.

From there, I opened up to my roommate, Sarah, who was also a huge blessing. She plugged me into her church community and was able to help break down the isolating walls I'd been putting up for 23 years. I lived with her for two years before I finally built up the courage to tell her I struggled with same-sex attraction, and after I told her, she didn't let it become something awkward or weird—she said, "I know who you are, Jane, and I love you for that." She took the time to listen to me and love me despite my fear of rejection. She truly had the love of God in her.

I've been able to tell a few other friends at church who recognized my struggle and how I was trying to give God the glory in it. They recognized how hard it was to deny those things, and they were encouraged by my story. I wondered how it was possible for them to be encouraged by something I saw as distasteful, disgusting, and degrading. But I guess it's the fact God has worked through me.

The fear of rejection

I'd love for everyone to know everything about me because I want to be known. But I feel I can't be completely known because of this specific struggle. It's embarrassing. I'm not supposed to struggle with this—I'm a Christian. I'm a leader. The fear of rejection is a big fear of mine, even though a few of the pastors at my church know about my struggle and still let me serve there.

I've also never told my parents about my struggle because I don't want it to become their problem, and I'm afraid that's what would happen—that they would try to "fix me." But I'm not something to be fixed. I always thought if I told them, they would sit in silence and ignore what I said, or would try to "de-gay" me. But you can't just take that part out of someone. If that were the case, God would have done so a long time ago—he knows how hard I prayed that prayer.

The temptation of same-sex attraction is not going to separate me from God, but the sin without an unrepentant heart could.

I wouldn't mind for a lot of people to know about my struggle, but in sharing, I have to make sure I'm responsible about it. Not everyone will be able to come alongside me in a way that's going to be healthy for them, and also healthy for me. I wish I could freely tell people, "This is my struggle, I need your help, and I can't do it on my own," because I did it on my own and was depressed for years. I felt I wasted those years. I couldn't truly be happy or free with people. I felt so numb and dead on the inside. I wasn't able to feel joy or warmth, and I never want to go back to that place. I want to be happy-go-lucky and carefree, and I want to feel I can love people and not be hindered by the fear of being a dangerous person to them. In allowing myself to actually love people and let them love me back, I don't have to fear rejection for who I am or what I deal with.

I know my attractions don't define me. Over the past few years I've been affirmed in my womanhood, both by people who know of my struggle and those who don't. I love people not knowing my struggle because they see me how I should be: the struggles I face don't become something that mars me in their eyes. It's also enjoyable to know I can tell people I trust, and have them still love me and affirm me in my brokenness.

Through understanding my desires, impulses, and deep feelings, I know God loves me. I know he's bigger than what I'm dealing with. The temptation of same-sex attraction is not going to separate me from God, but the sin without an unrepentant heart could. I may not necessarily ever be freed from misplaced desires, but I know they're a lie—they're not what God made me to be.

*Jane Thomas is a pseudonym for a writer and teacher living in the Midwest.