It's nine weeks into the New Year and the confetti, fireworks, and noise makers are a faded memory.

And so are your New Year's resolutions, according to an annual study by the Journal of Clinical Psychology. Of the 45 percent of Americans who make resolutions, only 8 percent achieve them by year's end; 29 percent quit by January 15, 36 percent by February 1, and 54 percent bail by mid-year. Though not as prestigious as the academic Journal of Clinical Psychology, the popular site WikiAnswers.com reports that a whopping 80 percent of people have abandoned their resolutions by January 20.

While statistics might be a good barometer of the success-fail ratio, they don't always measure the accompanying emotions behind the numbers: the self-recrimination, frustration, and disappointment of failing to meet our goals. Usually, we just clamp down on those feelings, let the hustle and bustle of life carry us forward, and tell ourselves we will just try harder next year.

Usually, we just clamp down on those feelings, let the hustle and bustle of life carry us forward, and tell ourselves we will just try harder next year.

But what if that doesn't have to be the case?

What if there was still a way to infuse the year with a sense of purpose and direction that we hoped the resolutions were going to give?

And what if all it took was just one little word?

It may seem difficult to think that one word will be the magic bullet that replaces a list of failed resolutions, but Alece Ronzino and the community at OneWord365 are proving otherwise.

In 2009 Alece decided to ditch resolutions and simply choose a word that would shape her year.

It perfectly characterized the financial and emotional leap of faith she was taking by starting OneWord. She had gone through a long season of pain from her husband's infidelity, their divorce, and the loss of their non-profit ministry in South Africa (leadership development and AIDS prevention).

During that dark time, she withdrew socially, emotionally, and even spiritually—keeping her faith in God, but avoiding corporate worship and fellowship. When she tenuously published her first post for OneWord365 she had no idea she was starting a resolution revolution.

Today, the OneWord community has thousands of followers on Facebook, Twitter, and its blog, representing more than 60 countries, and the growth has been exponential: more people have joined this past year than in all the previous years combined.

People choose a word—thrive, organized, intentional, create, focus, to name a few among the hundreds—and join a tribe of others with the same word for encouragement and support.

Focus on who you want to be

Alece strongly believes that this approach is more engaging than a static list of resolutions and often ends up accomplishing those goals anyway. 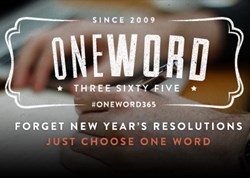 "Resolutions typically focus on what you want to do, while OneWord365 is more about who you want to be. It's about choosing in advance how you will respond to whatever may come your way this year. That type of intentional living and purposeful focus is absolutely life-changing in so many ways," she shares.

For example, lose weight, get fit, and eat better always make the top resolution list, but they are also the first to get discarded. But if a woman chooses a word like healthy, balance, or discipline, she ultimately makes better choices during the year that can lead to her desired goal.

"Lose 25 pounds can sound a whole lot scarier and more difficult than the choice to focus on a word like healthy. The former might be easier to shrug off two months in when no weight has been lost, while the latter can translate to choices being made continually that will lead me to take better care of myself," she says. "It takes the emphasis off of a list and makes it more about making wiser decisions for over all well-being, which is a more sustainable and transformative approach to every area of life."

Alece says choosing a word is like a touchstone someone can revisit to keep track of their journey, but she also understands there needs to be practical ways to keep the word from getting buried like a list of resolutions. That can be done by reading books on a topic related to the word, intentionally striking up conversations about it, journaling, or expressing the word creatively through music or art. For others it can be blogging about it on the OneWord site or connecting with those in their word tribe.

"Resolutions typically focus on what you want to do, while OneWord365 is more about who you want to be...."

Visual reminders are also helpful. Alece's word this year is brave and she wears a "brave" pendant around her neck. Reminders—Post-Its, wall art, and coffee mugs—placed around the home or office are the "nudges" that keep the word front and center during the year.

One of the reasons resolutions fail to stick is because they are typically a solo effort. Joining groups like Weight Watchers or Alcoholics Anonymous will increase the chances of losing weight or quitting drinking, but they require a time commitment that few people are able or willing to make. Yet, community is helpful to keep goals on track. So, while OneWord doesn't focus on resolutions, it does provide a forum for people to connect as they live their lives through the filter of their chosen word.

"We are always more successful in achieving what we set out to do when we have others in our corner who are cheering us on, encouraging us. That's why it is so powerful to say your OneWord365 out loud. Writing about it online and sharing about it with those you trust adds accountability and motivation. I've watched incredible friendships form as people connect with their tribe through social media and blogs," Alece says.

Her hope is that as she lives in self-acceptance that will translate into action: honoring her husband, nurturing her children, and being a good friend.

Cece Harbor describes herself on her blog as a "recovering superwoman." Instead of making a list of how she needed to improve, she chose the word "self-acceptance," an area where many women struggle. Her hope is that as she lives in self-acceptance that will translate into action: honoring her husband, nurturing her children, and being a good friend. Her post resonated with women who commented that they, too, are often their own worst critics.

Naphtali is part of the Fearless Tribe. She shares on her blog she thought one word might be limiting, but she realized she never kept her goals anyway. She couldn't try harder or make more detailed lists. She decided to drop the resolutions, live fearlessly, and trust God. She chose 2 Timothy 1:7 as her touchstone verse, "For God has not given us a spirit of fear and timidity, but of power, love, and self-discipline."

Another unique aspect of OneWord that trumps resolutions is that it isn't tied to the calendar. Alece has heard from people who join OneWord as late as December. They are often blown away by how impactful their one word was even in the final month of the year.

"January 1 is more symbolic than anything else. While it's the start of a new year, it's also just another day. You don't have to wait for some mile marker or some significant day in order to begin . . . . Today is as good a day as any to make a decision about how you want to live your life. It all comes down to the choices we make, and it's never too late to start making more purposeful decisions."

Maria Cowell is a writer living in Los Angeles. Her word for 2014 is Freedom. Follow her @HipMamaMedia, Facebook, or http://www.HipMamaMedia.com. 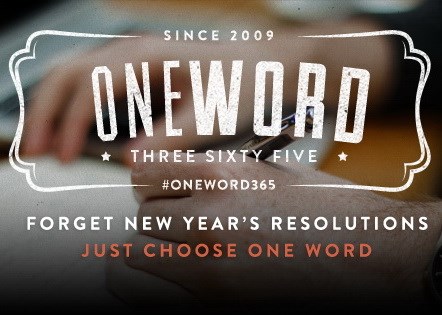