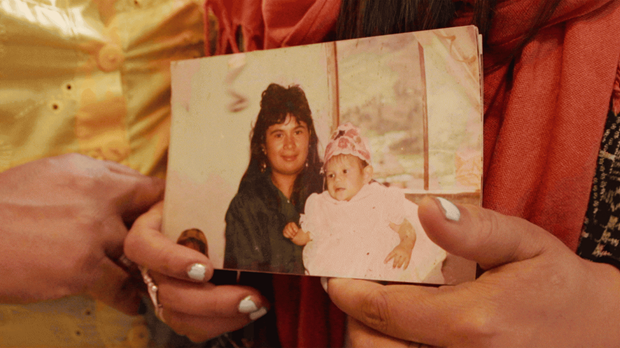 When we talk about adoption, we often talk about parents who want to adopt children. What about the perspective of adopted children? I talked with Lexi Hiland, who was adopted from Colombia and brought to the United States when she was just over one year old, about her experiences growing up in an adoptive family and eventually returning to visit her home country. This trip radically changed her view of family and sparked the idea for a short film, La Lotería de la Vida, that will be released in 2015.

Tell me a little about your story.

I was born in Pamplona, Colombia, on October 18, 1990. I was in foster care for about a year, and then adopted to the U.S. I didn’t know I had been in foster care until a couple of years ago when I went back to Colombia with my adoptive dad. We went back and visited four different cities in Colombia so I could get to know the culture, and I ended up meeting some very important people in my story.

Growing up as an adopted child, what did you know of your story and your history?

I didn’t know a lot about my birth mother. I think any adopted child has these fears and asks questions like, “Why was I given up? Where is my family?” And especially around my age, I struggle with this identity of wondering, “Where’s my home base?” I had a lot of questions, but also an understanding they might not all get answered.

At what point in your childhood or adult life did you feel led to return to Colombia? What were you hoping for out of that first trip?

It was something I had always wanted to do. There was a hope to meet my birth mother, and I wondered what I would do and how I would act. How would this affect my entire life? I was also really hoping to just get to know where I was from and see the Colombian people and get to know who they are.

I think any adopted child has these fears and asks questions like, “Why was I given up? Where is my family?”

Through a random string of events, my dad and I ended up at the agency where I was adopted. We talked to a woman who was trying to help us find information about my birth mother. My adoptive mom and I had gone through some documents right before I left and I had written some names and important dates down on a piece of paper. So when my dad and I went back to Colombia, I pulled out this piece of paper and the woman at the agency recognized one of the names on it. She said: “Hold on, I’ll be right back. I’m going to make a phone call.” When she got back, she said: “I was just on the phone with your foster mother, Maria. She took care of you for about a year and half, and she’ll be here in an hour.” It was a whirlwind of emotions.

You can watch "Para mi Mama," Lexi's video-letter to her birthmother, at LoteriaDeLaVidaFilm.com

What was that moment like when you met Maria?

I was beyond shocked at first because I didn’t even know she existed. It was so surreal, and she was really emotional because it was as if her daughter had finally come home. I kind of felt like a stranger in the room with this other person who was crying and hugging me and kissing me. She had brought pictures of me from my first birthday party, and she brought the first pair of shoes I had ever worn. She kept these memories, and she kept these treasures, which made me feel so incredibly loved but also really strange. I didn’t know her, but she was talking to me like she’d known me my whole life.

What prompted you to then go back to Colombia another time and create this film?

What led me to go back and make the film was the realization that this person I’d met, Maria, had done something truly significant. Something nudged me to let me know there was a story there to tell and share. Maria was just 23 years old when she got a call from the hospital that said, “We have a baby and the mom can’t take her.” She was scared, but she said, “If this is God’s will, and this is what he’ll have me do, then yes, I’ll take care of her.” It’s a really powerful story and I’ve been so happy to be a part of it. Even after filming it, for me the filmmaking process cannot compare with the actual experience of just being with Maria, her family, and these incredibly loving people who welcomed me home so graciously after so long.

I know. It helped me realize family is not just who is your brother, your mother, and your father. These people showed me that family is about how you love people.

How have all these experiences shaped your idea of “family”?

Being in Colombia for that week and staying with my foster family was such a good experience because it was more or less this hodge-podge of people I really didn’t know. I don’t speak Spanish very well, so half the time I couldn’t even communicate properly. We came from very different cultures, and yet I was welcomed by these strangers and this young girl who took care of me. That in itself is kind of a different, messy family dynamic than the traditional American family I know. It helped me realize family is not just who is your brother, your mother, and your father. These people showed me that family is about how you love people.

What have been some of those more painful parts of being adopted, and how have those influenced your faith and shaped your understanding of God’s love?

I think the biggest thing I’ve seen in my life is that because of the separation that happened between me and my birth parents, and then again with Maria, this sense of abandonment is so apparent and can be really hard to handle sometimes. Another painful (yet hopeful) part is not being able to identify with a biological father. That has really affected my faith. I hear in church and in communities that God and Jesus are here for the fatherless, and, for me, that is such a true statement because I feel fatherless in the sense I don’t know anything about my birth dad.

I absolutely love my adoptive dad; he’s been incredible and such a support. He’s been able to show me many good things that I could never learn from my birth father, but there will always be that hole that is constantly trying to be filled and trying to heal from that abandonment. So when I leave friends or move away from places, when relationships get to be hard, or when friendships dissolve—those things hit a raw spot.

At times, it’s almost like a scramble for me to really get back to a place of believing God when he says: “This is who you are, and this is where you’re from. You are my child, and I promise I will not leave you.” I am fatherless as a child, and yet in a way that strengthens my faith to keep pushing me toward my Father who’s not here on earth but is from a higher place. It gives strength, faith, hope, and courage for the road ahead, trusting that there is a parent waiting at the end, waiting to welcome me home.

I am fatherless as a child, and yet in a way that strengthens my faith to keep pushing me toward my Father who’s not here on earth but is from a higher place.

How has growing up with your adoptive family influenced your faith and helped you sense God’s love in positive ways?

It’s always been a message of sacrifice and being honest. My parents could have not told me, but instead they were honest with me about where I was from and they’ve been very open about it. They’ve given a lot to let me know I’m cared for and loved, and that’s really been good to see when I think about how I want to raise my own children someday.

What do you hope viewers will experience or walk away with after watching your upcoming short film?

I hope people can see the beauty of adoption, and how all of our lives are truly and honestly connected, and that cultural barriers and language barriers and fear can wash away in the presence of love. The film has been really fun and challenging to work on, but I hope at the end of it, whatever God wants to say in it can come out through the editing and through the cinematography we captured.

Film can do many things, and I hope that mine will bring people to a place where they can ask themselves the questions I pose in the film. It’s about their experience. What has my story done to move the person watching? I hope anyone who sees the film can experience the impact of loss and love, leaving and coming home. It almost had this prodigal son feel, where after so long I came back and we had this big party, and never once did I feel resentment from the family I met there. Instead of questions like, “Why didn’t you contact us earlier?” it was, “Thank God, our Juliana (which was my name when I was a baby) came home. Call the aunts and cousins and friends and family, and let’s have everyone over here, and let’s eat and laugh!”

Brittany Bergman is a TCW regular contributor as well as an assistant copyeditor at Tyndale House Publishers. You can connect with her on Twitter at @BrittanyBergs or read more at her blog TheNestedNomad.com.

Brittany Bergman is TCW regular contributor as well as an assistant copyeditor at Tyndale House Publishers. You can connect with her on Twitter at @NestedNomad or read more at her blog TheNestedNomad.com.