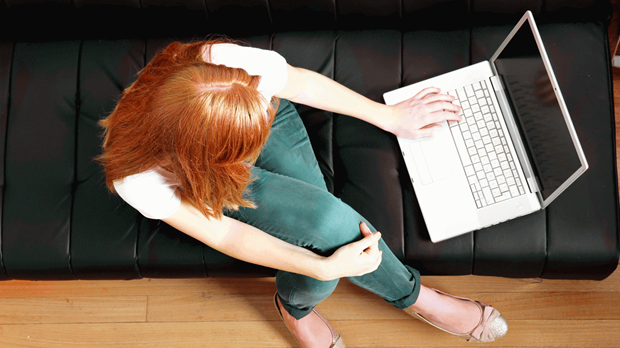 I didn’t realize it was already eight o’clock when my younger son asked, “When are we going to eat?”

Irritated, I responded: “Shut up! Can’t you see I’m on the computer?”

I thought it had just been 20 minutes, but when I glanced at the clock, I discovered I’d been online for more than five hours. No wonder he was hungry! The tone in which I’d answered him mortified me. I apologized, signed out of the chatroom, and started dinner.

My response to my son’s innocent question should have clued me in: I was spending way too much time on the Internet. Until that moment, I hadn’t realized how much my visits to the chatroom were getting in the way of our family life. But even though that incident really bothered me, I still didn’t stop.

My introduction to Internet use began when I was trying to find an appropriate chatroom for my older son. Intrigued, I sat in front of the computer one evening and asked him to show me how to chat. And guess what? It was fun! Within days, this chatroom became my favorite “place” to be.

My entire focus was on the power and control I felt by capturing a man's sexual attention. I didn't understand that, in reality, I was just giving my power away.

While I began spending every spare minute on the Internet, my family began eating more boxed and frozen meals than homemade ones. My husband even started doing the laundry—a household task I normally enjoyed. Nevertheless, I became so enthralled with the Internet that I reached a point at which I couldn’t be bothered with everyday chores. The people I interacted with online became my new best friends—none of my other relationships seemed as important to me as my new online pals. I neglected my main responsibilities and my core relationships and chose to have fun online instead.

From Chatting . . . to Cybersex

After six months online, I met a man whose attention and sweet words were like food in a famine. In my troubled marriage, I often felt starved for love and was running on empty emotionally; going online and interacting with this new “friend” temporarily filled the void. I couldn’t get enough of our conversations. From that point, it was only a short step to cybersex.

When I ventured into the world of cybersex, my level of addiction heightened. I cared about little else—my entire focus was on the power and control I felt by capturing a man’s sexual attention. I didn’t understand that, in reality, I was just giving my power away.

My involvement in cybersex grew beyond just one “friend” to several. I habitually stayed online all night talking to men. When I heard the coffeemaker turn on at 5:30 a.m., I’d slip back into bed, sleep for an hour, and then get up, exhausted, to start another day.

I was so addicted to the Internet that my life was completely falling apart. I’d go days without taking a shower and live on junk food or no food at all. Though I gave attention to my sons’ most pressing needs, my husband shouldered most of the responsibilities of family life, taking over meal preparation, bath time, and bedtime. After four months of this madness, my husband finally confronted me one day when we were in our backyard. 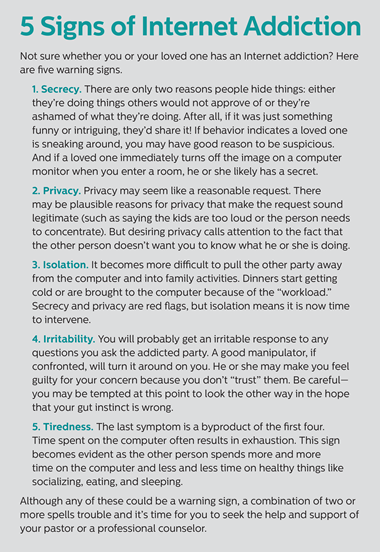 “Have you ever had cybersex?”

“Yes,” I answered. “But I was just fooling around. It didn’t last more than two weeks.”

He stormed into the house and came back out with pages of logs he’d printed off his computer. He waved them in my face. “I have more, too!”

With a pained expression, he read off the names of several men.

I winced. Thinking I’d covered my tracks, I asked: “How’d you get those? I deleted all my conversations.”

“You can’t delete it off the hard drive. I went online and found out how to hack into my own computer. I read your emails too. You’re through using my computer to talk to other men. I’m cutting you off.”

“No,” I yelled. “You can’t! I have to get online. At least let me say goodbye to my friends,” I pleaded. I couldn’t imagine living life without going online.

At church the next day I opened up to a friend and told her what was really going on. “Girl, you’d better get down on your knees and kiss that man’s feet,” she said. “He probably saved your life!”

I stared at her in surprise.

She then told me she’d been very concerned about me and had been praying for me regularly. She felt I’d been inching toward a point of no return.

As I stood there with my mouth hanging open, she added, “Now, you go thank your husband!”

Her words humbled me. “I will,” I promised.

After church, I told my husband what she said. He stood there with a big know-it-all grin. Looking him in the eyes, I said, “Thank you for saving my life.”

That Sunday I quit cold turkey and caring for my family became my first priority again. After a year passed, though I successfully stayed off the computer, our troubled marriage continued to deteriorate. In an ironic twist, my husband reconnected with an old flame on the Internet and chose to leave our family.

Once again, I found myself sitting at an all-you-can-eat buffet of sin and devouring it. Lust held me captive again.

Without my husband around—and with plenty of fresh heartache—the computer began to tempt me again. Each time I passed the monitor, I felt it beckoning me to revisit old haunts and “friends.” I managed to resist the temptation for two weeks. But one night, after putting the kids to bed, I decided to go online. Millions of people do it all the time, I thought, so why can’t I?

Immediately I felt the old rush as I made myself “available” to new online acquaintances. Once again, I found myself sitting at an all-you-can-eat buffet of sin and devouring it. Lust held me captive again.

But then one morning I looked at the computer and felt absolutely disgusted at my behavior just hours earlier. I remembered the freedom I’d felt when I’d steered clear of Internet use and I determined to break free again. “No more!” I cried. “It’s not going to control me again!”

My children and I moved to a computer-free apartment. To get offline and stay offline I spent a year in therapy, another year in a women’s codependency group, and I joined two 12-step groups. Now, truly free, God is using me to help others who are facing a similar temptation. I cling to the promise that God can heal and restore what was lost and destroyed in my life during my period of addiction (see Joel 2:25).

Internet addiction often happens to people with deep emotional wounds that have never been addressed. Wasting time on the computer is a way hurting people can temporarily forget about their pain. Often, wounded people don’t realize the dangerous lure of sin lurking right around the corner, just a click away (see 1 Peter 5:8).

If you feel the lure of Internet temptation, don’t let yourself be a target for the Enemy! Make boundaries for your Internet use and keep your spiritual eyes open! Jesus’ admonition to be as shrewd as snakes and innocent as doves is the best way to protect yourself and your loved ones (Matthew 10:16). And remember, “the Spirit who lives in you is greater than the spirit who lives in the world” (1 John 4:4). There is help available and true hope in Jesus.

Faith Richards is a pseudonym for a writer and teacher living in Georgia. She is the author of Rescued from the NET. 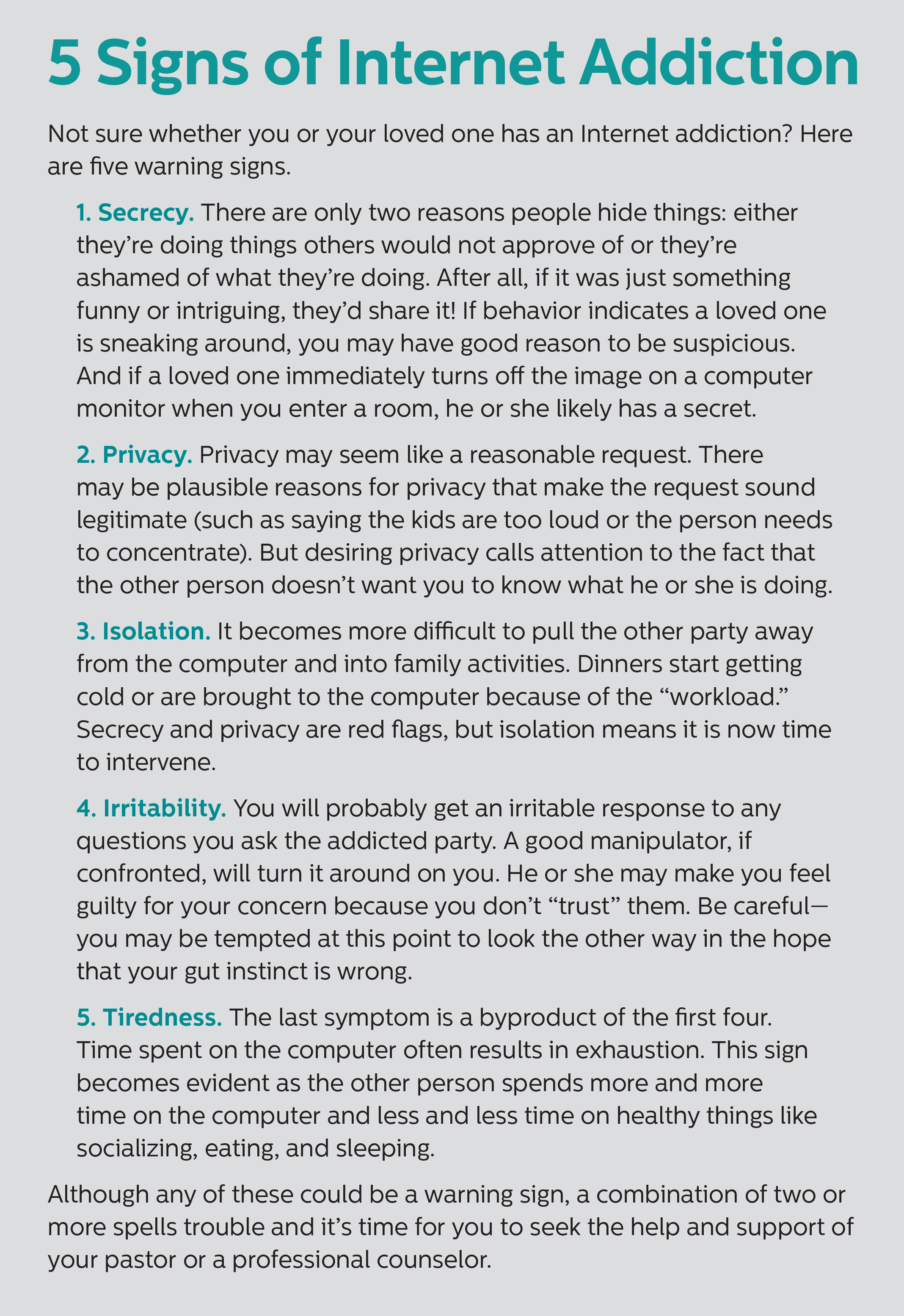