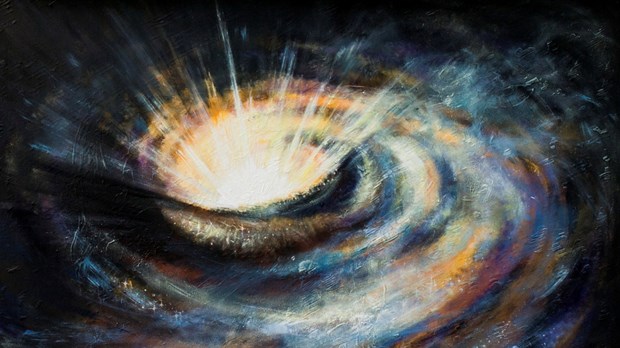 Several years ago I had a crisis of faith. It all began with a Science Channel television program on supermassive black holes, of all things. Basically the premise was that scientists have discovered giant black holes (like the size of an entire solar system) in the center of every galaxy, and each plays an important role in the creation and sustainability of its particular galaxy.

The scientists described the extreme order of these black holes in the whole universal space-time continuum and how it’s forced them to rethink physics. The narrator, summing up several scientists, said, “If, as it now seems, every single galaxy has a black hole at its heart, this can’t be a coincidence.”

You got that right, I thought. It’s called—we’ve got a supermassive, supergenius Creator at work in the universe.

My finite brain couldn’t handle the size and power and strength of my Creator.

Then the screen exploded with all these multi-colored, multi-shaped, multi-gaseous galaxies. And my brain, for an instant, exploded with how awesomely vast and mammoth our God is. My finite brain couldn’t handle the size and power and strength of my Creator.

And in that instant, I felt thrust into my own black hole that was very dark and desperate.

Wait. How can this God possibly know anything about me? I thought dumbfounded. There’s no personal relationship with him. Come on. He’s busy creating galaxies. How presumptuous of us humans to believe God sent his Son to die for us—we’re much too insignificant in the whole of the universe.

I thought Thomas Jefferson must have been correct in his religious convictions. He believed that God was like a watchmaker: he wound up the universe (or in our case, the earth and life on it), and then let it run its course without his interference while he was off creating other worlds.

I never stopped believing in God; I just began to think that God was so giant that he would never be personally involved in my insignificant, irrelevant life.

I began to walk around in a daze, spending my days at work writing about God, but not sure he was who I was claiming him to be. It became so overwhelming that finally I began (daily and purposefully) to sit quietly with God, just focusing on him. Ironically it was in my crisis of faith that I discovered the spiritual discipline of contemplation.

Who are you, God?

Every day I sat with my hands open, looking up to the heavens, and asking God to show up—if he was, in fact, who I’d always believed him to be. And the longer I sat, clearing my mind of the doubts and arguments, the more I realized he was showing up. Over the course of several months, I continued awakening to God’s presence and he began to press upon my mind irrefutable truths. He reminded me that although he created supermassive black holes, he also created amoeba. And male parasitic wasps, which measure only 139 micrometers in length. He created microbiology with all its clear and direct order.

He’s not my buddy who may or may not be able to handle the problems in my life or the country or the world. He’s Creator God who made everything from nothing.

Through contemplation God made me realize that if he cared enough to create such order with the most microscopic things, then isn’t it possible that he does have a personal interest in me? That maybe Jesus’ words were true: “Are not five sparrows sold for two pennies? Yet not one of them is forgotten by God. Indeed, the very hairs of your head are all numbered. Don’t be afraid; you are worth more than many sparrows” (Luke 12:6–7).

When I begin to worry about life’s circumstances—the economy, job security, finances, family, health—I go back to contemplation. I think about supermassive black holes and return to how great is our God. Contemplation helps me view God with the right perspective. He’s not my buddy who may or may not be able to handle the problems in my life or the country or the world. He’s Creator God who made everything from nothing. Who raises people from the dead. Who opens wombs. Who gives sight to the blind. Who pushed up the mountains and shoved down the depths of the seas. Who organizes and orders the massive, incomprehensible universe—from the microscopic to the outer edges of all existence. And who gave his only Son for me because he loves me.

When I practice contemplation, I ask God:

“When I consider your heavens,

the work of your fingers,

the moon and the stars,

which you have set in place,

what is man that you are mindful of him,

Who are you that you fear mortal men,

the sons of men, who are but grass,

that you forget the Lord your Maker,

who stretched out the heavens

and laid the foundations of the earth,

that you live in constant terror every day

because of the wrath of the oppressor,

For I am the Lord your God,

who churns up the sea so that its waves roar—

the Lord Almighty is his name.

I have put my words in your mouth

and covered you with the shadow of my hand—

I who set the heavens in place,

who laid the foundations of the earth,

These days, when I watch the Science Channel, my mind still explodes with how awesomely vast and mammoth and ordered and creative our God is. My finite brain still can’t process the size and power and strength of my Creator. But now, I open my hands toward heaven, sit quietly, and with abandon invite our great God to abide with me, to awaken me to his work in my life and the world around me, and to remind me that absolutely nothing is impossible for him to accomplish in and through insignificant, irrelevant, loved me.

Ginger Kolbaba is the author of Desperate Pastors' Wives and The Old Fashioned Way. Connect with her on Twitter at @gingerkolbaba.