What to do when your spouse is your bully
Dr. Juli Slattery 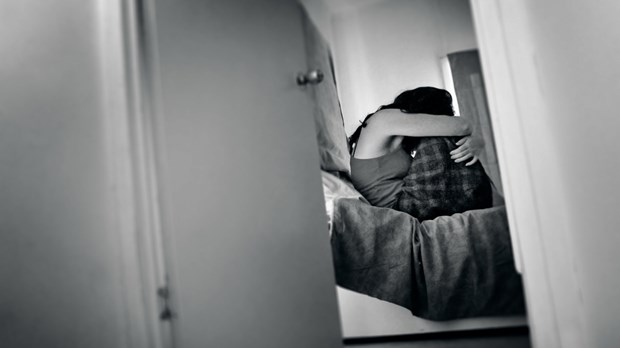 We expect bullying to show up in schools, in neighborhoods and even in the workplace, but no one thinks of it occurring in marriage. Perhaps this is because phrases like "domestic violence" and "emotional abuse" seem more fitting when one spouse bullies another. While these are obvious forms of bullying, subtler methods might exist in a marriage unrecognized and even wrongly justified. Here are a few examples.

Sarah stood at a fish counter breaking out in a cold sweat. Her husband, Scott, was having important company for dinner and had specifically asked her to make Chilean Sea Bass. She arrived at the grocery store to find them fresh out of sea bass. Instead of choosing another dish to create, Sarah panicked. She knew that Scott would be irate if she didn't make what he had requested. He wouldn't yell or scream, but he would make her "pay" with cold remarks and sarcastic comments.

Debbie felt constant pressure to please her husband, Rick. Whenever he demanded sex, she felt obligated to give it—even at 3 A.M. If she were tired or not feeling ready, Rick reminded her of her "wifely duty." Sex, like many things in their marriage, lacked tenderness and sweetness. Rick skillfully leveraged Debbie's desire to be a godly wife by citing Bible verses about submission and the apparent subservient role of women.

Are Scott and Rick bullies? Not all people who bully in marriage even know that they are doing so. Some grew up in chaotic environments in which structure and order were the primary way of survival. Those coping strategies don't disappear in marriage. Fears and triggers from the past create a deep desire to control at all costs. Others were raised in homes in which conflict was frequent and loud. They learned that resolving conflict means yelling and demanding.

Intentionally or not, a bully uses intimidation and coercion to get his or her way. Yes, women can be bullies too. A wife can skillfully use emotional coercion like humiliation and cynicism to "punish" a husband who isn't "behaving" according to her desires. I've met powerful, competent men who panic at the thought of crossing their wives.

Is This Normal Conflict or Bullying?

What happens in the privacy of your own marriage is difficult to gauge on the scale of normal. All couples have conflict. Most spouses lose their temper or use subversive tactics like manipulation when the relationship is strained. Probably all of us would admit to making sarcastic statements that are just plain mean. So what's the difference between the typical "dysfunction" in the average marriage versus bullying?

Bullying represents a pattern in a relationship. There is an intimidator and a victim. I can remember times when my husband and I have bullied each other over our 20 years of marriage. Mike tends to react in anger toward me, and I "bully" him by pulling out overbearing intellectual arguments that make him feel inferior. Although we have had episodes of trying to intimidate each other, this is not the pattern of our relationship.

If you feel tense when you hear your husband's car pull in the garage or you obsess about disappointing him, these may be red flags. Also, pay attention to how people close to you perceive your marriage. Do they make comments indicating that your husband doesn't treat you well or they are concerned about your relationship?

Someone once said, "All progress begins by telling the truth." A pattern of bullying continues in marriage because the truth is too inconvenient to admit. As uncomfortable as it is to live with an intimidating spouse, it's less threatening than what might happen if you address the problem. Over the years, most of us adapt to an emotional "dance" in marriage that may not be healthy, but it's all we know.

It takes great courage to change that dance and to honestly admit, "The way we interact is destructive." It takes even more courage to be honest about your own role in the destruction. If you are the bully, be truthful about it. Stop pretending that your controlling spirit is "just your personality."

Because bullying and the fear surrounding it become so entrenched over time, you will probably need the help of a mentor or counselor to effectively address the issue. This is particularly true if your spouse may be a danger to himself, to you or your children, and/or if substance abuse is involved.

Fortunately, there are several great resources that help give clarity in the midst of confronting dysfunctional patterns. My top recommendations include Love Must Be Tough by James Dobson and Boundaries by Henry Cloud and John Townsend.

An Issue of "Spiritual Bullies"

Perhaps the most confusing situation in marriage is when one spouse bullies another using religious or spiritual arguments. Throughout generations, people have misapplied biblical teaching to justify evils like slavery, prejudice, witch trials, selling indulgences, and even the Crusades. In millions of homes around the world, religious teaching is used as a form of coercion, deprecation, and abuse. While taking one or two verses out of context may seem to justify such behavior, the whole of Scripture clearly condemns it.

Jesus said that all of the teaching of the Law and the Prophets are summed up by these two commandments, "'And you must love the LORD your God with all of your heart, all your soul, all your mind, and all your strength.' The second is equally important: 'Love your neighbor as yourself.' No other commandment is greater than these" (Mark 12:30–31).

There is nothing about bullying or coercion that represents the love of God. We do ourselves no favors when we allow any form of bullying to exist within the body of Christ, particularly within the intimacy of marriage.