How can we prevent bullying?
By Kelli B. Trujillo 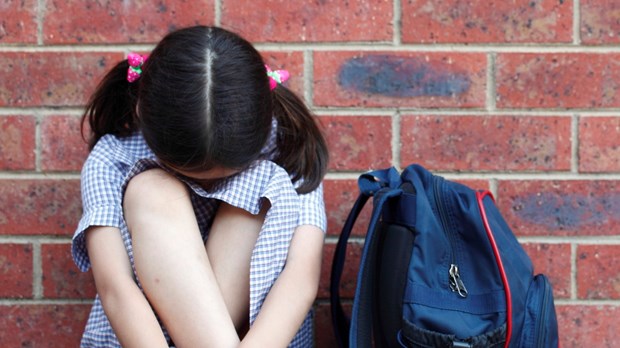 Angry and frustrated, my friend Angie* told me what had happened that morning at the bus stop. It was her middle-school daughter Brit’s* first day back at school. As she gathered with three other middle-school neighbor girls, they huddled up for a photo. Just the three of them. Brit, in front of the other parents, was quite intentionally left out. She had to stand there awkwardly and alone while the others linked arms to smile for the camera.

But what makes this story even worse is who did the leaving out.

It wasn’t actually the young teenage girls—it was one of the mothers.

Loud enough for everyone present to hear, she’d called together the three girls to snap a first-day-back-to-school picture, leaving Brit—the only other remaining child at the bus stop—to stand all alone, just a few feet away.

It was a blatant and mean-spirited act, leaving all the other parents a bit startled.

I was aghast at my friend Angie’s story. How could a grown adult purposefully traumatize a 13-year-old girl like that? And on the first day of school? But it turns out that this slight was just another in a series of pointed acts of exclusion from the other mom. I was surprised—but probably shouldn’t have been—to learn that my friend and her daughters have found themselves the target of such adolescent-type bullying behavior, all at the hands of a grown-up.

How could a grown adult purposefully traumatize a 13-year-old girl like that?

You’d think we’d have outgrown it by now—we aren’t in middle school any more, after all—but in our culture it seems that bullies are everywhere. Yes, there are still the proverbial bullies on the school bus or the playground, tormenting other kids. But there are also grown-up bullies: coworkers who bully through manipulative gossip and never-ending vendettas, spouses who control with cruel words or physical abuse, bosses sexually harassing and intimidating employees, and even parents who use the Internet to cyberbully their kids’ classmates. From the headlines about the domestic abuse perpetuated by the NFL’s Ray Rice (whose caught-on-video violence left his fiancée unconscious) to the misdemeanor conviction of Lori Drew (a Missouri woman whose online cruelty toward a 13-year-old contributed to her suicide), bullying continues to weave throughout our cultural conversation.

How can we prevent bullying? What causes such callous behavior? What’s the proper Christian response? In this issue of Today’s Christian Woman, we go behind the headlines to look more closely at personal stories of bullying, victimization, and hope.

While cruelty and intimidation have been around since the dawn of time (consider biblical bullies like or Joseph’s ), modern-day cyberbullying can take such torment to an entirely new level. The easy access to others’ lives via the Internet and the guise of anonymity that grants a sense of liberty to say things one would never say in person combine to create a devastating—and even, at times, deadly—cocktail of cruelty. Brittany Bergman’s “Beyond ‘Traditional’ Bullying” explores this phenomenon, providing insights on how to respond to the cyberbullying culture, and how to protect yourself and your loved ones.

While it’s easy to blame the bully, the truth is that bullies often hurt or intimidate others because of their own inner woundedness.

In “I Was Bullied As a Child,” Vaneetha Rendall describes her own experience of being bullied as a polio-stricken child. Though she kept her bullying a secret and maintained an outward strength and determination, Vaneetha still carried emotional scars from the cruel messages repeated to her throughout her youth. In this article, she explores the importance of dealing with such wounds rather than ignoring them—and the hope we can find in Christ to experience meaningful healing.

While it’s easy to blame the bully, the truth is that bullies often hurt or intimidate others because of their own inner woundedness. In Mary Goodrich’s “Confessions of a Middle-School Bully,” Mary opens up about the hurt and torment in her own life that led her to form a tough exterior and, eventually, to begin a pattern of hurting and tormenting others. Her courageous honesty gives us insight into how we can help and intervene in the life of a bully, also pointing her (or him) to the hope and healing of Christ.

And before you finish reading through these pages and contemplating the bullies “out there,” Dr. Juli Slattery challenges you to look closely at your own marriage. In a candid exploration of the way husbands and wives may bully (intimidate, manipulate, use unkindness) in marriage, Juli encourages us to confront dysfunctional patterns and to choose the humble character of Jesus over the “power” such bullying behaviors may seem to grant us.

I’m proud of my friend Angie and her response to her bullying neighbor. It’s a tough matter to navigate and it’s not always clear how best to respond to another’s cruelty. But what I see in Angie—as she’s still weighing how to respond—is a commitment to seek the guidance of the Spirit and embody the love of Christ, even if that means doing so in the context of difficult conversations.

What about you? How has bullying touched your life? Has it hurt you, your child, or a loved one? Or have you bullied others in your past as an expression of your own inner turmoil? Might you be using bullying behaviors to get your way even now, without realizing it? Our hope is that this issue of TCW opens up the conversation for you and your loved ones of how to shine Christ’s light, love, and strength into relationships fraught with fear, hatred, and hurt.