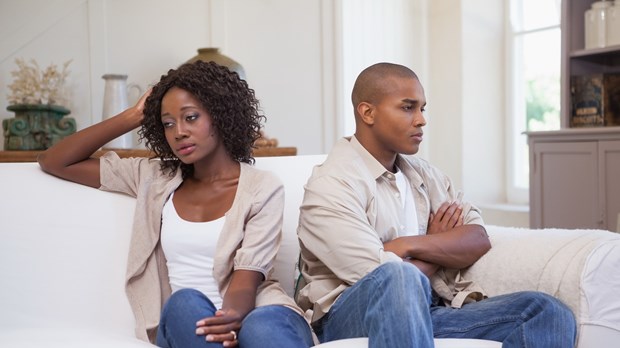 "I don’t love you anymore.”

Those were the most painful words I had ever heard. My husband spoke them on a cold, rainy day in February. The day before Valentine’s Day. A day that is forever etched in my mind.

There had been a growing distance between us that I was hoping was just temporary. Two weeks later he moved to another state.

But as all the details became apparent, I felt increasingly hopeless. I spent days crying in bed, pulling the covers over my head so no one would hear. I pleaded with God to turn the situation around, to bring my husband back, to put our family back together. But after several months of mourning, I finally had to embrace my new “normal.”

This new normal brought so many losses: My children would not be raised in an intact family. My teaching ministry would look different as a separated, and then later, as a divorced woman. My social circle would be reoriented.

My biggest fear was that my divorce would define my life.

My biggest fear was that my divorce would define my life. Many women I knew whose husbands had left were angry and bitter, their pain etched on their faces. Years later, they were still eager to recount the sins committed against them.

I saw that I, too, was becoming so preoccupied with my husband’s sin that it consumed my thoughts. I thought about it constantly—standing in line at the grocery store, waiting at the doctor’s office, and even before falling asleep every night. I didn’t like the person I was becoming because all I could dwell on was the negative. Paul exhorts us to dwell on whatever is good and lovely, pure and honorable, and I was dwelling on quite the opposite . . . but I felt powerless to change. I threw myself on the bed and sobbed, “Lord, I don’t want to be bitter, but I don’t know how to stop this. Please, please help me.”

Every day, I begged God not to let me grow bitter. To help me focus on the lovely. To stop being so self-absorbed.

More than bringing my husband back, I wanted God to use this trial in my life for good. I wanted to be more like Jesus as a result of it, not more resentful and angry. But I knew that I couldn’t do that myself—it had to be the work of the Spirit.

Immediately God revealed that I was not to rehearse the sins committed against me—not to my children, not to my friends, not even to myself. The things that were said and done needed to be put to rest. I didn’t need to dwell on them because that only led to more sin.

This was challenging because dwelling on the sins my husband had committed against me had become a source of perverse pleasure. I enjoyed thinking about the way I had been wronged. I found twisted enjoyment in replaying the offense, getting angry, and being the victim. But that pleasure was really poison—poison that I was pouring into an already painful wound.

Every time I was tempted to mentally repeat painful memories, I asked God to redirect my thoughts. At first it was multiple times an hour, but over time it became easier, less frequent. I was happier when I didn’t dwell on the negative. I saw the wisdom in Paul’s words to the Philippians.

Called to Do the Seemingly Impossible

I was working on taking my thoughts captive when I sensed God calling me to forgive. I knew this was a higher level of commitment, and honestly, I recoiled at the thought. I didn’t feel ready. I hadn’t healed yet. I didn’t want to forgive. Forgiveness meant giving up the right to hold what my husband did against him, and I wanted to retain that right. But as I read the Bible, the topic of forgiveness kept coming up, with stern warnings such as, “But if you refuse to forgive others, your Father will not forgive your sins” (Matthew 6:15).

More than bringing my husband back, I wanted God to use this trial in my life for good.

My only comfort was that if God truly called me to forgive, he would enable me to do it. I acknowledged that I had no intrinsic desire to forgive and was actually incapable of it on my own. I trusted that God would supply both the desire and the ability.

After much prayer, I felt that I needed to fully understand what I was being asked to forgive before I could authentically do it. I went away for a weekend to a retreat center to process everything that had happened. I began by journaling all of the things I needed to forgive, all of the offenses that were committed against me, all of the things that would never be the same again. I sobbed as I wrote, wondering how I could ever forgive this long list.

At the same time, I knew I couldn’t wait until I felt like forgiving because then I’d never do it. Forgiveness is an act of the will and not an emotion. I knew it was a decision and not a feeling, but that didn’t make it any easier.

For me, at first, forgiveness felt like death. If Christ wasn’t enabling me to do it, I never could have even attempted it. I kept going back to him, asking him to do it for me.

One of the hardest things about forgiveness was that it felt totally unfair. It seemed as if I was condoning what happened, or at least agreeing it wasn’t that bad. Even more, I felt that my forgiveness implied that I had fully healed and the situation didn’t hurt anymore. Since none of that was accurate, I wondered if I really could forgive.

Forgiveness is an act of the will and not an emotion.

But as I sat in the small retreat chapel, God revealed to me that forgiveness was not saying that my husband’s actions were okay. When I looked at the gospel, God did not forgive only our minor sins. Our sins were massive, and we could never make up for them. The act of forgiveness is not about trivializing or overlooking sin; it actually involves acknowledging its magnitude.

I learned that when I forgive someone, I release them to the Lord. God is the only just and perfect judge, and he will judge wisely. In Romans 12:19, Paul says, “Dear friends, never take revenge. Leave that to the righteous anger of God. For the Scriptures say, ‘I will take revenge; I will pay them back,’ says the Lord.” Knowing that the outcome is in God’s hands made it easier to forgive my husband and let it go.

At the end of the weekend, I wrote out a prayer of forgiveness. I felt tremendous freedom and joy that I hoped would last forever.

But it didn’t. As soon as I got home, I was accused of being argumentative in a situation where I was trying to be a peacemaker. I was left feeling frustrated and bewildered, wondering what to do. It felt like Satan was trying to attack my decision.

But as I went back to the Lord, I saw that forgiveness was a process that began with a decision. It was not a “once and done” event, but rather an ongoing choice. As new offenses came up and memories resurfaced, I needed to keep forgiving. Each time I was reminded of the sin against me, I had a choice: I could choose to rehearse it, strengthening its power over me, or I could choose to release it, weakening its power. It required tremendous work, vigilance, and constant prayer. But each time I chose to release my feelings, it became easier.

Lastly, I asked for forgiveness for the ways I had wronged my husband. This was hard to do because I felt most of the blame lay with him. As I reflected on my assumption, I realized that in my conflicts, I almost always think someone else is to blame. God showed me that I needed to own my part, and I sent my husband an email asking for forgiveness. After sending that email, I was flooded with tremendous peace.

As I extended grace, I felt God’s grace and love flow through me.

While I forgave my husband because God called me to and not because I thought it was good for me, the impact of forgiveness in my life was incredible. It was one of the most important steps in my healing. As I extended grace, I felt God’s grace and love flow through me. God released me from bitterness, which brought exquisite freedom.

But even more than that, forgiveness radically transformed my walk with God. Forgiving my husband was the most life-changing, life-giving, God-glorifying thing I have ever done. It drew me closer to God than I ever would have imagined. It transformed my perspective, deepened my prayer life, and gave me inexplicable joy.

Not surprisingly, though forgiveness began as my gift to God, it has become God’s gift to me.