I couldn't understand why so many young women in the church weren't attending women's ministry events. Then I started asking questions.
Sherry Surratt 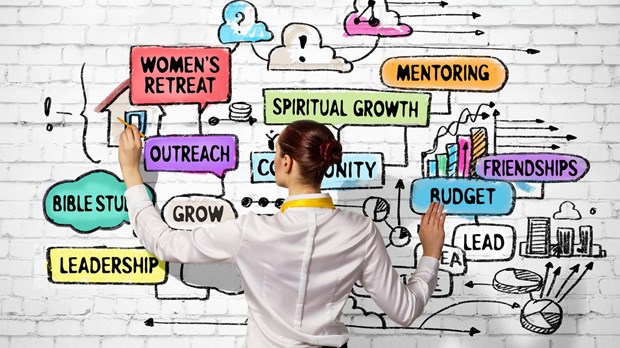 As a small child I remember tagging along with my mom to women's ministry meetings to spend the morning in the church basement making quilts and knitting baby items for missionaries across the world. When this work was done, the women of mixed ages would gather around the table enjoying warm pieces of apple cake as they packed the items, sealing each box with brown packing tape and prayer. Sister Ella, the women's ministry leader, would paint a picture with her words, asking God to bless and protect the families, using the items to bring a bit of joy and helping them extend their reach. Sister Ella wasn't an eloquent prayer leader, but her simple words and heartfelt tears made an impression on my young heart. I wasn't even sure what a missionary was, but I knew they must be doing something important and that they were loved.

Women's ministry has come a long way. Such a long way, that I wonder if we've turned 180 degrees and are now facing the opposite direction.

Women's ministry has come a long way. Such a long way, that I wonder if we've turned 180 degrees and are now facing the opposite direction. For many women's ministries, what started out as a gathering of women finding practical ways to help others has turned into elaborate retreats and Bible studies focusing on helping the women in the room.

Are Bible studies bad? Certainly not.

Are retreats a waste of time? No way.

But why then are so many younger women choosing not to get involved in the women's ministry at their church?

I've spent some time asking Millennial women this exact question, and they've shared honestly. A young mom with two kids and a full-time job candidly told me, "I don't have a lot of extra time to spend away from my work or family, and when I do, I don't want to go to another tea or meeting that focuses on me. I want to use my time to make a difference."

The conversation made me think of all the times I had planned events focusing on what I thought might bring women to an event and arranging the details around what I thought would help them grow. I didn't realize that she might want to invest her time beyond our church walls to touch someone else's heart and life. It made me feel as if I had somehow missed the point of what women's ministry really is all about, and it made me begin to ask some questions: What if we thought about a paradigm shift in women's ministry that moved our thinking from what our women need, to what God is calling them to do? What could our women's ministries look like if our focus wasn't on developing the women inside the church but releasing them to come alongside the ones outside, helping another woman take her next step toward Christ, even if it's a step no further than she is herself?

Several years ago, I had the opportunity to lead a learning cohort at Leadership Network where I spent a year with nine women's ministry leaders from large churches around the country. We researched what women were saying about what engaged them in ministry and also what didn't. We studied women's ministries that were flourishing and engaging younger women and we compiled the results into three paradigm shifts.

From inside to out

The women finish one Bible study, only to sign up for the next one. Was there any life change?

Many women's ministries invest a lot of time connecting the women that already attend the church, giving them opportunities to meet each other and spend time together in Bible studies or spiritual growth classes. These are good things. But have you ever had moments as the women's ministry leader when you wondered what was being accomplished? The women finish one Bible study, only to sign up for the next one. Was there any life change?

This is the question one growing church asked about their women's ministry gatherings, and they decided to try something new. On Thursday mornings when their women normally gathered inside the church for a study, they decided to go out. They gathered in the parking lot and headed to a nearby apartment complex that housed many single moms. They decided to focus on two things: friendship and story. They used their friendship skills, spending time in the complex, engaging the moms in conversation and asking how they could help. They found the moms' biggest need was babysitting, so they organized free babysitting nights and expanded into after-school tutoring. They also spent a few Thursday mornings learning how to share their stories and how to invite a mom who might be coming from a different background to share hers. While some of the moms did start attending the church, this wasn't their goal. They felt that God had called them to love, no strings attached.

The women's ministry leader shared that after many months of loving on these moms, their women's ministry exploded with not only more women becoming involved but also other great ideas of how they could use their simple skills of friendship and story to make a difference.

From big to small

It's fun to plan an event that draws a crowd. But as a women's ministry leader, I sometimes wondered what was accomplished, other than a lot of hard work.

It's fun to plan an event that draws a crowd. But as a women's ministry leader, I sometimes wondered what was accomplished, other than a lot of hard work. I knew many women were lonely and wanted a way to make friends. A large retreat or women's conference was a time of learning and fun, but didn't satisfy the need for deeper connections. In our leader cohort, several of our churches mentioned the same dilemma. Big events sometimes even worked the opposite of connection. They entertained and built excitement but were intimidating to the woman who didn't have close friends and didn't want to come alone. If she did bravely venture out, it was often too busy and chaotic of an environment to support the intimate conversation that sparked a friendship.

A church in California decided to attack this by shifting their focus from big events to small intimate gatherings. They started by equipping their women to organically start book discussions in the coffee shops located in book stores. The women spread out in different locations, alone or with a partner, and then strategically started conversations with women who looked like they could use a friend. The goal wasn't to build a large group but to keep it small with three to five women, giving opportunity for friendships to blossom and let women talk about the things on their hearts. The conversations often led to opportunities to talk about God and what he had done in their lives. When I asked the leader how this had impacted their women's ministry, she said no one really talked about the big annual retreat they used to do, because they were getting so many opportunities to share Christ in ways they had never dreamed possible and were forming deeper relationships than they had ever before. She said she now believed in the power of small and how it could transform lives and hearts.

From program to organic

Isn't it frustrating to plan a Wednesday morning program of events and then hardly any women show up? This was echoed over and over again by the churches in the cohort. They had asked their women what classes and studies they wanted, but when they were offered, the attendance was dismal. Why? When I asked this question, women's ministry leaders from a church of a booming suburban area spoke up. They said their younger women had told them that the classes and events that the church offered seemed irrelevant to what they saw going on in their communities. One young woman said, "Instead of asking us what we want the church to do for us, how about if they asked us what we want to do for the world?"

This is exactly what one woman in Arkansas answered for herself. She read a newspaper article about women in prison, who, upon their release into a halfway house, didn't have any appropriate clothing suitable for a job interview. As she prayed, she felt God impressing the words, Sew clothes for prisoners, on her heart. She said it didn't make any sense until she thought about the fact that she could sew clothes and there were needy women in the next town over who needed them but couldn't afford them. She waded through the red tape of connecting with these women and dove into a ministry that transformed her life, bringing her circle of close friends with her. Her women's ministry leader said this was eye-opening to her when she realized that women have God-given talents that are the exact match to the needs in the community, but weren't necessarily a match to the things they offered in their women's ministry. What could happen if we asked this question: Instead of forming the opportunities for our women, what if we let God build the opportunities through their passions and let this be the foundation of our ministry?

The younger women in your church may say they have no time to attend your event, but look closely—are they investing their time and talent freely to a community charity that speaks more to the passion of their hearts? If this is true, how could this impact your women's ministry programming?

From the cohort, I walked away with a new perspective as a women's leader, and I asked myself some questions: Instead of pouring in, how was I giving the opportunity for the women in my group to pour into others? Had our group become ingrown, only focusing on ourselves? Did I, as the leader, have an external, outside-my-church perspective for lost people that I could share with the women in my ministry, or was I more focused on building a big women's ministry?

How about you? What questions could God be laying on your heart?

Sherry Surratt is the CEO and President of MOPS International, and a featured contributor for Today's Christian Woman. She and her pastor husband, Geoff Surratt, reside in Colorado, and are parents of two adult children, Mike and Brittainy, and the proud grandparents of Maggie Claire and Mollie Rose. Connect with Sherry on Twitter @SherrySurratt.