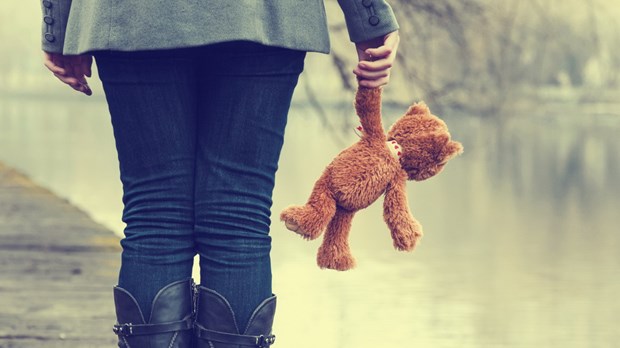 Her name was Lily Anne. I discovered that I was pregnant with her on a Saturday night, and from the moment I knew she existed, I knew I was her mother and I loved her.

On a Wednesday morning in the spring, my midwife looked at me and said, “I can’t find a heartbeat.” She was gone.

I spent every minute of the next 30 staring at that ultrasound screen, studying her shape and knowing this was as close as I was ever going to get to seeing her face. Tiny arms folded across her belly, the curve of her head, legs tucked up high, each delicate feature burned into my brain with perfect accuracy while the rest of the room faded into hazy motion.

It’s a quiet world of mourning, full of parents and grandparents and siblings walking amongst us, pushing forward.

The doctor came in to confirm her passing, and the midwife offered her condolences while explaining what would happen next, but it was all just white noise filling the room around me, while my eyes focused on memorizing her sweet figure, and my mind filled in the gaps of things I couldn’t see. I imagined the ways her nose and mouth might resemble her brothers, and I wondered if her eyes were shaped like my husband’s or mine. We walked out of that office with a few pictures tucked inside an envelope, images that I look at today with as much pride as the hundreds of pictures we’ve taken of our sons.

The weeks that followed were accompanied by a grief I felt in every limb. It was heavy and physically painful; it moved me in places I had never been shaken. Today, months later, I am frequently surprised by this sadness that resurfaces and the depth of my longing to kiss her cheeks.

It is estimated that miscarriage occurs in one in three pregnancies, and research has shown that many parents will grieve their loss for years, regardless of whether or not they go on to have healthy babies in the future. Women are also more likely to have postpartum depression following subsequent pregnancies with normal deliveries. Men may exhibit anxiety and depression after a miscarriage, but they often receive little support for their emotions as fathers.

On the day I found myself making small talk with a stranger in Target, trying to sort words into sentences while privately knowing that I was still bleeding from the baby who had been growing inside me but was now gone, I realized that this is often a silent grief, afflicting men and women we interact with each day—at work, in the grocery store, waiting at the bus stop, standing in front of us for communion on Sunday. It’s a quiet world of mourning, full of parents and grandparents and siblings walking amongst us, pushing forward.

Clinical psychologist Dr. Janet Jaffe notes that because miscarriage is a common source of pain, “the impact of miscarriage is often underestimated.” She describes it as “a traumatic loss, not only of the pregnancy, but of a woman’s sense of self and her hopes and dreams of the future. She has lost her ‘reproductive story,’” says Dr. Jaffe, “and it needs to be grieved.”

While her observations are certainly accurate, I would suggest that they are incomplete.

The cultural language surrounding miscarriage is careful and politically correct, and despite its best intentions, it leaves many parents conflicted about the appropriateness of their feelings and without words to process their experience. Words like “fetus” and “pregnancy loss” do not validate their grief over a baby who existed and is now gone.

The language we use creates a framework for explaining what has happened. So, when that framework implies that the loss was anything less than a living human being, parents may try to reason away their tears or at least hurry past them, because culture is telling them that this is the loss of a dream rather than the loss of a child.

Speak for the Parents

I recently cried with a friend over the girls we had both carried but never held. Like many of us, those first weeks after the miscarriage for my friend were disorienting and full of shock. Speaking about her pain seemed unbearable, but when she was ready to talk, it appeared that the world had moved on and the doors for deeper conversation were closed.

With an unseen trauma like miscarriage, it can be easy to forget it’s even there until it affects us directly.

By keeping the conversation open and establishing sacred pockets for gathering and talking, we leave the invitation on the table so that grieving parents can enter when their hearts are ready.

When we as the church speak about it more openly, we create a safe place for parents to celebrate the life that was and mourn its untimely passing. By keeping the conversation open and establishing sacred pockets for gathering and talking, we leave the invitation on the table so that grieving parents can enter when their hearts are ready.

What if we created a system of support within our local churches that was specific to miscarriage? We say that we celebrate life at all stages, we believe that God is a healer and brings light to dark places, and we support ministries that are specific to groups needing unique care. Perhaps these values can come together in a way that is intentional—small groups for parents to find community, classes designed to help couples process what is happening, and mentoring from those who walked the difficult road that they are just beginning.

What if the church served as a support center for those reeling from the loss of a baby, regardless of their religious affiliations? Jesus said that the world would know we are his disciples by our love. Imagine the love we could pour over our communities by providing focused care to an often forgotten demographic.

Speak for All the Little Ones Lost

The hypocrisy of abortion becomes glaringly evident when a woman unwillingly loses her unborn child. Society has said that babies in the first half of pregnancy aren’t babies yet. They are embryos and then fetuses, not living infants. The line at which life begins has been blurred, and the oddity of it all comes into clear focus the minute a mom learns her baby is gone and that the heart that was beating last week is not beating today.

Legally, I had to make a decision as her parent, but legally, I could also choose to have the same procedure done with a healthy, live baby.

On the morning of my dilation and curettage, I sat in a hospital bed and cried quietly while nurses asked me questions and drew blood and a mix of operating room staff stopped by to introduce themselves. I longed to be asleep and yet I dreaded the final push into the OR, because at least on that side of surgery, my womb still held the body of my girl. When I woke up, an eerie sense of emptiness would follow, and I was in no hurry to get there. In the packet of papers I had to sign while waiting, there was one that my husband and I were required to sign together. We had to give permission regarding what would be done with her remains, and for the first time since checking in, it wasn’t designated for the “patient.” We both signed lines that said “parent signature,” and gave our mutual consent for what would happen with our baby.

Our culture is sending mixed signals. Legally, I had to make a decision as her parent, but legally, I could also choose to have the same procedure done with a healthy, live baby. The language being used and the messages they are communicating cannot truly stand due to their own contradictions. This is the place we can speak into.

There are many ways to address abortion. Some are helpful and some are not. Maybe there’s more to this idea of changing the conversation. Maybe each time we talk about miscarriage, cry over its tragedy, and celebrate the life that was, we at least raise room for others to question. Perhaps we take steps to normalize the idea that those tiny heartbeats represent living children and, without needing to point fingers, we speak for them by celebrating their lives.

Let’s speak from a place of love. Love for the moms and dads ready to talk about their children, love for the babies who moved straight into the arms of the Father, and love for a culture needing fresh dialogue over a painfully divisive issue. When our words are infused with a love that is dripping with Jesus, they become words that can change the world.

Cara Joyner is a writer and mother with a history of work in student ministry. In recent years, she has come to raise her boys and pursue new ministry opportunities while staying actively involved in her local church. She writes at www.CaraJoyner.com.