Overcoming insecurity when you’ve made a misstep
Sherry Surratt 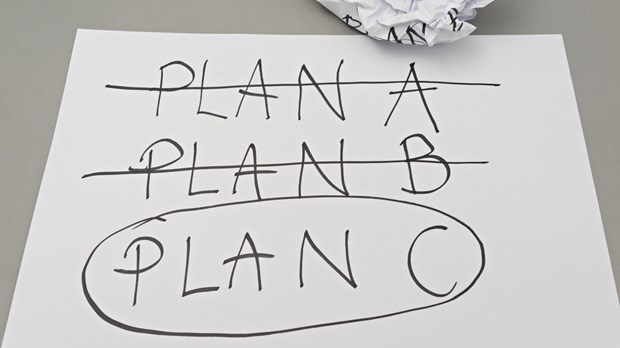 If you were to name one of the biggest roadblocks to your leadership, what would it be? The first thing that comes to mind might be the lack of a typical leadership skill like decision-making or vision-casting or strong communication. However, it’s often not the lack of a certain skill, but rather the fear of failure that poses a real danger to our leadership and those we lead.

Have you ever had to lead a person who is insecure? It’s miserable, isn’t it? They question themselves. They hesitate. They talk themselves out of decisions and sometimes end up apologizing too much or make excuses. Sometimes they swing back and forth between being defensive and over-internalizing. They are just flat-out difficult to lead.

Now imagine following an insecure leader. They are indecisive. They hesitate. They second-guess themselves and lack clarity. Sometimes they take too long to create a plan and other times they act impulsively. They create an insecure climate for those they lead and sometimes, without realizing it, they frustrate and confuse those around them.

The Bible compares an insecure leader to something being blown this way and then that way by the wind (James 1:6). Insecurity resulting from failure can truly be a monster in your leadership, and if you don’t pay attention to it, it only grows.

What Are You Afraid Of?

The research is interesting regarding women and their fear of failure. It’s one of the top things that women admit to struggling with, and we often say it’s the hardest hurdle to overcome. Why is this? Some research says it’s tied to how we were brought up. Many girls were raised to be obedient rule-followers, to minimize their risk-taking side. Other research says it’s because there are fewer female figures who model risk-taking and courage. I’m not sure why women seem to struggle more than men with facing failure, but we do.

I noticed this in myself when I took on a new leadership role. I needed to make decisions I’d never made before. The responsibilities were bigger than in my previous roles. I was having to learn things at a faster pace, and while I’m usually a confident decision-maker (sometimes too confident), I began to notice that I was questioning myself at every turn. Then it happened: I tried a new idea that didn’t work out too well. I bumped up against some criticism from my team and I could feel the people-pleaser side of me start to panic. How could I fix this? What would people think? How could I regain confidence in my leadership? I started to equate the failure of my idea with the failure of me.

I’d been in leadership long enough to know the power of a mentor and how to ask for help, but here’s what’s interesting: I did the opposite. I powered up and tried to work harder to prove my leadership. I relied more on myself instead of reaching out to others. I listened only to my own perspective, instead of letting others normalize it for me. Instead of letting the mistake grow me, I let it shrink me. At the same time, I let the failure grow in my head until it became larger than life, distorted into something much bigger than it really was. And this, I believe, is the effect of insecurity: it shrivels our confidence to the point that we become a very small leader, and then dreaming big and casting bold visions becomes very, very hard.

When we make mistakes, no matter how big or small, God doesn’t throw up his hands and give up on us. We shouldn’t either.

So what can you do? I think the first step is to identify the fear and call it out. In my case, I suspected that I was falling into the trap of insecurity due to my fear of failing again, so I asked a friend who knows me well to speak into my life, asking her “Do you see me acting insecurely? Is my courage shrinking? Am I letting this failure define me?”

I was lucky my friend spoke honestly, pointing out several examples of how she had seen me change since the new idea I’d tried went south. She was right and wisely advised me to do three things to get myself back on track:

• Force Yourself to Try Something New Every Day. This sounded silly to me, but it helped. I started with things that had nothing to do with my leadership. I tried a new food. I drove a new route to work without my GPS. I started reading different types of blogs that I had never read before. After I tried something new I would tell myself, I’m an adventurous person. I have good instincts. I can figure things out. Simply saying this out loud spoke volumes to my soul and reminded me that I am confident. I love adventure. I can try new things without fear. I started telling myself that God made me a secure person and leader, and I started acting my way into the feeling.

• Get Realistic About Failure. Here are some things I knew in my head but didn’t really believe in my heart: Failing is how we learn. It’s good for me to fail sometimes. Everyone fails. I need to embrace failure as my friend.

These are good platitudes, aren’t they? But do we really believe them?

I started reading about famous leaders who had failed. Jerry Seinfeld was booed off stage in one of his first appearances. Oprah Winfrey was fired from her first television job. Fred Astaire was told he couldn’t act or dance. I read about how these people not only failed, but failed in front of everyone. But these failures actually led to their success. I noted that in every case they admitted that failing wasn’t fun, but they just kept going with even more determination. They saw failure not as their end, but as their beginning. It wasn’t their failure that defined them, but how they reframed the failure that made the difference.

In the Bible we see numerous examples of failure. David had a moral failure when he pursued Bathsheba (2 Samuel 11). Peter failed Jesus by denying that he ever knew the Savior (John 18:15–27). From Jonah to Jacob to Moses, we see folks who messed up but didn’t give up, and God used their failures as starting points to achieve great things. When we make mistakes, no matter how big or small, God doesn’t throw up his hands and give up on us. We shouldn’t either.

• Get Over Yourself. Your failures and shortcomings seem much bigger to you than they do to anyone else. Other people might notice your mistake, but they aren’t obsessing over it. They are too worried about themselves. Don’t blow your imperfections into bigger ordeals than they are. Relax. Know that you are a leader. Do your best and believe that your best is enough.

Your failures and shortcomings seem much bigger to you than they do to anyone else.

I took these actions one step further and asked God to help me reframe how I saw myself and what I really believed about leadership performance and failure. I asked him for new courage and to help me step back into the confident leader he created me to be.

How about you? Here are some questions to consider in your own life:

• Do you see signs that a fear of failure is affecting your leadership? It might take the form of hesitation or excessive worrying or constantly questioning yourself. Have you named it for what it really is?

• Do you harbor beliefs about your failures that drain your security tank? Are they coming from your own head or from someone else? Do you view failure as God does?

• Is there a failure from past leadership that haunts you or has caused insecurity to attack your leadership? What can you do today to begin to move on?

Maybe it’s time not only to reframe what you think about failure, but also to reframe what God thinks about you as a leader. He’s on your side, and he’s ready to help. Just because you are a woman in leadership doesn’t mean you have to continue struggling with the fear of failure or the insecurity that can arise from it. Remind yourself that you are not alone in failure. Every leader faces it—what really matters is what we do with it.