What clothing has to do with becoming more like Christ
Lauren F. Winner 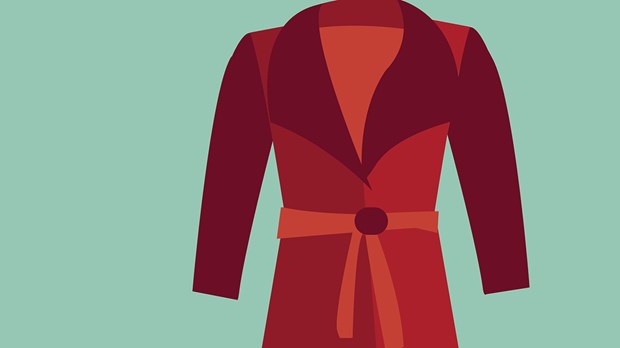 Have you ever had the experience of reading something and automatically assuming you know what it means—indeed, you are so certain of the meaning that it does not occur to you that you are doing any interpretation? And only later do you learn that there are other equally plausible (or more plausible) meanings in what you’ve read? That is my experience with the garments of skin God stitched for Adam and Eve right before they were exiled from the garden of Eden.

Here is what the scriptures tell us: the man and the woman have eaten the forbidden fruit, stitched fig leaves together to cover their newfound vulnerability, and hidden from God. God
has discovered their wrongdoing, and pronounced punishments upon them. Then God is just about to banish Adam and Eve from Eden—but in a gracious and merciful response to their sinfulness, God first dresses them properly. “The Lord God made garments of skin for Adam and his wife and clothed them.”

I have known about those garments, and the fig leaves they replaced, since childhood Sunday school—and I have always understood the description in Genesis to mean that God clothed Adam and Eve with their own skin. In my imagining, they needed skin in order to live in the non-Eden world, and so God gave it to them, right before expelling them from the garden.

It was not until recently, when I read Gary Anderson’s book The Genesis of Perfection, that I realized a more straightforward interpretation might be that Adam and Eve had skin from the
start, and that after the Fall, God clothed them in garments of animal skin—which would be sturdier and warmer than their self-fashioned fig-leaf garments.

I was relieved to find out from Anderson that I am not the only person to think that the garments in question were Adam and Eve’s own skin. Many rabbis have also read Genesis 3:21 that way, seeing the garments of skin as not “a separate piece of clothing to be put on like a jacket but as human flesh itself.”

So there are at least two different ways of reading what is happening when God clothes Adam and Eve, and I find that I now need both interpretations. In the human skin interpretation, there is the wonderful implication that Adam and Eve become fully human only upon leaving the garden. The Fall is the Fall—but it is also the culminating step in Creation. That was, perhaps, the logic of God’s Creation all along: to become fully human, Adam and Eve had to leave Eden, and God clothed them with their humanity as they left.

But I also like my friends’ less idiosyncratic and more widespread interpretation—that God made Adam and Eve dresses of rabbit fur, trousers of bearskin. This interpretation underlines the mercy in God’s response to Adam and Eve’s sin. Indeed, God’s clothing them is the first disclosure of something we see over and over in the Bible: God’s deep, abiding interest in
working with and for human beings.

The Role of Clothes

Ever since God clothed Adam and Eve in their full humanity, clothes have not only protected us from elements and kept us warm; they have also profoundly shaped our identity and our
sense of self. It is surprising, then, that clothing is an image that runs all the way through Scripture from the first mention in Genesis to Revelation, where the gathered community of
worshippers is clothed in robes made white by being laundered in the blood of the Lamb. To my eye, the image sitting at the center of all the Bible has to say about clothing is Paul’s startling statement in Galatians 3: “As many of you as were baptized into Christ have clothed yourselves with Christ.” God doesn’t just clothe us with skin (or rabbit fur); God clothes us with God’s own self.

I find the notion of God as clothing to be endlessly suggestive. I have some sense of what my clothes do to and for me each day, how they act upon me, what they mean for my life and identity. What might it mean to understand myself as clothed in God? What does it mean to imagine God as a warm winter coat? As a handmade bespoke suit? As a beloved cardigan sweater, purchased in Galway on your honeymoon—chunky purple wool, with fisherman’s knots?

What God Has to Do with Fashion

I have come to a large department store in Raleigh to see what I might see in Galatians 3, if I read it among actual clothes—if I read it among the racks of jersey dresses and boiled wool jackets and burnout velvet tops.

The first thing I notice is a large poster of a woman strutting down a runway in an outfit I could never afford and would not be caught dead in if I could. She seems to be wearing seven-inch heels. Appropriately enough, the caption at the bottom of the poster reads “The Height of Fashion.”

“Fashion” is a noun, calling to mind Paris runways, models in Jean Paul Gaultier creations, Elle and Marie Claire magazines. But “fashion” is also a verb. It means “to mold or to shape.” We
fashion dough into the shape of a bread loaf; we fashion clay into a pot or a bowl. Indeed, the word “fashion” had that meaning—the action of making or shaping something—before it became a noun designating clothing, and “fashion” came to designate apparel precisely because clothing shapes us. This is why some of us enjoy clothes so much, why we love changing our clothes and trying out a different look—every time we change into a different
kind of clothing, we can play at being a different kind of self.

Clothing Yourself with Christ

"Are we daily, as sure as we put on our clothes in the morning, putting on Christ the Lord?"

I take out a note card and copy down MacLaren’s words. I will tape the card to my closet door.

I become professional or hip, depending on what I am wearing. I feel different when I am wearing different clothes. I act different. I let my Talbots suits and my vintage shirts remake me in their image. I want to let Jesus do the same.

Lauren F. Winner is an ordained Episcopal priest and the author of numerous books, including Wearing God, Girl Meets God, and Still. She teaches at Duke Divinity School in Durham, North Carolina. Her articles have appeared in the New York Times Book Review, The Washington Post, The Wall Street Journal, Books & Culture, and other periodicals. Visit her website at LaurenWinner.net. This article was adapted from Wearing God: Clothing, Laughter, Fire, and Other Overlooked Ways of Meeting God. © 2015 by Lauren Winner. Used by permission of HarperCollins Publishers.