We’re made for more than meek and mild.
Margot Starbuck 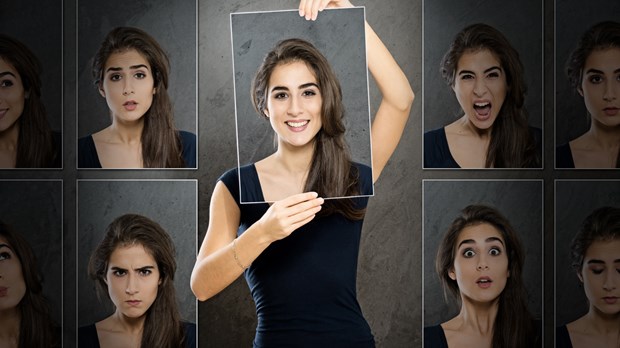 When I’m driving behind that vehicle, whether it’s a jazzy orange sports car or a black pick-up truck sporting a gun rack, I’ve never once mused to myself, That driver is probably a Christian.”

Typically, we’re polite. We avoid profanity. We usually don’t fight others with our fists. We avoid getting caught gossiping. Christian women are stereotypically, at least superficially, nice. And while being a “nice girl” might have once been desirable (possibly in the 1950s to distinguish one’s self from “bad” girls, like Rizzo from Broadway’s Grease), today it suggests someone without much spark. Someone who avoids confrontation. Who won’t ruffle feathers. Who doesn’t take risks. Who prioritizes “polite” over “right.”

With all due respect to the really “well-behaved” women out there: yuck.

I’m not proposing we ought to taunt sweet Sandra Dee or start a brawl to prove we’re not the boring variety of “nice.” But I do want to suggest that although our culture may have appropriated “nice” and applied it to well-behaved Christian women, “nice” that avoids conflict for the sake of keeping peace isn’t a Christian value.

A more biblical way to identify ourselves, I’d argue, is that we are anointed. We’ve been equipped and charged to carry out the mission of Christ in the world today. As anointed ones, we reflect the fruit of the Spirit Paul describes, like a lot of nice people do: love, joy, peace, patience, kindness, goodness, faithfulness, gentleness, and self-control. But there’s nothing about the Christian expression of these virtues that is perfunctorily polite, weak, or riskless! Jesus-style fruit—loving our enemies, pursing peace in a violent world, choosing kindness, practicing self-control—is radically countercultural. And in addition to radical fruitfulness, the anointed person is the one who embraces the mission of the kingdom Jesus ushered in.

In 1563 Christian leaders gathered in Germany to draft a teaching instrument that became the Heidelberg Catechism. It asks why Jesus is called “Christ” (which means anointed), then answers it is because he was ordained by God to be “our chief Prophet and Teacher . . . our only High Priest . . . and our eternal King.”

Where it gets really interesting is when the next question in the catechism asks the student why he or she is called a “Christian.” The response?

Because I am a member of Christ by faith and thus share in his anointing, so that I may as prophet confess his name, as priest present myself a living sacrifice of thankfulness to him, and as king fight with a free and good conscience against sin and the devil in this life, and hereafter reign with him eternally over all creatures.

Did you hear it? The Christian—man or woman—is anointed as prophet, as priest, and as king.

Sure, sure, we don’t often string together a lot of those fancy words today. But our mission, which rubs against the grain of propriety, is very clearly articulated: We must carry on Jesus’ prophetic, priestly, and royal ministry—never by our own might but as we’re led by God’s Spirit.

The calling of Christian women is actually the opposite of bland, low-grade “niceness.”

For starters, in response to Christ’s mandate to make disciples of all nations, we’re called to imitate Christ’s prophetic ministry as bearers of oddly good news. No one ever described the ancient prophets—the ones calling out the sins of Israel in God’s name—as “nice.” Fiery? Yes. Bold? Absolutely. Annoying? Possibly. Jesus continued in that prophetic tradition by asking some nutty stuff of his followers: Cut out the eye that causes you to lust, give a thief your coat, love your enemies. I assure you that no one in the first century was accusing Jesus of being nice. As bearers of offensively good news in the world today, we won’t necessarily be seen as nice either.

Secondly, we were made to imitate Christ’s priestly ministry by living sacrificial lives of love that connect others to God. The writer of Hebrews affirmed to the new Christians who had come from a Jewish background that Jesus was their High Priest, the way Melchizedek had once been. But rather than performing the expected ritual sacrifice to atone for the sins of the people, in his death Jesus became the atonement for us all. Today we’re invited to lose our lives for Christ’s sake and for the sake of others.

Finally, imitating Jesus’ royal office, we’ve been called to battle sin and to establish justice. When Jesus identified his first century followers by announcing, “You are the light of the world” (Matthew 5:14), he was issuing a radical charge. Folks in the ancient world would have heard his announcement much differently than modern listeners because this idea of “light” was commonly associated with rulers (for example, see Psalm 132:17–18). Jesus was asserting that all who followed him, then and now, were to take up the royal office to execute God’s justice—on earth as it is in heaven.

Prophetic boldness denounces comfortable niceness (niceness not aligned with God’s purposes). Personal sacrifice, patterned after Jesus’ life, death, and resurrection, replaces rote ritual. Royal righteousness (religion that defends the cause of the widow, the orphan, and the oppressed) often induces conflict rather than avoids it.

Whoever first said that “well-behaved women rarely make history” was telling the truth.

Well-behaved women don’t prophesy the way Phillip’s daughters did. They don’t barge into a fancy men’s supper to anoint the Messiah, as a priest might, with pricey perfume. They certainly don’t serve as leaders of house churches across the Roman Empire the way Priscilla, Chloe, Lydia, Apphia, and others did.

To be clear, Christian women were never called by God to be nice.

Today, the ones who are living out their sacred anointing might not be considered nice at all. They’re confronting evil and proclaiming the good news of Jesus Christ in churches and among those who live outside. They’re frequenting strip clubs where they’re building relationships with the women who work there, connecting them to God again or for the first time. They’re standing before local courts around the world, advocating for the release of those who have been trafficked.

Today, Christian women have sacrificed “nice” for “anointed.” And they’re making history by establishing God’s new kingdom on earth as it is in heaven.