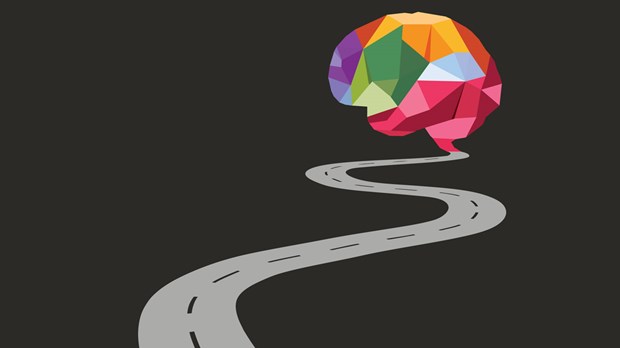 If you’re like me, it’s impossible to see a personality test and not take it. Myers-Briggs, StrengthsFinder, Five Love Languages, Process Communication Model—I’ve pursued many. And those don’t even include the BuzzFeed quizzes that tell me which Frozen character I’m most like.

I know I’m not alone. Our collective quest to discover the shape of our individual personalities shows what a mystery we are to ourselves. In the Christian tradition, however, a spiritual understanding of personality and “the self” serves as a journey to God rather than just a fun pastime.

The Enneagram is easily my favorite model for discovering personality. Though you can find a more in-depth explanation of the Enneagram elsewhere, it is essentially a personality-typing model of ancient Christian origin that looks at one’s underlying motivations rather than outward traits. It examines these by determining that everyone is one of nine types (ennea means “nine,” gram means “symbol”).

The origins of the Enneagram go back to the Desert Fathers when a monk named Evagrius Ponticus composed a list of eight primary sins plus one unnamed sin (later further refined to the seven deadly sins). In its modern form, the Enneagram was articulated in the 20th century as a tool for self-understanding and spiritual transformation. It only recently gained broader cultural attention.

Though the Enneagram is gaining popularity, people can often have a negative reaction when engaging it. Why? Leigh Kramer, a Christian Enneagram coach, puts it simply in her talk with Tsh Oxenreider: “You have to really confront your junk.”

Being told my personality is more of an Elsa than a Kristoff doesn’t ask me to confront anything (with the possible exception of how wisely I’m using my free time). In fact, such shallow engagement with personality only serves to affirm my attachment to my self-image and patterns—many of which are less than ideal. In contrast, tools like the Enneagram can help us to see these patterns and know ourselves more deeply (junk and all) in light of God. The Enneagram intentionally cuts through the self-images we desperately try to maintain, and it diagnoses everyone with the same affliction: We can’t remember who we were created to be.

When I facilitate introductory Enneagram book clubs (“just for fun”), people often mistype their own personality. Women, in particular, have to overcome cultural messages in order to realize who they really are rather than being defined by the roles they’ve been told to play. But knowing ourselves is essential, regardless of gender.

Russ Hudson, a founder of the Enneagram Institute, says that knowledge of ourselves and knowledge of God are a package deal. Someone who is alienated from herself cannot know God; likewise, a person terrified of knowing God cannot truly know herself. Hudson is only articulating what the likes of John Calvin, Augustine, and others in the Christian tradition have said.

The first of three progressive stages we go through in the spiritual development of personality is recognizing we each have a carefully crafted sense of self that we’ve acquired from our individual experiences, families, genes, culture, and so on. This sense of self isn’t bad—far from it actually. But it is manufactured. It’s often referred to as “the false self.”

In the Enneagram model, the false self is also called the “ego.” It only understands reality transactionally. For example, I’m important because people like me, or I made a mistake; therefore, I’m worthless. It’s the part of you that thinks you will be more—that you’ll be valuable, good enough, lovable—if you can live up to the goals that you and others have created. Kramer notes how often people learning the Enneagram “will answer aspirationally—how they want to be instead of how they actually are.”

For me, my false self is tied up with doing things right and avoiding all criticism. If I’m good and make no mistakes, then I’ll be worthy of love. It doesn’t take long to see how living up to these messages is not only impossible but reveals a false belief that we can save ourselves through effort.

Dr. Irene Alexander, psychologist and Dean of the School of Social Sciences at Christian Heritage College in Brisbane, Australia, describes the false self this way:

The false self is formed by fulfilling all the internalised rules and requirements to gain acceptance and approval by those we value—including God. We often are not even aware that we have transposed these beliefs on to God and yet we spend our lives living according to certain internalised patterns of behaviour that we think will gain God’s approval.

So, for example, when I do a good deed and believe that I have gained God’s approval and love as a result, I am living—and acting—out of this false sense of self. My own internalized patterns of behavior, based on my experiences, thoughts, and feelings, do have real significance. They matter. But they do not constitute what is most real and important in me: my deepest identity in God.

Imagine that you have developed amnesia and can’t remember who you are, what you like, or what you’ve done. Would you still be you? Hudson says that the ego’s answer is a resounding “No!” The ego can’t imagine being without achievements, relationships, and all of the hard work it has done to be lovable. While this idea resonates with many of us, the heart of these messages contradicts the mercy and grace found in God.

For me, prone to believing my good behavior is directly tied to God’s love for me, dismantling the false self means trusting that God’s love goes endlessly beyond what I could “earn.” Only by seeing the inadequacy of the false self I’ve created can I begin to recognize the “true self” that is given by God.

Discovering this true self is the second stage of personality development in the spiritual life. Instead of being cultivated, my true self is an identity—a personality—that is directly given by our Creator. It’s not dependent on circumstances or résumés because it is much deeper than the false self. It is the “inmost being” spoken of in Psalm 139 that is not just my unique DNA or physical body but my deeply-known, God-given identity.

I think we often settle for lesser identities. God may have crafted you as an extrovert who’s naturally energized by interacting with others. Or, perhaps, you’re intuitive and have an uncanny ability to pick up on other’s needs. These are true gifts, but are they your inmost being spoken by the psalmist? Our “true self,” our identity in God, is something deeper than labels and can never be taken away.

“The true self is found in abandonment to God,” Alexander says. “It is most easily identified by remembering an experience in which we had a revelation of God’s utter acceptance of us—a time when we knew as deeply as we have known anything that we are loved simply for who we are—there is nothing we can do—it is, after all, all grace.”

The Enneagram refers to the discovery of the true self as “remembering”—in the sense that we remember who we really are. This is what we’re all trying to do when we take those personality tests; we’re looking for affirmation of who we think we really are. Many of these tests and quizzes just confirm our own self-images, and they are likely to change from day to day or year to year. But the Enneagram can actually help you move beyond these temporal, surface-level insights in order to see your true self, the you that is given by God and can never be altered, diminished, or taken away.

There are things that make each of us unique and particular and lovable. However, we often have a very difficult time remembering this foundational identity. But if we don’t make the effort to know our true self, we’ll be stuck in our false self. And if we’re distant from our true identity, how can we ever hope to know God’s?

The third stage of personality development in the spiritual life is to be so completely identified with God that you realize the true self you see in a mirror isn’t just an image of you but is an image of God (Genesis 1:27). You see your Father’s likeness.

I think this is what we taste when we have a moment of the Holy Spirit inexplicably working through us. In the Enneagram, each of the nine types of personalities can be “redeemed,” and when someone is living out of a healthy and redeemed sense of self-understanding, being fully present with that person feels like a gift from God. It’s an opportunity to see Christ shine through them (Colossians 1:27).

This divine knowledge of ourselves is why Thomas Merton could say that even the true self is lost in God. He didn’t mean that people are annihilated in God but that they can become so identified with God that they become his hands and feet (1 Corinthians 12:27). The true self has no life of its own because whatever part of it that is true is wholly within God and is therefore identified with him.

“God Himself begins to live in me not only as my Creator but as my other and true self,” Merton says. You realize that your true self is amplifying your individual particularity but that this particularity is really the divine image within you, which is why Paul could say, “It is no longer I who live, but Christ lives in me” (Galatians 2:20).

I’ve found that this journey of discovery involves hard work, but it has also enriched my life with so much hope, beauty, and meaning. This inner discovering that we do (and that is done to us) is a path for meeting the Creator of the universe. And while this journey to know, understand, and embrace one’s self begins here on earth and cannot be fully realized until we sit with Jesus for all of eternity, our union with God today as members of his body is more real than our distinction and separateness. This brings fullness to our understanding of dying to ourselves; it prompts us to die to the notion that we have a real “self” that is outside of God’s infinite life.

As Jesus says in Matthew 16:25, “If you try to hang on to your life, you will lose it. But if you give up your life for my sake, you will save it.” The only self you have is wholly identified with God because it is infinitely known by God, lovingly sustained through God, and eternally belongs to God. What greater personality could you ask for?

Samuel Ogles is an assistant editor and marketer for Christianity Today’s Church Law & Tax. He’s an ardent Enneagram advocate and a student at the Living School for Action and Contemplation. He lives in Wheaton, Illinois, and you can find him on Twitter at @samuelogles.