How not to waste your gift
By Maria Cowell 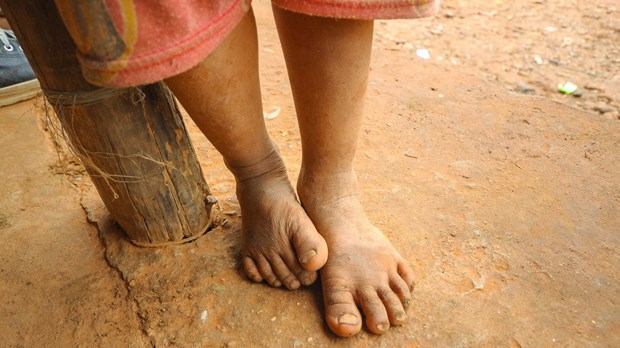 Despite a slowly rebounding economy, Americans continue to give. With the holidays just past, no doubt many shoppers dropped coins and cash into the familiar red kettles or gave an above-and-beyond year-end gift to a favorite nonprofit before December 31. The question is, how far did their dollars stretch?

“Increasingly donors want to know their charitable investments are smart choices. They are more apt to do online research before they give,” says Sandra Miniutti, CFO and Marketing Vice President at Charity Navigator. “Donors are proactive and do not want to settle when looking for a charity to support.”

How will you make a difference in a world full of need? How can you make sure your giving has a real impact? If you want to make sure your dollars are well spent, we’ve got some simple steps for you to follow to ensure you get (and give) the most benefit from your buck.

There are more than a million nonprofits registered with the Internal Revenue Service spanning a myriad of health, environmental, humanitarian, arts, education, and social services, so donors have their work cut out deciding where to give and assessing their gift’s impact.

How will you make a difference in a world full of need?

Before you write that check, investigate your nonprofit. You can start your research with groups like Charity Navigator, Charity Watch, and the Evangelical Council for Financial Accountability (ECFA). These organizations give 4-star ratings or their seal of approval based on effectiveness in areas such as governance, percentage of funds that go directly to programs, financial health and accountability, and transparency.

Look for more than a seal of approval. Certification by an agency does not always mean bang for your buck. While ratings are straightforward, impact is subjective and can be measured in varied ways, such as the number of meals served or people reached, an increase in revenue, surveys, or before-and-after studies. One study by renowned economist Bruce Wydick claims that cost effectiveness of donated dollars for helping the poor is highest for charities that get clean water to villages (such as Living Water International), de-worm children, provide microfinance loans (like Kiva and Opportunity International), donate farm animals (such as Heifer International), fund reparative surgeries (like Mercy Ships), and sponsor children (such as Compassion and World Vision).

This kind of life-changing impact is not limited to Compassion International. Indeed, many Christian charities rank high in efficiency, according to Forbes’s 2013 list of the largest 50 charities nationwide. The study looked at efficiency (income versus expenditures), charitable commitment (percentage of funds for services), and donor dependency. Out of the 50 organization with high marks, 15 were faith-based: Kingsway Charities, The Salvation Army, Habitat for Humanity, Feed the Children, Food for the Poor, Compassion International, Catholic Charities USA, Cru, Operation Blessing International, World Vision, Samaritan’s Purse, Lutheran World Relief, Catholic Relief Services, Catholic Medical Missions Board, and Cross International.

2. Know What Your Giving Is Saying About You

How important is a 4-star rating or a seal of approval to you? And are those the only tools to consider when deciding how best to help others? It’s important to know how and why you’re prone to give a certain way. 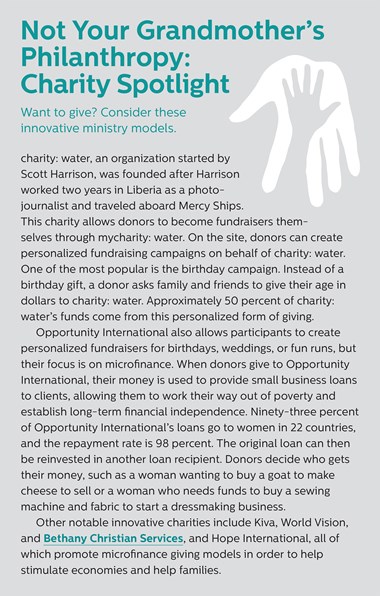 Your giving patterns could depend a lot on your age, says Dennis McCarthy, director of sales at Blackbaud, the leading provider of nonprofit software and services, and editor of The Next Generation of American Giving: The Charitable Habits of Generations Y, X, Baby Boomers and Matures.

Typically, Millennials give more to causes than to organizations and give more through crowd funding and peer-to-peer fundraising. The study found Millennials, who make up 31 percent of all donors, give mostly to children’s charities, health services, and local social services.

“Millennials aren’t relying on their parents’ or grandparents’ standards of accountability. Organizations like Guidestar, Charity Navigator, and Better Business Bureau don’t drive contributions for Gen X and Gen Y. Why? Because they don’t trust them,” says McCarthy, “so when they give to do-it-yourself [organizations], they are really giving to a friend who is raising money, via Kickstarter, Razoo, or Crowdrise.”

Busby believes these new giving platforms can be impactful, but as the younger donors begin to look for tax breaks, they may want to reconsider. “Crowd funding is relatively new and laws that relate to it haven’t developed as fast as the phenomena,” he says. “It is a little unclear how that will shake out and which gifts will qualify as charitable contributions. It’s going to take a while for the law to catch up with the concept, but then again, many of the donors who give to crowd-funding projects don’t really care if they can itemize on a tax return or not.”

Certainly the smaller or less frequent the gift, the less accountability matters. But for donors with complex gifts such as stock, real estate, or recurring gifts, groups like ECFA and Charity Navigator are helpful. “A younger donor right out of college and in a new profession may only give a small amount. That’s not such a huge risk, whereas an older donor with more wealth making substantial philanthropic investments has a greater motivation to ensure the charity’s trustworthiness,” says Miniutti. Of course, that doesn’t mean younger donors aren’t making good decisions about their gifts or vetting charities. They just do so differently than their parents’ generation.

While older donors might evaluate a charity’s trustworthiness one time, younger donors prefer to engage on a continual basis with the charity. The Next Generation of Giving finds that 57 percent of Gen Y (Millennials) want to see the impact of their donation. They do so by following their gift beneficiary on social media (28 percent), sharing about the charity on Facebook (50 percent), and viewing online videos about the organization or project (56 percent). Similarly, roughly half of Gen X donors want to see an impact; 25 percent follow on social media, 38 percent share on Facebook, and 46 percent view videos.

“Not a lot of money gets raised on social media, but as an engagement tool, it’s fabulous. It’s an important way for people to communicate and share common values,” McCarthy says. “You see other people who are working on these issues. You can find out what’s being done with your money and see who else is following the charity.”

Avoid giving to a big reputation rather than a reputable cause. Beyond ratings or social media influence, one caveat all donors should heed is that bigger isn’t necessarily better.

“There are definitely examples of some pretty well-known, large charities that are shockingly inefficient,” Miniutti shares. “You would think with their brand name they would have amazing financial efficiency.”

Rather than looking at an organization’s size, she encourages donors to find a cause they believe in and support a charity doing good work in that area. For example, a large charity feeding the homeless may raise more revenue, but its overhead may also be higher, whereas a local charity may operate more simply and can use a higher percentage of donated dollars to actually feed people.

“Of course when we see a major disaster in the world, 99 percent of us are going to go with the big-name charity that has experience dealing disasters,” Miniutti adds. “But with other priorities in giving, we want to give locally in our community, and many times local charities allow us to participate with them in their work.”

The advantage of a local charity is that donors can actually visit and get a “boots on the ground” feel for the work being done. So often we can disengage from our contributions. Dropping a few bucks in the red bucket on the way into the grocery stores feel temporarily satisfying, but how invested are you in how that money is spent?

The best way to become more invested is to learn more—about the charity, their business model, and the fruits that their ministry is producing. This kind of giving isn’t as easy as making an online donation in between Amazon purchases, but it could provide so much more than just that temporary feeling of accomplishment.

This kind of giving isn’t as easy as making an online donation in between Amazon purchases, but it could provide so much more than just that temporary feeling of accomplishment.

“Sure, check out their website and read their newsletter, but don’t hesitate to call the director and say you are considering making a gift and would like to come by, walk through, and learn what they are doing,” McCarthy encourages.

When you visit the organization or talk with the director, consider asking a few of these questions before you write that check or setup that direct deposit:

As critical as giving to a charity is, it’s essential to remember that financial giving is only a small, small way that we are commanded to give in Scripture. First John 3:17 says, “If someone has enough money to live well and sees a brother or sister in need but shows no compassion—how can God’s love be in that person?” God doesn’t want your money (just like he didn’t merely want burnt offerings); rather, God longs for hearts that love him and love others. Our generous giving should flow out of a desire to serve God with our lives, our gifts, and our resources. Charitable giving could never replace righteous living and restored relationships. 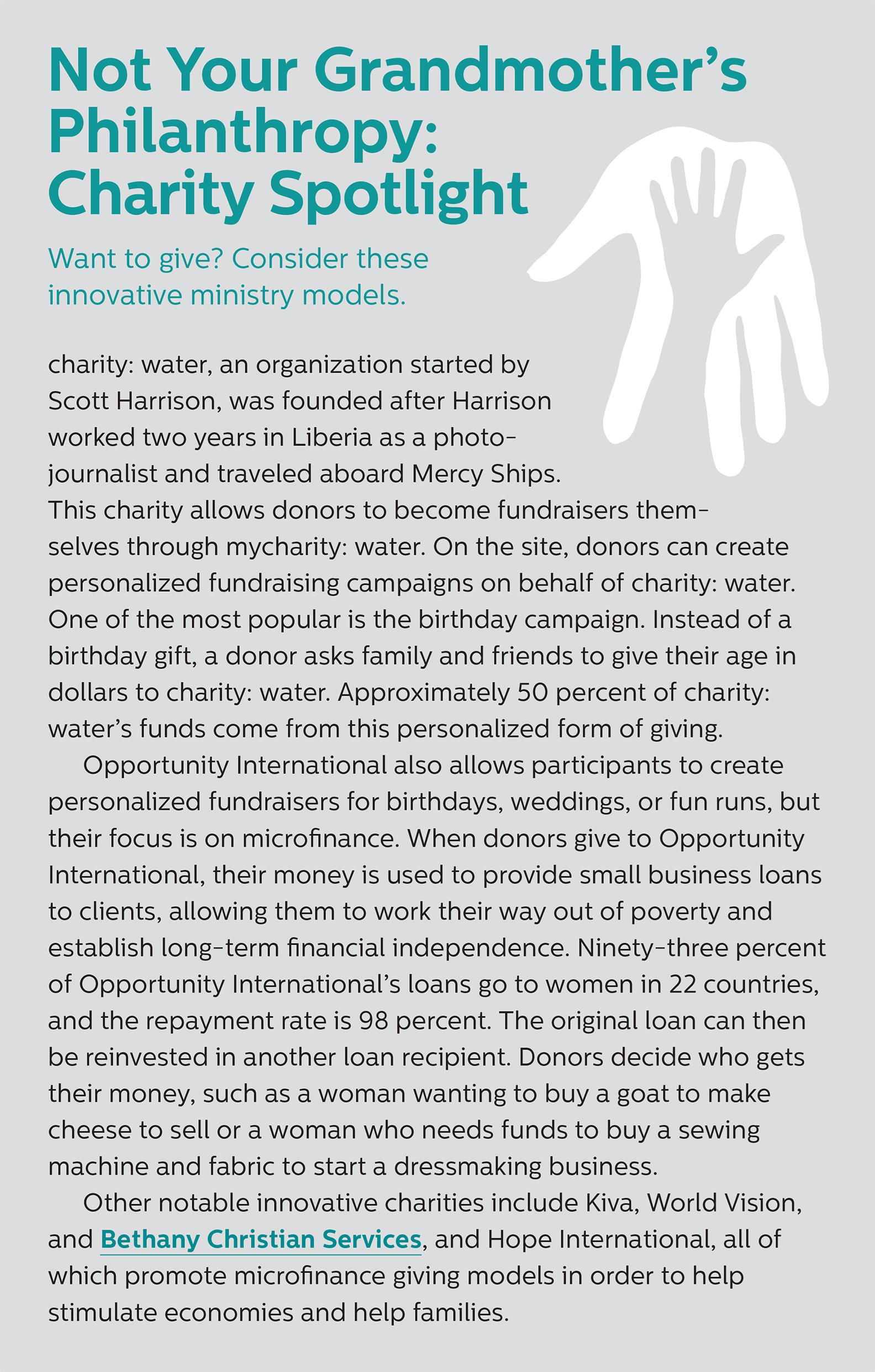