The more we learn from science, the more evidence we find for God.
Dr. Leslie Wickman 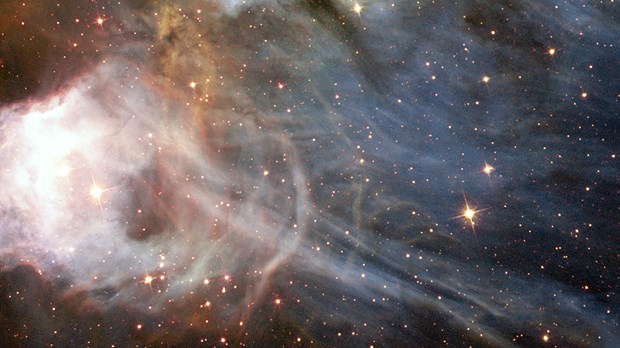 Image: Photo by NASA and the Hubble Heritage Team (STSCI/AURA)

"The creation shows forth [God’s] wisdom and power; notwithstanding its inherent ambiguities, it bears witness to God’s steadfast love and care. The majesty of God, reflected in the creation, is a reason for worshiping and thanksgiving, for trusting and obeying God,” wrote William Lazareth in Confessing the One Faith. As a scientist, I heartily agree. For me, science is a powerful tool that enables us to explore God’s creation, helping us come to know and understand a little more about the One who formed atoms, time, energy, and space—out of nothing.

Scientists and observers alike are perpetually amazed by the intricacy and complexity of our cosmos and the life it supports. All of its minute and complex details fit together impeccably in a perfectly balanced, synergistic system. As we study the complexity of the cosmos—from the tiniest atom to the frontiers of the universe—we quickly realize that chance simply cannot explain the incredible order and elegance of the universe. As the author of Romans says, “Through everything God made, they can clearly see his invisible qualities—his eternal power and divine nature” (Romans 1:20). The more we learn about our universe, the more we discover evidence pointing us toward the Creator who put it all together.

Consider our home planet. Earth is right in the sweet spot of our solar system: the Goldilocks Zone. It’s not too hot, and it’s not too cold. Tilted perfectly at 23.5 degrees, Earth spins on its axis once every 24 hours while revolving around the sun at about 67,000 miles an hour. As a physical scientist, what’s known as the teleological or fine-tuning argument for the existence of God especially intrigues me. It fascinates many others, too, as it’s perhaps the most common argument for God’s existence in today’s technology-fixated society.

Even though possibly 10 percent or more of sun-like stars in the universe could support planetary systems, and thousands of extra-solar planets have already been detected, our exploration efforts so far have not revealed any other places in the universe quite like Earth. Planet Earth’s most distinctive feature is that it’s inhabited. The Old Testament prophet Isaiah remarked:

For thus says the Lord,
who created the heavens
(he is God!),
who formed the earth and made it
(he established it;
he did not create it a chaos,
he formed it to be inhabited!):
I am the LORD, and there is no other. (Isaiah 45:18 NRSV)

Just consider the unique characteristics of Earth that create ideal conditions for life: Earth’s exact distance from the sun and precise axial tilt, its mass and diameter, its atmosphere, its magnetic field, its 24-hour rotation rate, its crust and liquid water.

The myriad of wonders supporting life on our planet point directly to a caring designer. It is exactly right for people to inhabit. It was created for us.

The idea that life developed on Earth apart from a Creator overlooks the reality that Earth’s early atmosphere would not have allowed even the basic building blocks of life to develop because there was no ammonia, methane, or hydrogen available. Baylor University Scientist and Professor Walter Bradley expresses the problem of life coming about spontaneously on Earth:

The mathematical odds of assembling a living organism are so astronomical that nobody still believes that random chance accounts for the origin of life . . . Even if you optimized the conditions, it wouldn’t work. If you took all the carbon in the universe and put it on the face of the earth, allowed it to chemically react at the most rapid rate possible, and left it for a billion years, the odds of creating just one functional protein molecule would be one chance in 10 with 60 zeroes after it.[2]

Many great thinkers throughout human history have argued that design requires a designer. When we contemplate a beautiful building, a spaceship, or a work of fine art, we don’t think these things happened by accident. Why would we think the significantly more complex universe or any living thing was any less purposefully designed?

Virtually all astronomers and astrophysicists of the current era recognize what is known as the Anthropic Cosmological Principle laid out by J. D. Barrow and F. J. Tipler in 1986. This is the idea that there is a long and growing list of universal attributes whose parameters must fall within a very narrow range of values in order for life to exist on Earth.[3] Many of these attributes apply to the universe at large and, therefore, to the possibility of life existing anywhere within it.

This concept is also known as the Goldilocks Principle: none of these values are too big or too small; they are all just right. The number of attributes included on the list ranges by investigator from dozens to hundreds, and the calculated odds of getting each attribute’s value “just right” also varies quite widely between estimators. A probability estimation of 1 chance in 10^250th power is probably pretty close to the middle of the pack. That’s “10” with 250 zeroes after it.

The only real alternative to the idea that there is an intelligent Creator behind our universe is the notion that the entire natural realm came about by chance, but chance has no power to create order. With the odds of all the many finely tuned characteristics of the universe coming together calculated at well beyond the threshold of statistical impossibility, chance is simply not a reasonable explanation.

In the current scientific marketplace of ideas, the touch point for dialogue between science and theology frequently comes down to this discussion of probabilities. Theists tend to point to the purposeful design we see behind the universe and the improbability of all we observe coming together by random chance. Conversely, atheists attempt to improve the odds by speculating on ways to provide more chances that it could have all turned out “just right.”

For God so Loved the Universe

Professors Randy Van Dragt and James Clark highlight an important point about God’s relationship toward this universe he has created:

In Romans 8:19, Paul tells us that all of creation is looking forward to the salvation of God’s people, for therein the creation itself will be relieved of the curse to which it was subjected through the fall of humankind. Personal salvation in Christ eventually translates to the redemption and restoration of all creation. This bears out God’s redemptive intent expressed in John 3:16, where Jesus says, “For God so loved the cosmos [all that He had made] that He gave His only Son.[4]

Jesus was saying in John 3:16 that God loved the cosmos: the entire universe and everything in it! As scientists continue to study its complexity, from the most miniscule quark or lepton to the dark energy fueling the expansion of the universe, it becomes increasingly clear to me that God must truly love his creation. The scale of the universe is beyond comprehension to most of us, yet the more we learn about it, the more we realize that none of it is wasted space.

The physical laws of nature—obvious whenever we look at Hubble Space Telescope images of galactic star nurseries or multiple images of the same star due to gravitational lensing—point to a Creator. He is a God of power, order, rationality, and care for creation who, according to the cause-and-effect logic of the cosmological argument, must exist outside and apart from the created realm of space, time, matter, and energy. At the very least, this much can be read from the book of nature.

The fact that we humans not only survive but rather thrive in our environment tells me that the Creator loves us deeply and lavishly. God could have created a world without vibrant colors (picture a glorious sunset or those Hubble images), delicious flavors (imagine your favorite foods), and beautiful sounds (think of a waterfall or your favorite music), but he didn’t. None of these are a necessity for survival but rather the loving gifts of a generous Creator.

The exquisite design of the universe, from the very beginning to its farthest reaches and its infinitesimal details, is just right. Its physical laws point intelligent, spiritual creatures toward their loving Creator. In worshipful response, we ought to take good care of all the lavish gifts he’s given us. Creation reflects our marvelous Creator, and the more we study it, the more we catch glimpses of the face of God.

Photo by NASA and the Hubble Heritage Team (STSCI/AURA)