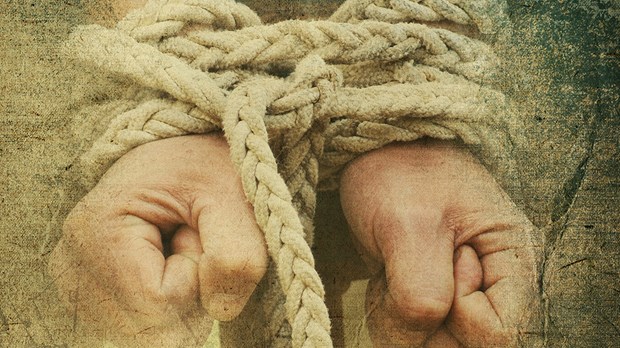 As a child, I was raised by deeply faithful parents and was exposed to the gospel in many different ways. But I vividly remember asking myself when I was in high school, What really is the point of Jesus? That question came from a place of deep pain and disillusionment after a close family friend was killed by a drunk driver. I began to understand that Jesus is the one who enabled me to be reconciled to God, but also the one who heals, the one who redeems all the places that are hurt and broken.

God continued to draw me closer as a college student. Being involved in Campus Crusade (now called Cru), I was surrounded by people who couldn’t get enough of studying the Bible. We’d discuss it literally every day, always encouraging one another to go even deeper.

One of the Scripture passages that became really important to me at that time was Isaiah 58. I was blown away by how it spoke of what I had personally experienced with God. I had experienced God as the one who breaks chains and loosens the ties of the yoke and sets the oppressed and the prisoner free! I understood this passage primarily in light of my own spiritual experience of being enslaved to sin and death, to pain and brokenness, and my need to be freed from that and taken out of darkness into light. But years later, God would help me see that Scripture from a whole new perspective.

I’d gone to seminary for my master of divinity degree and one day, as I came out of the cafeteria, there was a table set up in the hallway with a sign that grabbed my attention. It read, “Slavery is alive” and underneath it said, “Rape for profit must be stopped.”

That poster knocked the wind out of me. I didn’t know that slavery still existed in this world. Literal slavery, not merely poor working conditions, but actual human beings owned by other human beings, being held by violent force. I had never even imagined that there would be an entire industry that could be called “rape for profit.”

My first question was, What in the world can I possibly do? It was overwhelming for me, and part of me wanted to take that knowledge and put it back on a shelf and forget about it. Yet while I wanted to turn away, I knew I couldn’t. I wasn’t sure how this connected with what I thought I was supposed to do with my life, but I couldn’t get it off my mind or my heart.

To Loose the Chains of Injustice

Then God brought me to Isaiah 58 yet again, giving me a new understanding of everything he’d been doing all along. God helped me see that my newfound passion for justice and for bringing freedom to victims of human trafficking was actually directly in line with who he has always been from the very beginning of time.

Is not this the kind of fasting I have chosen:

to loose the chains of injustice

and untie the cords of the yoke,

to set the oppressed free

and break every yoke?

Is it not to share your food with the hungry

and to provide the poor wanderer with shelter—

when you see the naked, to clothe them,

and not to turn away from your own flesh and blood? (NIV).

I realized that in Isaiah 58 there is both spiritual freedom and literal freedom. There are people in our world today, just as there were in the prophet Isaiah’s time, who are in actual physical bondage. For me, Isaiah 58 became a way of understanding the gospel in an even fuller way than I had previously understood.

From that point forward, I began to sense that the call I had on my life to serve the church was gaining specificity—God was calling me to serve by helping others understand his passion for justice. Justice begins in the very heart of God. It’s been there since the very beginning of Creation, and it extends all the way to the day when all things will be made new. His passion for justice is all over Scripture and the more you open your eyes to it, the more overwhelming it becomes to see how pervasive it is—how central it is in the heart of God and the future that he is bringing for his kingdom.

In the church, we can easily be distracted by political divisions, especially in terms of “justice.” But in these matters we don’t need to be distracted by divisive politics. We need to untangle our understanding of biblical justice from positions of “right” or “left.” The real conversation about justice begins with who God is and with seeing in Scripture all the ways that God calls us to serve those who are vulnerable or who endure violence by others’ abuse of power.

Biblically speaking, justice is essentially a right ordering of power. But even beyond setting wrongs right, justice is a use of power that enables others to flourish in the abundance that God created them to experience. If you think of God’s original desire in creating human beings and everything that he has wanted to lavish upon us—knowing his love, giving his love to others, total freedom and abundance—justice is what enables that flourishing of love, of freedom, and of being who God has made us to be.

Injustice, on the other hand, is a stripping away of all of that. It’s an abuse of power that takes from others the very things that God has given them to make them human. It’s not simply taking away luxuries or extras—it’s taking away freedom and human dignity. Ultimately, justice is who God is—and what he’s about in this world.

Consider Isaiah 1 in which God spoke to the people of Israel about all the ways that their worship had become detestable to him. Through Isaiah, God said, “When you spread out your hands in prayer, I hide my eyes from you; even when you offer many prayers, I am not listening. Your hands are full of blood!” (verse 15). The blood on their hands refers to all of the wrong being committed by the people of Israel against the vulnerable and their failure to stop the wrongs they were witnessing. God clearly tells them what to do: “Learn to do right; seek justice. Defend the oppressed. Take up the cause of the fatherless; plead the case of the widow” (verse 17).

Immediately following is one of the most well-known verses in the Christian faith: “Though your sins are like scarlet, they shall be as white as snow; though they are red as crimson, they shall be like wool” (verse 18).

This is an incredibly powerful image that’s rightfully used to help us understand our reconciliation in Jesus: the washing away of our sins by the blood of the Lamb, and being made white as snow. But we must also remember and live out this verse’s original context: God calling his people to do justice because he is the God who loves justice.

Bethany Hanke Hoang is a TCW advisor and is Founding Director and Special Advisor for the International Justice Mission's Institute for Biblical Justice. You can follow Bethany on Twitter at @Bethanyhoang.