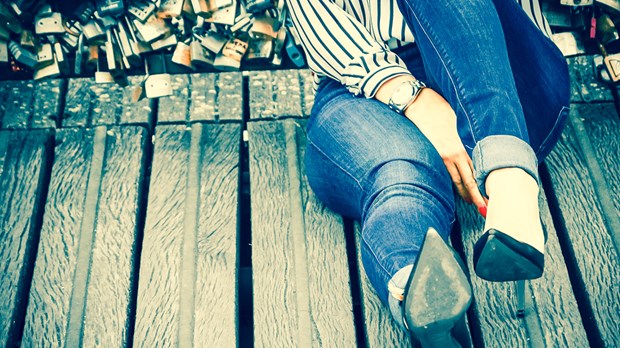 I'm not entirely sure when the questions stopped, but at some point they did. For years I would come home from college or from living far away and would encounter well-meaning family and friends who would ask the inevitable, “So, are you seeing anyone?” When I would shake my head, a follow-up would soon come: “Well, you've got plenty of time. Don't worry about it.”

But then I realized people stopped asking the question.

If I had things my way, I would be married by now. I would have a whole passel of children, probably a dog or two, and my life would be utter chaos. Glorious, beautiful, sacrificial chaos. Much to my dismay, the Lord didn't ordain my twenties to be full of those things. To the church I can seem selfish and foolish as I shirk the responsibilities of a family to travel and explore my own interests. To secular society I can seem pretty crazy—instead of embracing my freedom I can only long for the family I don’t have.

Singled Out in Church

Now, keep in mind I'm only 28. According to an article in the Huffington Post, I’m just slightly older than the average age most women marry for the first time. But somehow in the church I'm viewed as two cats short of spinsterhood, at least this is the impression I get every time I sneak into the end of a pew.

I know the stigma that singles have in the church because I used to encourage it. When I was a young 20something, I vividly remember labeling a group as “single for a reason, not single for a season.” But now, as a single adult who is neither desperate nor broken beyond repair, it frustrates me to think I might be written off into either of those categories. Sometimes there’s just not a reason.

The church looks at me with concern, nervous about how old I'm getting, thinking that I'm probably getting more set in my ways (ways which might be a deal breaker for someone I might start dating). All of the women tittering in the back of Sunday school are nervous the younger, prettier, less opinionated women coming behind me are going to catch the attention of any single men who might be left.

In fact, one week after I had gone through a terrible breakup, my sweet grandmother called me to offer part of her own story: a broken engagement and heartbreak but the inevitable meeting of my grandfather and their love story that lasted more than 50 years. In true Betty fashion, she concluded with the statement, "Well, Rachel, it's time to get back on the horse and put yourself out there. You aren't getting any younger."

But is this really the solution? If we're doing it right, Christian society should be this awkward mix of living in the world but not of the world. Dating and marriage seem to fall into one of those incredibly frustrating categories that dances between the two realms. So why can’t we strike the right balance when viewing and discussing singleness?

Doing Battle with the World

My whole life I have had one secret answer when asked, “What do you want to be when you grow up?” A wife and a mom.

Maybe it’s because I was raised by such an incredible woman or because the Lord hardwired this desire in my heart, or maybe I just watched Yours, Mine, and Ours too many times. Whatever the reason, those desires have only increased as I’ve grown up. But recently I started to notice my answer of being a wife and mother is no longer acceptable. I need to have a real career. I need to decide how I am going to provide for myself. I need to climb the corporate ladder. I need to be all of these things that I have no desire to be or else risk insulting the struggle of my fellow sisters.

But let me tell you, it’s exhausting to live in a closet, putting on a more professional, independent air when all I really want is to admit my desire to be a housewife. I actually want to change dirty diapers and clean scraped knees and bring juice boxes and orange slices to my kids’ soccer games.

But in truth, neither one of these stereotypes is fair.

Walking Both Sides of the Fence

Hear me when I say that I battle my fears of getting older and more desperate. I feel the years as they pass. I see my friends get married, have a baby, have another baby, and start to raise their children. I know the depth of longing to have my own husband and family. I am aware of my quirks, how I like the toilet paper to be a certain way, and how I despise to take out the trash. I have no blinders to reality.

However, for the past seven years I have lived a huge, full life because of my singleness. My mom didn't finish college until after she had kids, and I finished at 21. I worked in my dream job. I’ve traveled the world. I’ve held babies in Africa and Asia and Central America. I've moved across the United States several times. I've walked through deep sorrow and sadness and confusing times without a spouse. I’ve provided for myself. I've learned that I am strong and brave and capable.

Through this process of learning who I am and what I have to offer, I've come to be a better woman, friend, sister, daughter, and follower of Christ. The gifts, talents, and passions God has given me make me a force to be reckoned with for the Kingdom. I am growing in my understanding of what my place is in this world. I embrace my strengths and acknowledge my weaknesses. All of these things will make me a better wife and mother if that is what the Lord has for my life.

As I get older, I am less likely to settle for someone who doesn't have the same calling on his life. Is my deepest desire to be a wife and mother? Yes. Do I want those things more than I want to be a woman who loves Jesus more than she loves herself? No.

So being single at 28 doesn't mean I'm desperate, but it does mean that I'm choosing to sacrifice my desires for God’s desires and plan. At the end of my life I want to hear the words, “Well done, my good and faithful servant” whispered in my ears—even when that means surrendering my deepest desires.

Rachel Mueller is a 20something who blogs about life, love, her misadventures in dating, and how to find Jesus in the middle of it. She can be found at RachelMueller.net or tweeting at @rachelmueller.