The most dangerous place in the world wrecked my heart and soul.
Joy Beth Smith 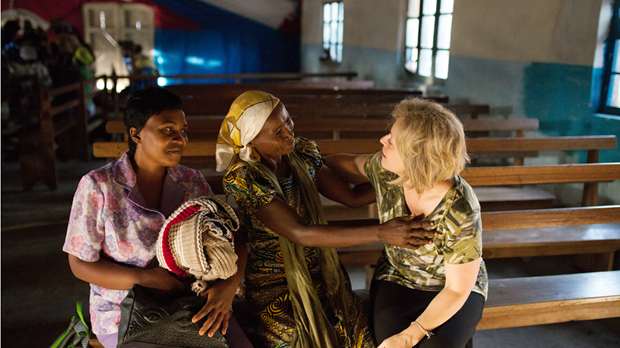 When I was asked to travel with One Million Thumbprints to the heart of Africa—the Democratic Republic of the Congo—I had no idea what to expect. Two months before my trip, I had very little detailed knowledge of Africa, and now I was preparing to travel alongside fourteen women into a literal war zone.

Despite reading travel books and missionary blogs, I think my underlying naiveté helped me in many ways. While a few of the women in our team rightly feared for their safety and knew the dangers we were facing, I remained unaware of the extent of hostile activity and lawlessness that defines this region. Initially I viewed this trip as a grand adventure—that was until we had to hire armed guards to escort us through the more dangerous parts of Congo.

The first day we were traveling from Goma, I saw a jeep full of men closely tailing our van, and I began to get very, very nervous. “Why are they following us?” I asked one of the translators.

“Don’t worry,” she said. “They’re with us. They’re our protection.”

It was protection I didn’t know I needed—protection that would keep me safe from the harm I couldn’t see or understand. To me, these men with their guns hoisted on one shoulder and rounds of ammunition strapped across their chests were the enemy, but in reality, they were thwarting the threat.

A few nights later, I truly felt the effects of being in Congo. Three of us were debriefing from the day, sharing our bug bites and woes, when I heard a series of gunshots in quick succession, sounding uncomfortably close.

“That’s nice,” I said as a way to disguise my anxiety. “Someone’s shooting off fireworks.”

We all knew it wasn’t fireworks. And we also knew that if the gated compound we were staying in was raided, we’d be vulnerable to attack. We were essentially defenseless, apart from a few UN officials and a couple of cans of bug repellant.

Despite my words, I couldn’t pretend it was fireworks. I couldn’t close my eyes to the threat around us, and I couldn’t push away the fear and doubt that I had to wrestle with as a result. This was a dangerous place, and I, as a foreigner and especially as a woman, was vulnerable here.

Living in the War Zone

Four days later, I had the chance to leave. I would cross the border of Congo back into Rwanda and take a plane to the Tanzanian airport where my team embarked on the climb of a lifetime: summiting Mt. Kilimanjaro.

But behind us we left dozens of women whose stories we’d heard. We left hundreds of women whose programs we saw in action. We left thousands of women who are far more vulnerable on a daily basis than I felt during that single night in the compound. There is no armed guard protecting them. There are no UN officials who could send out a call for help. Some don’t even have locks on their doors to keep threats at bay. And none of this is acceptable.

Recently a tweet by John Piper has been making the rounds on social media: “Occasionally weep deeply over the life you hoped would be. Grieve the losses. Then wash your face. Trust God. And embrace the life you have.” This quote sounds so beautiful, and the first time I read it, I nodded my head emphatically. Yes! Accept the life you have, accept the life God has given you, and surrender those dreams that may never be. There is important spiritual truth here.

But what if your life is one filled with trauma, abuse, isolation, and despair? Should you still “embrace” that life? Should you not grieve daily, longing for justice and grace and mercy? While Piper’s sentiment sounds universal, it’s only fitting for the one percent of us; it’s a lovely phrase that reveals far more privilege than compassion.

From 1998 to 2003, Congo endured a five-year war (often referred to as “Africa’s World War”) that resulted in the death of almost six million Congolese citizens. This grave loss only caused further political and humanitarian crises for the DRC. With 30,000 child soldiers enlisted in both military and militia ranks, even the youngest in the nation are suffering. The political infrastructure is precarious at best with M23, a violent rebel group, actively working to overthrow the Congolese government. Their weapon of choice to destabilize an entire nation? Rape, a tool that will punish women, humiliate men, and tear apart the very fabric of the society.

With seven out of ten Congolese women experiencing this gender-based violence, Congo was named the most dangerous place in the world to be a woman. As I listened to the stories of the women I met, my heart broke for this nation—for mothers and daughters who are raped by the same band of rebels, for the young girls who are violently abused because men believe they can cleanse themselves of AIDS by raping a virgin. In addition to sexual trauma, women who’ve been raped are often cast aside, ostracized from their villages, and they frequently suffer from serious or life-threatening medical complications.

I don’t think God means for those who are brutally raped simply because they are women to be thankful for the life they have. I don’t think God intends for women who have had to sacrifice their education, health, and community as a result of sexual violence to simply wash their faces and accept it all.

Should these women simply embrace the life they have? What a tragedy that would be—for them to give up all hope that they can live a full, satisfying life that isn’t saturated with fear and shame! These women deserve our tears and our grief—and they deserve our action.

Fighting for the Women

During my trip, I was able to see the programs operating on behalf of victims of gender-based violence in these war zones, and though I was initially skeptical, there is good and effective work being done. It’s kingdom work. It’s work that treats women as equals, not simply victims, and it’s work that focuses on restoring human dignity through medical care, financial savings opportunities, and peacemaking. It’s work that is literally saving lives and making a difference in the world. It’s work that I didn’t know existed and now I can’t ignore.

There are programs on the ground in Congo, Syria, Iraq, Rwanda, and other war-torn regions that are working to protect women. They are working to bring peace back to countries ravaged by fighting, famine, and fear. I wish everyone could spend a week alongside these women, witnessing their strength, seeing that piece of imago Dei shining so brightly and beautifully through their tears of joy and sorrow. I wish you could hear their songs as they welcome you into their villages, and I wish you could feel their hospitality as if it were a tangible, physical gift they were presenting.

My week in a war zone changed me. I can’t ignore the need I’ve seen—the sisters I met who desperately require resources, education, and advocates who will fight on their behalf. The safety and security I take for granted every single day are rights that they are not afforded. I live a life of excess: I have every need met, and every want is considered. I can apply for dream jobs and debate the merits of a new summer wardrobe while there are Congolese women who change their lives and the lives of their children with a $30 loan to start a secondhand clothing business. What am I doing with my one wild and precious life if not spending it for the sake of others?

These women are waging war every single day to simply survive, and I am joining my ranks with theirs. I am standing beside all the mommas from those villages, and I am telling the world that enough is enough. We cannot accept this. We cannot embrace it. We cannot ignore it. And we cannot make progress on our own.

If you’re interested in learning more about how you can help women in war zones, check out OneMillionThumbprints.org or connect with them on Facebook or Twitter.