We are all—together—the fullest representation of God.
Austin Channing Brown 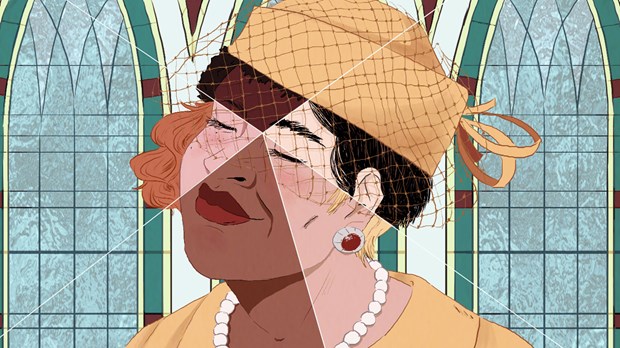 I was nine years old when I walked into the old brick church the color of cloudy skies. Like a shy duckling, I followed my father into the building and through the hallways. Kind faces greeted us as we walked by, as if we were all old friends. The closer we got to the sanctuary, the brighter the hallway became. Finally, standing before open double doors, sunlight poured around our feet, beaming through tall stained glass windows. Pews anchored in neat rows, solid and strong, were filled with families clapping with the drums. Ushers stood at attention using gloved hand signals to guide us to a seat. My eyes were glued to the front of the church where a choir swayed back and forth to the music emanating from a stout, electric organ. It was like nothing I had ever seen before. As I tried to take it all in, it quickly became apparent that my father had brought us to a black church. It was love at first sight.

I don’t know if you’ve ever had this feeling. It’s what happens when there’s an overwhelming sense of belonging. Perhaps you’ve experienced this when visiting a church too. Or maybe your sense of belonging happened in a small group or Bible study, a volunteer opportunity or shared meal with friends. I imagine for you, like me, this memory comes with strong feelings of nostalgia. We know it couldn’t have been as perfect as we remember, and yet the sweetness of the moment is all that matters. Whatever imperfections existed in reality—a choir member singing off-key, someone upset we stole “their seat,” or any of a thousand things that could go wrong in a church service—were of no importance to me then or now. All I remember is feeling at home.

The truth is church was nothing new to me. Having attended a Christian school for as long as I can remember, I had sat through countless chapels and church services. But the two experiences were difficult to compare. When I walked into that church, for the very first time, I was surrounded by people who looked like me. It’s hard to express how much this moment changed everything.

In the late ’80s and early ’90s when I grew up attending a predominantly white private school, words like diversity and multiculturalism had not yet been popularized. So schools were still developing curriculum and experiences largely devoid of cultural depth. In my experience, all of my teachers were white, as were the principal, librarian, and other staff members. We regularly used illustrated Bibles, storybooks, and movies in which all the characters were also white. When teachers posted pictures of Jesus in the room, Jesus was always depicted as white. Our chapel services always had a white speaker who used cultural references with which I was familiar only because of my white peers, not because the references actually applied to my home or family life.

Much of my school experience was devoid of representations that showed I mattered—in the curriculum, in the images, in the leadership. It was assumed that whiteness was universal and that nothing was lost by not representing bodies like mine. While I never doubted that the adults in my life cared for me, it seemed to me that they believed white bodies where somehow more representative of the Divine than mine ever could be. And though I couldn’t have articulated it at the time, it left me feeling devalued as a whole person made in the image of God.

And so began for me what Howard Thurman refers to as “imitation” in Jesus and the Disinherited:

The aim of such an attitude is to assimilate the culture and the social behavior-pattern of the dominant group. It is the profound capitulation to the powerful, because it means the yielding of oneself to that which, deep within, one recognizes as being unworthy. It makes for a strategic loss of self-respect.

If you’ve ever been in a place where you felt a profound sense of not belonging, you likely understand this definition all too well. In these moments of imitation, we find ourselves slowly casting off who we truly are in an effort to blend in, to be accepted, to belong. The same was true of me, even as a child. Did I need to assimilate—to lose or diminish who I was as a black female—in order to be part of the faith culture I lived within? How could I understand what it meant to be made in the image of God when I felt so disconnected and unseen?

Have you ever participated in conversations about race at church and had someone use Galatians 3:28 as reasoning for ignoring racial differences? This verse reads, “There is no longer Jew or Gentile, slave or free, male and female. For you are all one in Christ Jesus.” It’s often interpreted as proof that racial differences can and should be minimized in order to live into the truth that we are “one in Christ Jesus.” However, when this lens is used, the result often means minimizing the representation of other cultures and instead relying on the predominate culture. Doing so minimizes not only the importance of the identities of members but also the inherent diversity of the imago dei, which Miroslav Volf speaks of in Exclusion and Embrace: “Baptism into Christ creates a people as the differentiated body of Christ. Bodily inscribed differences are brought together, not removed.”

When I stepped into that black church as a nine-year-old girl, my “inscribed difference” that I’d been working so hard to minimize finally moved from being theoretically important to God to becoming intrinsic to my understanding of being a member of the body of Christ and a bearer of the imago dei. As I worshiped with other believers that day, I received an amazing gift: I began to see in a deep and profound way that I, as a black girl, was indeed made in God’s image.

This church that amazed me became our church home. Though I recognize not all black churches are the same, there are four ways this particular church gave this gift to me.

1. Black women were revered. In our church there are elderly women known collectively as the “church mothers.” They often sat in the front row, purses filled with peppermint candies, hats sitting high while lap scarves hung low. To be considered a church mother conferred importance and respect. We took great pride in enjoying their wisdom, humor, and love.

2. Black women led. Seeing women lead in every area of the church gave me joy. Black women created Bible studies and youth ministries. They orchestrated the choir and the usher board. They nursed members through emotional church services and personal losses. Every Sunday I saw the great giftedness and excellence of black women in leadership.

3. Black women preached. Passionate voices radiated through the microphones as black women molded sermons around our lives, forming cradles of words to carry us through the week. These women preached with boldness and clarity, moving us from the margins of society to the center of God’s care and love.

4. I could see myself. Black culture was infused into every aspect of the service. The preacher talked the same way my parents did at home. The songs the choir sang were the same songs we played in the car to and from school. The references in sermons and Bible studies, programs and speeches, were filled with black history and contemporary culture. This church gave meaning and credibility to the ways I understood the world. My school had always taught me that God could see me, but the black church taught me that God also understood me as a black woman.

The black church (or any other church) is not all perfection, of course. The church I attended as a child was filled with people—and therefore it was filled with brokenness. But I’m okay holding all of its brokenness in tension with the gift it gave me. This church fought against the disregard and minimization of my body I experienced in other settings. It countered the overwhelming number of images that depicted exclusively white people as beautiful, smart, excelling humans who solely represented God and were represented by God. Never focusing on hate, the church was all about loving its members, from the infant to the elderly. We processed our experience of the world together, trying to make sense of our daily lives and the promises of God. Never shying away from issues of suffering among us, we always walked away with hope.

I haven’t attended a black church in a number of years, and I really miss it. But I carry with me, into every church I’ve attended since, this gift of truly believing I am created in the image of God. And this is a gift that keeps giving because it has helped me realize how special—how gifted—other ethnicities, languages, and cultures are to the church. I delight in learning from the global family of God just how rich the Creator’s diversity is. This diversity doesn’t require us to melt away, but it instead invites our full participation just as God made us.

We are all—together—the fullest representation of God when we allow our ethnic, lingual, and cultural differences to be celebrated. We can learn about the Creator and ourselves when we don’t just profess that we are all created in the image of God but when we begin to reflect this belief onto one another.