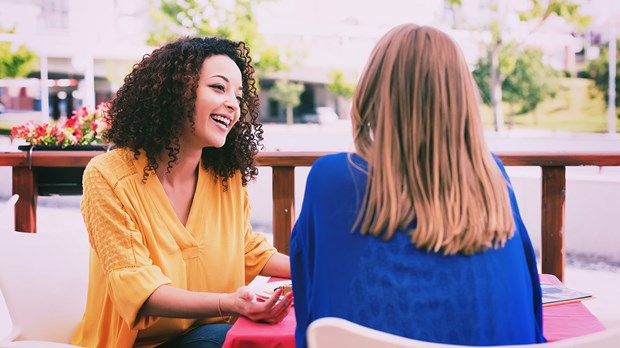 For a long time, I’ve had an uneasy understanding of what it means to share the gospel. Being concerned only with the message—that is, being quick to mention Jesus and to point out sin when I saw it—left me feeling like a clumsy, jerky clod. On the other hand, focusing solely on avoiding awkwardness by sidestepping controversial topics such as God and sin made me feel like a coward, more concerned about my own comfort than the eternal well-being of others.

The balance point of effective, genuine witnessing eluded me. How do you speak honestly without alienating the listener? How can you be relatable and sensitive without sacrificing the truth—which often offends?

While struggling to reach this balance, I’ve found the Book of Acts to be eye opening. Here, the saving message Jesus first trusted to an intimate group began to spread, as per his instructions: “You will be my witnesses, telling people about me everywhere—in Jerusalem, throughout Judea, in Samaria, and to the ends of the earth” (Acts 1:8). One fine example of this is Paul’s ministry in Athens (Acts 17:16–32).

Paul did not go to Athens based on his own plans or timing. Opponents of the gospel were chasing him and his fellow evangelists from city to city, agitating crowds and inciting animosity as they preached. Fellow believers brought Paul to Athens so that Silas and Timothy could join him.

In the meantime, he was troubled to find the Athenians steeped in idolatry and eager to entertain any spiritual ideas that piqued their interest. Paul reasoned with residents there and was eventually invited to speak to a group of people meeting at the Areopagus, the place where new ideas were vetted.

Paul’s methods there are somewhat surprising but also instructional on how to share the gospel effectively in our own culture. Here are some of the most helpful principles to be gained from his teaching.

Learn about your listeners, and show them sensitivity and respect. As Paul started speaking to the crowd, he acknowledged their own value system: “Men of Athens, I notice that you are very religious in every way, for as I was walking along I saw your many shrines” (17:22–23).

Wait, he saw that they were “very religious”? He saw their “many shrines”? Just a few verses earlier, we find that Paul was “deeply troubled” by their pagan lifestyle (17:16). It’s almost surprising that Paul didn’t start with a truth-in-love style denouncement of their idolatry.

But Paul understood that such an approach would only shut down any hearing he had gained with them. Paul wasn’t shying away from addressing sin; he simply knew that there was an effective and an ineffective way to do this. He opted to show respect for his listeners and sensitivity toward what was important to them.

2. Begin with the Familiar

Start with what they do know rather than what they don’t. At this point, the Athenians had no basis for recognizing their worship as sinful. But they did understand what it means to be zealous for spiritual things, and it was to this religious zeal Paul first appealed.

The very existence of an altar “To an Unknown God” (17:23) showed that the Athenians were open to the likelihood of there being more out there than what they knew, and Paul used this opportunity to tell them about a God—the God—whom they’d not yet known. He provided them with a starting point from their own culture for understanding what was otherwise unknown to them.

3. Present a Correct Picture of God

Speak accurately and winsomely about God. At the root, the Athenians’ idolatry stemmed from an inaccurate—even reversed—understanding of God and his nature.

They were perhaps willing to add Paul’s strange, new god to their collection, yet Paul promoted a God who requires exclusivity (see Exodus 20:1–6). They served gods created by their own hands, but Paul spoke of the one true God who “made the world and everything in it” (Acts 17:24). Their religious system could not exist without the work they’d done, but the living God does not rely on human hands because “he himself gives life and breath to everything, and he satisfies every need,” and “he decided beforehand when they should rise and fall, and he determined their boundaries” (17:25, 26).

God is more powerful, majestic, and sovereign than the Athenians could imagine—yet also closer and more intimate. This all-powerful God has done all of this so that people might “perhaps feel their way toward him and find him—though he is not far from any one of us” (17:27). This is far beyond the scope of relationship one could have with a mere idol.

Seeing the truth—and speaking to those who don’t yet see it—can estrange two parties. But Paul did not take the condescending posture of one who is superior to his listeners.

Rather than highlighting the disparities in their beliefs, Paul used an understanding of their culture to help them find common ground—in this case, by quoting poets’ lines about the Creator: “For in him we live and move and exist,” and “We are his offspring” (17:28). The classic poets would have been widely known and revered by the Athenians. Interestingly enough, the second of these lines is taken from the poet Cleanthes’ “Hymn to Zeus,” an unlikely source for Paul to use in familiarizing them with the true nature of God. Like Paul, we may be able to find common ground and build connection even in surprising ways.

Be prepared to disarmingly but truthfully point out the fallacy of sin, along with the need for repentance. Paul drew the logical conclusion from what had been established: Of course God is not an idol, and to worship this way is misguided—and perilous. He kept this line of reasoning blessedly free of emotionally charged words of condemnation, but he was clear, accurate, and urgent in his message.

Paul achieved this in part by making the summons to correct understanding and worship of God corporate rather than personal: “We shouldn’t think of God as an idol designed by craftsmen from gold or silver or stone” (17:29, emphasis added). Further, Paul made clear that God used to excuse this kind of thinking, but things have changed and he now calls all to amend their erroneous ways.

Paul stressed that changing course was necessary. Where the path to restoration with God had once been closed, a way has been made (John 3:16), and it has been opened to all people (Romans 10:12–13)—but the time is limited. Paul’s message culminated with the truth that this way is through Jesus, as proven by his resurrection—which, unsurprisingly, drew a mixed reaction from the crowd.

6. Be Ready in All Situations

Paul was in Athens in a period of waiting, and, given the circumstances that brought him there, possibly also a place of frustration or disappointment. But he made wise use of every chance to share the gospel. He didn’t wait until he was back in his comfort zone or when the opportunity to witness was the kind he hoped for.

Paul engaged people in the synagogue, in the market place, and in the meeting at the Areopagus. He spoke to those who already feared God but didn’t yet know Jesus, to Epicurean and Stoic philosophers without any acquaintance with Yahweh, and to Athenian citizens and foreigners alike. Notice that Paul spoke to those who wanted to engage, and he knew when it was time to leave. He spoke the truth, but he also took pains to provide them with every opportunity to understand and receive that truth.

These days I interact differently with those whom I hope to share my faith. I make more intentional efforts to not just know but also understand their worldviews, and I notice aspects of the gospel that they may already identify with. I wait for the Spirit to reveal more logical, organic opportunities to discuss weighty issues, such as the existence of God, rather than taking the first awkward one that pops up. I’m not a witnessing superstar, but I’m now confident that being true to the message and sensitive to the listener are not mutually exclusive goals.

In the end, some responded favorably to Paul’s message, asking to hear more and even accepting the gospel truth. Others rejected it. We all want to witness effectively, and we should make every effort to do so. Yet no matter what we do, there will always be some who scoff and turn away. If we keep our hearts both soft and true, we will help others receive the truth rather than contributing to their rejection of it.

Arianne Benedetto lives in Portland, Oregon, with her husband, Anthony, and four children. She is passionate about learning and meditating on Scripture to guide how we think about and act upon our faith.