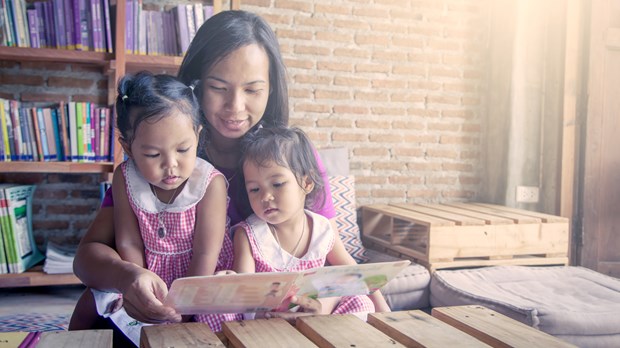 My friend from church, Lindsey, has two children, Bea and Harvey; they have different dads, and she’s not married to either of them. If that sentence made you balk, you are not alone.

For many people, Christianity calls to mind a certain progressive order of things. We go to high school, then college where we meet our beaus. We graduate, get married, get a house and then perhaps a dog; and then we have babies—that’s when we have a family.

Christians who progress through life in that order typically receive lots of support, are showered with gifts, and feel the nodding approval of their churches and communities. Those who stray from that order can become easy targets for stinging criticism and, worse yet, the blame for society’s failings.

The Road to Single Parenting

Lindsey is smart and works for the governor of her state. She made some choices for herself, and life made others. Bea was born when Lindsey was 19 and trying to escape an uncomfortable home setting. Lindsey tried to make it work with Bea’s father, but he ultimately wanted no part in forming a family.

The poor treatment Lindsey received from Bea’s father, his family, and their lawyer broke her naivety. Yet she, like single parents everywhere, still hoped to find someone who would love her with a solid, lifelong sort of love.

Lindsey was engaged to Harvey’s father when she became pregnant again, and before long she began to see the darker parts of his personality. “His bad moods were always directed toward me and never Bea, so I thought, Well, that’s not so bad. Maybe I can handle this. It’s better than the isolation I had before and having to always doubt myself.”

It wasn’t better, however, and the relationship with Harvey’s father unraveled soon after his birth. Lindsey is now a single working mother of two children. And she is not alone.

There Are Lots of Lindseys

Lindsey represents a large and fast-growing demographic in American society: the single parent. Approximately 1 in every 27 Americans is a single parent, and 83 percent of the nearly 12 million single parents are women.

Yet single parenting, though it has become more prevalent in the 21st century, is not a new phenomenon. Single mothers are mentioned in the Bible, many of them widows. To lose a husband in biblical times was a massive blow to a woman’s social and economic standing.

All single parents face a significant challenge. Raising children is exhausting work even when partnered with a spouse. The responsibility of earning an income, leading a household, parenting, and, for some, continuing education, can be truly overwhelming.

It’s no wonder God issued a special command concerning their treatment by society: “You must not exploit a widow or an orphan. If you exploit them in any way and they cry out to me, then I will certainly hear their cry” (Exodus 22:22–23).

One of the best-known single moms in history is Hagar, whose story is told in Genesis 16 and 21:8–21. Her status as a single mother—who experienced social stigmatization perhaps even worse than many single moms today—is what makes Hagar’s story so blindingly beautiful and brave.

Hagar was the servant of Sarah, the wife of Abraham. After an ill-advised plan for childless Sarah to become a mother by her husband’s liaison with Hagar, she gave birth to Ishmael. Sarah soon became jealous and told Abraham to send her former servant and their child packing.

We later see Hagar and Ishmael in the desert of Beersheba, weak, helpless, and waiting for death. Hagar was alone with her boy. She had no extended family, no partner, no support network. What little she could offer her son was not enough. She had given up all hope. “But God heard the boy crying, and the angel of God called to Hagar from heaven” (Genesis 21:17).

Here is God’s concern for single parents and their children in action. God provided water for Hagar and Ishmael, and the promise that he would not only survive but also become the father of a great nation (Genesis 21:18–19). Hagar and her son had been written off and abandoned by others—but not by God.

We don’t see miracles of the kind Hagar saw quite so often these days. That could be because Jesus commissioned us to love each other just as he has loved us (John 13:34). Perhaps God hopes we will make ourselves available to single parents who, like Hagar, have been cast out by others and have exhausted their resources.

Of the 9.9 million women who are single parents, 50 percent are employed full time. Sadly, these women earn far less than men, about 78 percent of what their male counterparts earn. For African American women, that number is just 56 percent as much as men, and for Hispanic women only 56 percent.

As recently as 2013 the average annual income for a single mother was $26,000 compared to $84,000 for employed married women. And so single mothers continue to fear for their children’s welfare, just as Hagar did. They worry about childcare, health coverage, food provision, and keeping their families together—to say nothing of the usual parental anxieties of working guilt and financial stress.

A study by the Pew Research Center found that 70 percent of the general public think single mothers raising children is bad for society. The study did not specify whether public concern represented concern for the plight of the women or disdain for them as a cause of society’s ills. Single mothers have been demonized as lazy, irresponsible, welfare cheats, and more.

It’s no wonder many single mothers are uncomfortable with that label. Most are hardworking parents, the same as any other, who struggle to create a home and future for their children, yet they are often stigmatized as “the problem” with our society.

Jesse Viehe is a private contractor. He’s also a single dad. He shares custody with his former partner, Keri, of their eight-year-old daughter, Davi. He knows he’s lucky because many men are excluded from their children’s lives when things go sour with an ex. “There are a ton of men who want more time [with their kids] but don’t have the option,” Jesse says.

There has been a slow and steady growth in the numbers of single fathers from 300,000 in 1960 to 2.6 million in 2011. Single fathers are the minority of single parents, but their struggle is no less real. Their battles look different, such as being barred from access to play dates or parents groups, or denied communication with their children. And both the courts and society nearly always side with the mother against the father in any dispute involving children.

What All Parents Want

Family in America is not what it was in the 1950s or even in the 1980s. Parenting now comes in many different forms but always with the same hope. Single mom Eleni, whose husband died just before their son was born, speaks for all parents when she says, “I just want him [my son] to be happy, to be complete.”

Eleni’s wish goes to the core of parenting. We all want healthy, happy, balanced children.

Genesis 21:21 tells us that Hagar and Ishmael made it. God stayed with Ishmael as he grew up, and he became an archer and married a woman from Egypt. Sadly, however, though Ishmael lived to a ripe old age, the rift between him and the family of Abraham and Sarah was never healed. Ishmael’s descendants continued to live in hostility toward those around them (see Genesis 25:12–18).

That doesn’t have to be the case for single parents and their kids today. We have the opportunity to help single-parent families thrive and erase the social stigma that they still face. By showing love to single parents and their children, welcoming them into the church, and offering them the same support and affirmation we would to two-parent families, we fulfill both the command of Christ and the biblical injunction to care for single mothers.

Erina Ludwig is a British writer living in Indianapolis and is learning the true meaning of community in her adopted home. Erina is the author of Unnoticed Neighbors, she plays in the band The Yellow Kites with her husband, and is the proud mother of her daughter, Juniper Rose. You can find her on Twitter at @erinaludwig and on ErinaLudwig.com.