Don’t be afraid to pull the plug on destructive relationships.
Brittany Bergman and Joy Beth Smith 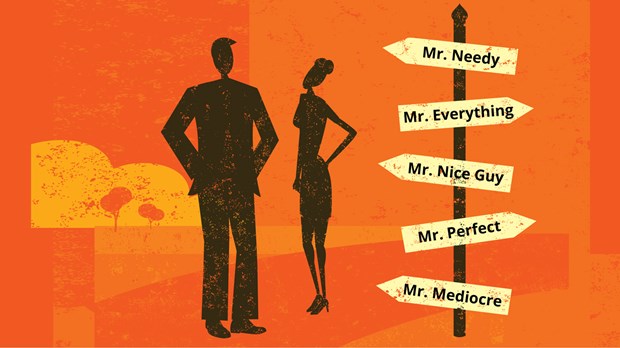 Finding a spouse who’s a good fit can feel impossible in our world of high standards, fairy-tale romances, and well-intentioned but unrealistic stories of love at first sight. In reality, it takes a great deal of wisdom, patience, and often many first dates with the wrong guys before we find the right one.

But why are some of those wrong guys just so tempting? They lure you in with their Hollywood good looks or their passionate talk about C. S. Lewis, and suddenly you realize that you’ve fallen for exactly the kind of guy your momma warned you about. Sometimes, the guy we need least is the one we’re attracted to most.

If you like ice cream, he’s drinking coffee. If you’re for the Cubs, he’s cheering on the White Sox. You’re drawn to him because he’s so different. But is that necessarily a good thing? We can't underestimate the power of a relationship founded on commonalities instead of differences. It can be exciting to get into those heated debates and have him introduce you to music and movies you’d never pick up, but it’s wise to marry someone who complements you as well, especially in personality traits like introversion/extroversion and communication styles. Yes, some push back and challenge is healthy. But if you have opposing views on critical issues such as faith or whether to have children, it will be difficult to find unity in your marriage and make wise decisions about your future.

You never doubt how much this guy loves you. He texts you. He calls. He wakes you up in the middle of the night just to chat. He requires a lot of attention, but you think it’s kind of cute how much he needs you and values your advice. While this guy makes you feel good initially, he definitely offers some long-term problems. Though you wouldn’t want to be with someone who has his life totally figured out, a guy shouldn’t need you so much that the relationship becomes codependent. This situation is especially tricky when you’ve walked with him through some tough issues, like recovering from alcoholism or helping him deal with his parents’ divorce. It’s not that you can’t be supportive of someone who is humbly trying to grow, but if he needs you to an unhealthy degree, he will zap your ability to be independent and could even drag you down with him. If he needs more help than you can (or should) supply, you’re not doing him any favors by enabling him. You are to be a wife and helpmate but not a counselor.

He’s such a great guy, right? On paper, it all makes sense (and your mom loves him!). He’s kind and smart, and he balances your personality and puts up with your crazy. Even though you enjoy his company, you’re just not attracted to him. But the fact that he’s super nice makes it hard to let him go. Dating a great guy is not a bad thing, and a foundation of friendship is critical for a healthy marriage in the long-term. But you’re not looking for a roommate here; you’re looking for a husband. God created us as sexual beings, and sexual attraction to your mate is important! It is true that sexual desire can grow, and many people with no chemistry at the beginning of their friendships have fallen in love and become attracted to each other. But that desire should be there before marriage rather than hoping it appears afterward.

Just thinking about those biceps and that hair and those eyes literally takes your breath away. This guy makes for great decoration, but what about a husband? Most of us won’t admit to holding physical attraction higher than other important qualities in a man, but it’s just too easy to get wrapped up in the attraction while letting other important considerations fade into the background. Now, you should definitely find your man attractive, but if you don’t also find him to be wise and brave and of good character, you’re going to hit some snags once that lust-bubble bursts. Consider what we see the woman say in Song of Solomon: “His mouth is sweetness itself; he is desirable in every way. Such, O women of Jerusalem, is my lover, my friend” (5:16, emphasis added). This man is not only attractive to her, but he is also a trusted friend and partner. And if you don’t want someone to marry you just for your looks, maybe you should be seeking more than tall, dark, and handsome in your next husband.

This guy is it—your be all and end all. As soon as you start dating, you spend every single second together, and when you split company for small naps, you text incessantly. You’re so utterly wrapped up in each other that there’s not much room for anything else, especially since your friends don’treally get it. Classic romances are filled with these kinds of relationships: Romeo and Juliet, Heathcliff and Catherine, and Jess and Rory. It can feel empowering and enticing to be in a relationship that transcends the opinions of everyone else in our lives. But this is also incredibly risky. If your loved ones are unanimous in their lack of support for your relationship, maybe they’re seeing something you’re not. Ideally your mate should be pushing you toward community, not taking you away from it. If you find yourself isolated from friends and family just to be with this guy, maybe it’s time to find a new guy.

This is the guy you’ll always find closing his eyes and swaying to the music during worship, leading Bible study, volunteering in his free time, and cooking you dinner because he wants to serve you. He always texts back, never demands that you watch the game with him, and he even remembers your birthday. None of this is bad, but just remember that perfect guys don’t actually exist, and you can’t build a relationship on dreams. He may seem amazing in every way, but if he’s not sharing his humanity and struggles with you in humility, you’ll never be able to get to a place of intimacy with each other or with God. Being with a man who treats you well makes for great dates, but being with a man who also confesses sin and admits fault makes for a great marriage.

You see him at church, but he usually walks out during prayer and never stays to chat. He may drop in on a small group from time to time, but he doesn’t contribute much to the conversation. You know he owns a Bible, but you’ve never really seen him read it. I hate to break it to you (especially since this guy is filling so many seats in so many churches), but he is bad news. He may identify as a Christian and truly love God, but if he’s not committed to the body of Christ, there’s a problem. Even if he has valid complaints against the church, marrying someone who would rather critique and isolate than contribute and engage will likely lead to similar conflict-resolution issues in your relationship. Choose to pursue a relationship with someone who thoughtfully engages with you, shows that he values Christlike community, and is open to being part of a solution rather than stepping to the sidelines.

While we all know (or have fallen for) some of these guys in real life, it’s probably best to analyze our attraction before diving into relationships with one of them. So when you find yourself distracted by that outrageously attractive guy or getting goosebumps as that one guy leads prayer, just remember the important questions here: Why do you like him? What is he bringing to the relationship? How are the two of you glorifying God together?

Brittany Bergman is a TCW regular contributor as well as an assistant copyeditor at Tyndale House Publishers. You can connect with her on Twitter at @NestedNomad or read more at her blog TheNestedNomad.com. Joy Beth Smith is the assistant edtior for Today's Christian Woman. You can follow her on Twitter at @JBsTwoCents or Instagram at @jbstwocents or on her website JoyBethSmith.com.