Will your differences sabotage or strengthen your marriage?
Pam Farrel 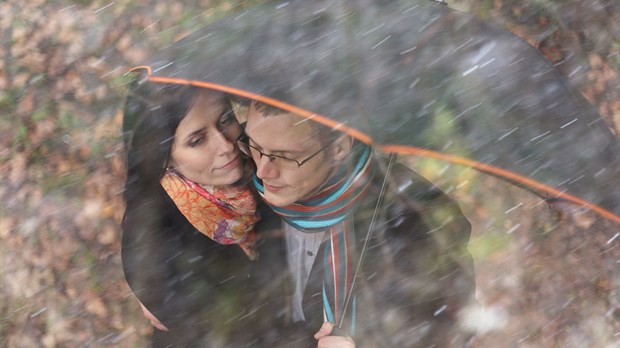 Recently, Bill and I were with a group of men and women as speakers for a relationship enrichment weekend. Over the few days we were together, we noted some comments from the group pointing out differences between men and women.

For example, one of the female leaders announced over the microphone, “I want to thank the men who helped women with their luggage as we were checking in. Chivalry is not dead!” Even though every woman in attendance clearly had the ability to transport her own luggage, many in the audience spontaneously cheered.

The men didn’t make any announcements, but I overheard one man saying to a group of friends, “The ladies here obviously spent more time thinking about what they were going to wear than we did. They look way better than any of us!”

Both of these people were making what may seem like an obvious observation: Men and women are different. Some gender differences are related to cultural norms, expectations, or even superficial stereotypes. Other gender-specific traits—such as biological characteristics or even psychological patterns—may be tied more closely to nature rather than nurture. Despite our differences, we have much in common, so one of the most important things men and women must do—particularly in marriage—is figure out how to understand and relate to one another.

Gender is God’s idea, as we see from the creation account: “So God created human beings in his own image. In the image of God he created them; male and female he created them (Genesis 1:27). This verse depicts our creation prior to sin entering the world, indicating that God intended the differences to be, like the rest of the created world, a good thing. In marriage, one of the keys to meshing our lives together is to recognize the inherent goodness in our differences and to truly “accept each other just as Christ has accepted you so that God will be given glory” (Romans 15:7).

We have a tendency to assert either that men are superior to women or that women are superior to men, as if deciding that one gender was best would somehow make life work better. In reality, both men and women have equal value. As men and women, we each have a contribution to make utilizing the unique physical, emotional, social, and spiritual traits God has chosen to give us.

“We do socialize our boys and girls differently, but the contribution of biology is not zero,” says Diane Halpern, a professor of psychology at Claremont McKenna College, who has been studying cognitive gender differences for 25 years. While debates about nature versus nurture and the impact of cultural expectations regarding gender will continue, research reveals some interesting differences between men and women that create a need to simply accept one another. Consider, for example, these biological and psychological differences between men and women and how they can impact our relationships:

This is one of the reasons so many good relationship memories are made over meals. Our bodies are designed to enhance relationships while we share food. One of our sons got married last year so I asked him what traits he saw in his bride that made him fall in love with her. He said, in part, “She makes great brownies! And she made them during finals week when were in the engineering shop twenty-four-seven. She is so thoughtful!”

The way we solve problems. When a man solves a problem, he tends to use one side of his brain. It may be either the right side or the left side, but he tends to stay on the side he started with until the problem is solved. In contrast, when a woman solves the same problem, she uses both sides of her brain at the same time.

This happens because women have more connections between the two sides of their brains than men do. This difference has a biological cause that happens in utero: When a male fetus is in the womb, a testosterone bath actually severs some of the connections between the two sides of the brain and sends out a signal to prevent other connections from developing. While our brains may function differently, studies show that men and women solve problems equally well—we just arrive at the conclusion via different paths.

In my experience, people tend to get angry with each other over traits they ought to admire. For instance, I conducted a survey with women in our ministry Love-Wise. One of the questions I asked was, “What do you appreciate most about men?” The most common response I received went something like this: “I love the fact that they can shut down their emotions to deal with a crisis, especially if it is my crisis.”

At the same time, many female respondents expressed frustration that men have trouble connecting verbally and emotionally. This response is common, partly because the area of the brain that monitors verbal interaction is larger in women than in men. While this certainly isn’t universally true and personality differences also factor in, we women tend to have a greater capacity to process life verbally than do our male counterparts.

This difference may be highlighted when dealing with stress. Many women want to talk their way through tension. Dr. Gail Gross notes “Women nurture and reach out to others when confronted by stress. They seek support and talk-therapy to lower their anxiety and find a solution.” Men, on the other hand, tend to look for ways to get away from the stress so they can recharge, renew, and rejuvenate.

Our tendency, of course, is to think our way is right and to demand respect from our spouse rather than accept and admire—love and respect—their unique traits and characteristics. The Bible directly challenges us on this point. Romans 12:10 says, “Take delight in honoring each other.” And Ephesians 5:33 applies that “honoring” principle specifically to marriage: “Each man must love his wife as he loves himself, and the wife must respect her husband.”

Once while I was studying this passage to help work through a struggle in my own marriage, God gave me a very helpful pattern for honoring my husband above myself: See him as a gift from God, speak to him with words of affirmation, and serve alongside him to help him succeed.

To be honest, I was looking for a loophole in this principle because I felt I was having to endure unfair hardship for the sake of my husband’s career. I wanted my husband to take responsibility for making my life easier. Looking back, however, I realize my husband was fulfilling this scriptural imperative too. He was loving me “just as Christ loved the church” by taking a risk for our family (see Ephesians 5:25). As each of us embraced our call from God, our life and marriage improved because we ignited the power of admiration.

Our gender determines much in our lives and, as any married person can attest to, these differences can be a cause of significant conflict and misunderstanding. But even in light of our gender differences, the truth is that we are not limited by whether our chromosomes are XX or XY! We each have our own talents, dreams, goals, and the ability to grow in our skills. In marriage, when we intentionally choose to accept and honor our differences—whether those differences stem from biological characteristics, the shaping of our environment, or unique personality traits—our marriages will be strengthened. What may at times seem very bad, we can discover to be, in fact, very, very good (Genesis 1:27–31).

Pam Farrel is the co-author, with her husband Bill, of 44 books including the best-sellers Men Are Like Waffles, Women Are Like Spaghetti and Red Hot Monogamy. Their latest project is a pair of books: 7 Simple Skills for Every Man and 7 Simple Skills for Every Woman. Pam and Bill co-direct Love-Wise, a ministry aimed at connecting God’s love and God’s wisdom to enrich relationships.