Navigating a culture of nonapology
Kelli B. Trujillo 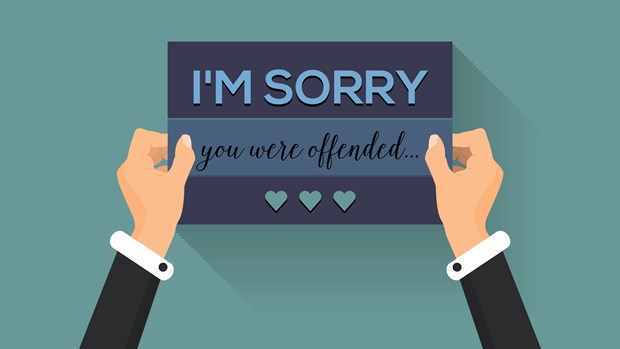 This year OxfordDictionaries.com officially added nonapology to their lexicon. Another witty slang term—fauxpology—nods toward the false, inadequate nature of these expressions. Consider these notable nonapologies:

• After the infamous Super Bowl wardrobe malfunction, Justin Timberlake said, “What occurred was unintentional and completely regrettable, and I apologize if you guys were offended.”

• Cyclist Lance Armstrong, caught in an epic doping scandal, expressed regret for causing “stress” (rather than for his actual cheating).

• When Volkswagen was recently caught wiring cars to skirt emissions rules, their CEO prefaced his “I’m sorry” by saying: “It was a technical problem. . . . An ethical problem? I cannot understand why you say that. . . . We didn’t lie.”

A nonapology may sneakily blame the other party for their response to the wrong: “I’m sorry you were offended.” Or it may be an attempt to justify one’s actions: “I’m sorry I did that, but I was merely trying to . . .”

It’s easy to point a finger at headline-grabbing nonapologies—but it’s much more difficult to face our own. Yet if we’re honest, we’ve each felt that drive to save face and offer half-apologies rather than step into the humility and self-awareness that a true apology demands.

In this issue of Today’s Christian Woman, we’re examining forgiveness. Our cover story explores the challenge of forgiving when it feels impossible, and “Forgiving the Unforgivable?” wades into the challenging question of forgiveness and recovery from sexual abuse. But here I want to reflect on the flipside of the question: seeking forgiveness.

Sincerely seeking forgiveness means going to war with what early Christians identified as “the sovereign of vices”: pride. It’s that insistent desire to self-justify, to blame, to get our way. Even when a heartfelt desire for reconciliation is there, pride still fights for its place—resulting in nonapologies that errantly aim to achieve peace while evading blame.

Learning to sincerely apologize is a challenge I grapple with every single time I face a conflict, for I’ve certainly uttered a few nonapologies of my own. But Scripture tells me that making things right with those I have wronged is essential and even supersedes acts of worship in importance to God (see Matthew 5:23–24).

It takes great humility to truly apologize. Humility is often wrongly understood as a passive and mild-mannered trait. No, in cases like this we must look at the verb form of this word: to humiliate. To apologize we must determine to humiliate ourselves. We must face ourselves as sinners who wrong others, tear away any vestige of self-justifying pride, and with empty hands and open hearts merely say, “I have sinned against you and against the Lord. I am sorry.”