Life isn't always fair . . . but here's what you can hold on to
Elizabeth Cody Newenhuyse 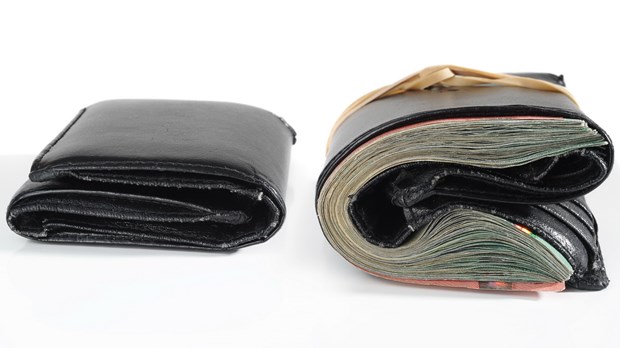 Sometimes when I read the newspaper, I'm outraged. A pastor and his wife lose six children in a fiery car crash, while lawyers and a would-be actor gain wealth and fame from the O.J. Simpson trial. A child is wrested from loving Christian adoptive parents to be returned to birthparents who are virtual strangers. Whiny, spoiled athletes sign million-dollar contracts.

I can't figure out why people who seem to live only for their selfish pleasures become multimillionaires—while some of my most faithful Christian friends live one paycheck away from homelessness. I'm confounded when people who engage in shady business practices never get caught—they only get richer; when people who lie and lust and gossip seem to go on their merry way.

It bothered the psalmist, too. Listen to his complaint: "For I envied the arrogant when I saw the prosperity of the wicked. They have no struggles; their bodies are healthy and strong. They are free from the burdens common to man; they are not plagued by human ills … This is what the wicked are like—always carefree, they increase in wealth. Surely in vain have I kept my heart pure; in vain have I washed my hands in innocence" (Psalms 73:3-5;12-13).

Sure seems that way, doesn't it? It's easy to wonder, Where's the payoff? Does God even notice if I'm trying to be good?

Some aspects of our faith seem so contrary to human nature. Last Sunday in our Bible-study class we discussed Jesus' parable of the vineyard workers who received the equivalent of a day's pay even though some worked since nine in the morning and others weren't even hired until five in the afternoon! Those who signed on the earliest "began to grumble against the landowner." After all, they argued, they'd toiled in the heat of the day. Why should these Johnny-come-latelies get the same deal?

Our study generated a lively debate about fairness in human terms and in God's terms: "The last will be first, and the first will be last" (Matt. 20:16). Most of us accept that statement intellectually—yet I have a feeling we still don't quite get it.

We know it's wrong to begrudge others their good fortune, so what should our response be? How can we rise above the trap of envy, resentment, or scorekeeping? Here are a few ideas that have helped me and other women I've talked to.

When I asked one of my friends for her perspective on this question, she responded laughingly, "Boy, I have enough trouble worrying about myself! I'm so far off the mark, I can't even think about whether others deserve what they get."

When I read my Bible, here's the message I get: Because I've been saved by grace—meaning unmerited favor—my primary task is to become more Christlike through the work of his Spirit in me. As one of God's adopted children, he holds me to a higher standard, and it's a daily, humbling challenge to live up to that standard. In fact, it's often when I'm feeling proud of myself, thinking, Hey, God, look at me! What a good servant I am!, that God shoots off some reminder of my foolishness and dependence on him. When we're tempted to think of ourselves as worthy, Romans 3:23 provides a pithy corrective: All have sinned. None is "worthy" except God alone.

So whenever I whine about the good fortune undeserving people seem to be blessed with while I muddle along, I'm being less like Christ. I've been helped by Oswald Chambers' no-nonsense observation: "Never waste your time looking for justice; if you do, you will soon put yourself in bandages and give way to self-pity. Our business is to see that no one suffers from our injustice."

Think Before You Judge

Appearances can deceive, causing us to hastily type people as "good" or "bad." But we don't always know what's going on inside a person—or behind the hedges of that estate we may admire so much.

When my friend Sue went through a difficult time in her marriage, she'd walk through the historic district of her town, feeling envious of the Victorian mansions she passed. "On the outside, the people who lived in these beautiful homes seemed to lead a charmed life," she told me. "Then I heard how one family was near bankruptcy because the husband had lost his job, and another family had lost a child. It taught me not to judge by externals."

We may think the wealthy have it made, that the wicked are "free from the ills common to man," but we don't really know the state of a life or a soul. That's God's business, and we can …

Author Philip Yancey once quoted a man who had endured Joblike suffering as saying, "You can't confuse God with life." Our life here on earth is imperfect. Tragedy happens. The bad guys sometimes win. The world is not just, but God is. God will deal with the wicked: " … for it is written: 'It is mine to avenge; I will repay,' says the Lord" (Rom. 12:19). While we may not be able to trust in the world's scales, we can absolutely trust God's.

When we speak of "good things" happening to bad people, we often mean material reward, achievement, worldly success. But God has given each of us so much! We can acknowledge that intellectually, but there are times when we all feel decidedly empty-handed. My friend Vicki says she's been working on this in her own life: "I'm least happy with myself when I pay too much attention to what others have. It's almost as if dwelling on others' good things diminishes what God's given me."

So maybe we don't live in a rambling farmhouse on two acres, like the place I've admired just a few blocks away. I've been blessed with wonderful friends, and I love opening my modest home to those friends. Besides, the things of the world rust and decay. We have a much greater Treasure.

I have one friend I always think of when I hear the phrase "when bad things happen to good people." She isn't always cheerful and upbeat; she hurts a lot. But something she said once stayed with me. "How," she mused, "do people go through struggles without God?"

How do people go through life without the Savior? Have you ever imagined not being able to sing praises like those of the psalmist, who after bemoaning the "success" of the wicked, turned away from the unworthy to the One most worthy: "You guide me with your counsel, and afterward you will take me into glory. Whom have I in heaven but you? And earth has nothing I desire besides you (emphasis added). My flesh and my heart may fail, but God is the strength of my heart and my portion forever" (Psalm 73:24-26).

The final, most important step we can take is to express our gratitude for God himself, to share those feelings of love, humility, and awestruck wonder that resound through the Psalms like echoes in a cathedral. So now, instead of being depressed about the injustices I read about in the newspaper or encounter in everyday life, I try to thank God for what I have—the reassurance that he is with me always.

And that's enough. More than enough.

Elizabeth Cody Newenhuyse is editorial director at Moody Publishers, a commentator on Moody Radio, and author of several books. She lives with her family in a village west of Chicago.