And other questions parenthood doesn't prepare you for
Susan Alexander Yates 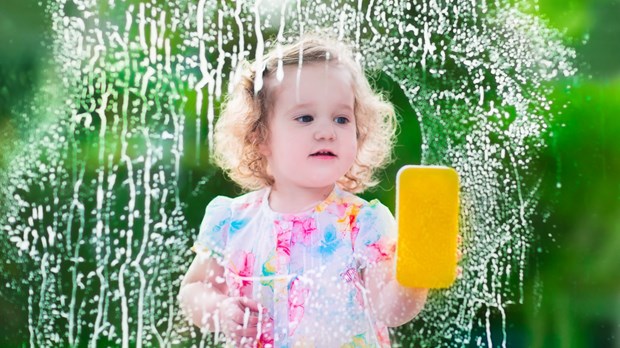 Take heart. There's a great tool available in training our kids—chores. Here's how you can make the most of them.

Begin When They're Young

I've never made school lunches. With five kids in seven years, there were just too many to make! So when my kids started school, I taught them how to make their own lunches, overseeing the final product.

I also don't make beds. When the kids were about four or five, they began to make their own beds. Now, the beds didn't look like the Ritz—but they were done!

I'd phone Grandma and say, "Guess what Susy did today! She made her own bed and made her lunch for kindergarten! Isn't she smart? I'm so proud of her." Then Susy would get on the phone and Grandma would praise her again.

The benefit: Chores help to build a positive self-image in your child.

Use a Weekly Cleaning Chart

Our refrigerator is covered with favorite photos and Post-it reminders. But somewhere in the maze is the family chore chart. Saturday has always been cleaning day. When the kids were all home we divided the house into seven sections, one for each of us. When the kids were young, I wrote out the chore chart and posted it. As they got older, they did it on the computer and posted it. The rule was: You can't do anything after 6 p.m. Saturday unless your chores are finished. Only rare exceptions were permitted.

It's important to be firm in the beginning so your kids will learn chores are expected, not merely suggested. Don't expect to be greeted with enthusiasm. Follow through and whining will decrease.

Often we have to do things in life we don't feel like doing. We do them because they're right.

My friend Marilyn grew up in a musical family. Each night when she and her sister did the dishes they sang. Her mom began this tradition to make it more enjoyable—and it developed their love for music. In fact, Marilyn graduated with a degree in choral music and today teaches voice and piano. And it all began in the kitchen!

Sometimes when our family didn't feel like doing chores, we raced against the clock to see how fast we could do them. Or we planned a reward trip to get ice cream when we were finished.

The benefit: Chores teach us how to approach unpleasant tasks with a sense of humor, creativity, and fun.

friend of mine has a blended family. It hasn't been easy, but she's found a strategy to forge new sibling friendships. She pairs two step-siblings together to run an errand for her. This gives them time alone to get to know each other without competing for a parent's attention. Even a "disgusting" chore—such as cleaning bathrooms—has its purpose: It gives the two kids a chance to complain about Mom instead of each other!

Our boys used to collect the trash around the house and take it out to the street. They were supposed to return the trash cans to the proper place. After repeatedly forgetting to return the cans (after being reminded), my husband decided to teach them a lesson. He put the nasty cans on their beds where the goo dripped on their sheets (and yes, they had to wash the sheets later). While it was done with good humor, it made the point: I expect you to follow through with responsibility!

The benefit: Chores help us train our kids to be reliable.

Deborah has four sons who are busy with numerous school activities, sports, etc. Asking them to help gets such an unpleasant response, it doesn't seem worth it. So Deborah's house is a continual mess, she's exhausted from working and trying to keep house, and her husband's frustrated.

It's time for Deborah and her husband to call a halt to this situation and train their kids to be thoughtful. After all, this is a character trait your children will carry with them into a future marriage!

As summer approaches, assign "secret pals" for a week. During this week, one sibling does thoughtful things for his or her secret pal without being discovered. Maybe it's making a brother or sister's bed or setting the table for dinner. Then reveal the secret pals with a family celebration. It's in the little things in life we learn thoughtfulness.

The benefit: Chores can train your children to be thoughtful of their future roommates and spouses—and to place value in hard work.

When you take advantage of chores while your kids are young, they'll be more likely to take the initiative themselves when they reach the later teen years. As I write this column, we're packing to leave on vacation tomorrow. Guess what we did yesterday? We divided the house into sections for each person and cleaned! And my twenty-one-year-old son just came in and asked, "Mom what else can we do to help you get ready?" Somehow, that made all those early battles worth it!

SUSAN ALEXANDER YATES is author of And Then I Had Kids: Encouragement for Mothers of Young Children and What Really Matters at Home: Eight Crucial Elements for Building Character in the Family (both Word). The Yates have five children ranging in age from 18 to 25.

1998 by the author or Christianity Today/Today's Christian Woman magazine. For reprint information call 630-260-6200 or e-mail tcwedit@todayschristianwoman.net.