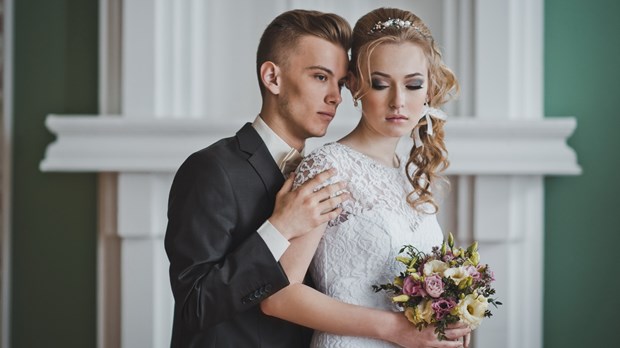 The kitchen linoleum was covered with rose petals and chicken noodle soup. Among that mess sat our marriage certificate, angrily shredded into little pieces.

I can't remember what triggered the argument that led me to throw my soup across the room, rip the rose petals, and tear into our year-old marriage certificate. That's because my husband, Brian, and I fought all the time. What I do remember is marking the calendar on days when we didn't fight . . . maybe once a week or month. In fact, the red roses that lay torn on the floor had been a truce from Brian the day before. But truces don't last long in a teenager's war.

It began innocently enough: Brian and I were two good Christian kids who met in our high school's jazz band. We started dating when I was 16 and he was 17. We continued dating after Brian went to a local college on an athletic scholarship. Brian had been the president of his church's youth group; I was an honor-roll student. At the time, my father was a church deacon and my mother a Bible study fellowship leader. Having attended church nearly all my life, I'd accepted Christ dozens of times for good measure, and I could recite the books of the Bible by heart. But I made the dangerous assumption that God was happy just to have me on his team. While I was sure there was a God, I found it a little hard to believe he cared about what I did on my dates.

Brian and I didn't drink, smoke, or swear. But when I was 17 and Brian was 18, after a year of dating, we began having sex. Brian and I should have known better. We'd been taught what God says about premarital sex—but we'd also been taught what society—our friends, music, television, and movies—said. We listened to our hormones more than to our consciences.

When I celebrated my 18th birthday, I was a free-spirited college freshman with my entire life ahead of me. But 10 months after becoming sexually active, my parents went out of town for a few days, leaving me home alone. That's when I became pregnant. And 30 days later, I was married.

I'll always remember the night before Brian and I got married; I threw my engagement ring down in a fit and told Brian I didn't want to get married. That wasn't the first time I'd said that.

Yet there we stood on our wedding day the next evening, Mr. and Mrs. Teenage Christian, exchanging our vows, smiling for the cameras, eating cake, and later crying tears of self-pity.

The only bright spot in our marriage was the birth of our daughter, Bryanne, eight months later. But once the "babymoon" was over, reality returned.

Our one-bedroom apartment, which Brian paid for by mowing the complex grounds, grew increasingly cramped. My full-time secretarial job reminded me daily of the life I'd left by dropping out of college. Having to use food stamps humiliated us. Brian continued in school full-time and played baseball, but his grades went downhill. We both felt trapped. Blame, anger, bitterness, and resentment stewed in our hearts. Brian felt he'd been robbed of a promising baseball career; I, from my family. Now, as quickly as the marriage had come, I was ready to dissolve it.

My parents had tried to help our 15-month-old marriage with books, tapes, free baby-sitting, financial gifts—you name it. But after witnessing the extent of our anger on repeated occasions, they began to lose hope that our relationship would survive. I decided to take Bryanne, move in with my parents, and file for divorce. While my parents didn't agree with my decision, they recognized I needed to be responsible for my own choices.

I contacted an attorney, who told me the divorce wouldn't take long if Brian didn't contest it. I met Brian in the park to tell him I'd filed. I was prepared for a shouting match, but he said little, other than to ask how Bryanne and I were. He'd seen it coming, because divorce had been a common topic in our fights. But when he didn't fight me on it, my heart softened a bit.

Our court date was June 25, 1990. As the days counted down, I found myself wondering if two people who couldn't manage to live together without screaming could learn how to forgive.

Brian and I'd abandoned attending church when the whispers about our shotgun wedding became more prevalent than the worship. But unknown to me at the time, people—specifically my mom and dad—were praying for God to help us create a marriage.

Suddenly, reality set in: I'd be a single mom at 19, and Bryanne, our 9-month-old, would be raised in a single-parent family.

June 25th arrived. Our divorce papers were signed, and all we needed to do was show up to make it legal. Suddenly, reality set in: I'd be a single mom at 19, and Bryanne, our 9-month-old, would be raised in a single-parent family. What had seemed inevitable now seemed frightening. Although neither of us talked much about it, we knew we'd disobeyed God by being sexually active; we shared the growing desire not to disobey him again by getting a divorce.

So instead of going to court, Brian and I went to a Christian counselor. Skeptical, I watched her sort through our collection of guilt and blame. Brian began to soften each week in our sessions, but it would take more than a counselor to change me. Resentment and selfishness still clouded my heart.

One day, when Bryanne and I visited Brian, he suggested we take a trip to Chicago. We'd never really had a honeymoon, and the thought of a trip together was appealing. But it would have to wait.

We needed more counseling first. Most of our fights had resulted from the anger we felt toward each other for being taken out of family relationships that were comfortable and secure. We'd literally gone from homes with plenty to a house of poverty. I couldn't cook and Brian made minimum wage. We never realized we weren't supposed to perfectly match our families of origin, but create our own family. God used the counselor to help us see that. Hope was budding. Reluctantly, I moved back in with Brian.

We felt too self-conscious to return to church, but God challenged us to grow through the ministry of a television pastor. Every Sunday morning that we tuned in, it seemed as though the pastor talked about Jesus dying to forgive our sins and how we should forgive others. Our fights became less fierce and further apart.

Even so, growth is a process. Our new foundation was our decision to stay together. We read books on marriage and family relationships, went on dates, and eventually attended church. There God continued to teach us about ourselves and him.

As we became committed to our marriage, God blessed us with another child. Tayte, our second daughter, was born on June 25, 1992, the second anniversary of "what might not have been."

Following her birth, I repented of premarital sex—four years after the fact. Ridiculous, but true. I'd known all along my actions had grieved God, but it wasn't until I heard a fiery sermon about the Old Testament prophet Hosea and his unconditional love toward his prostitute wife, Gomer, that I repented.

After Brian finished his degree, I returned to college full-time on financial aid. In my junior year, my speech professor recommended me for a speaking position with a local crisis pregnancy center. Through that job I was able to speak in public and private schools on abstinence. Freed from condemnation, I was able to encourage others to avoid premarital sex.

Brian and I continued to learn about the importance of communicating with God and each other and not focusing on our selfish wants. I became involved with Bible Study Fellowship, and as I studied God's Word, God filled me with compassion and patience toward Brian. Thankfully, Brian began studying God's Word, too, helping him to accept the fact that I'd never be the homemaker and cook his mother was.

Realizing our relationship had never known a time apart from the sexual, he wanted us to have a three-month abstinence period.

Several years later, now in seminary, Brian approached me one night with a gift. Realizing our relationship had never known a time apart from the sexual, he wanted us to have a three-month abstinence period. I was honored. While stretching at times, we found the three months the best our marriage had known to that point. It was something few teenagers who get pregnant and marry ever have—an engagement of pure waiting, unselfish restraint, and respect. This abstinence period laid the groundwork for an even deeper friendship, a mutual respect.

Today, as I look at our family and think how things might have been, I'm grateful for God's grace. Ever mindful of the consequences of sin, I rest now in the truth of how God can bring good out of bad, love out of hate, and a home out of hurt. He's our Redeemer in whom we find hope.

Heather Jamison and her family are missionaries in Kenya.

Copyright © 2001 by the author and Christianity Today