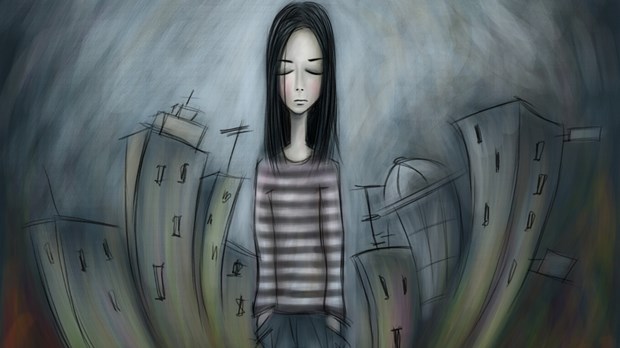 Labor Day weekend in our small town had always been uneventful and relaxing, so it came as a shock when I suddenly experienced heart palpitations and lightheadedness. A panicked call to my physician determined that exposure to paint fumes from painting inside our home was probably the cause. After getting some fresh air, I did feel better.

But the symptoms returned two days later while I was waiting in the checkout line at the grocery store. Somehow, I managed to load my groceries in the car, then I drove home quickly, gripping the steering wheel with sweating hands, praying I wouldn’t pass out.

The symptoms continued over the next few days with even more severity, causing constriction in my chest and throat and trouble breathing. Finally, I called my husband, Brad, at work and asked him to take me to the emergency room. While I waited for him, I found myself crying uncontrollably. It was unlike me to be so out of control emotionally—and that frightened me just as much as my physical symptoms. I’d hit a wall that had come from nowhere.

So that’s all it is, I thought, relieved it wasn’t a heart attack, thinking once these symptoms settled down that would be the end of it.

The emergency room physician ruled out life-threatening causes of my symptoms, such as asthma and heart problems, and then ordered an electrocardiogram (EKG). He finally reentered the curtained-off room and said, “You’re having a classic panic attack.” He nonchalantly wrote out a prescription for a tranquilizer. So that’s all it is, I thought, relieved it wasn’t a heart attack, thinking once these symptoms settled down that would be the end of it.

Instead, that was only the beginning of a bewildering, frustrating journey as the attacks continued. One would come while I was at a movie theater or out to dinner, leaving me desperately wanting to return home. I’d awaken in the middle of the night with my heart pounding, and end up in the living room, crying out of fear and discour-agement that this wasn’t going away. Often, disturbing symptoms such as a choking sensation or chest discomfort would occur as I did normal chores around the house. So began the most difficult year of my life.

I had joined 40 million adults in the U.S. who suffer from an anxiety disorder.

Anxiety has many faces. According to the National Institute of Mental Health, panic disorder is one of several anxiety disorders, including obsessive-compulsive disorder, post-traumatic stress disorder, and phobias such as social phobia and agoraphobia. Panic disorder typically affects women and young adults with workaholic, “type A” personalities, but it can also be found in children, or can begin later in life, as in my case.

Stress is a key indicator, but grief, depression, and physical trauma also can contribute to the onset of panic disorder. Physical problems such as hypoglycemia, diabetes, mitral valve prolapse of the heart, hormone changes, and thyroid conditions can mimic the symptoms of a panic attack.

I clearly didn’t see the stress building up throughout this tumultuous season, and it left me emotionally and physically depleted.

“Any of us can have a panic attack under stressful situations,” said Jerilyn Ross, author of Triumph Over Fear and former president of the Anxiety Disorders Association of America. When a person encounters acute stress or danger, the body naturally responds with a “fight or flight” response, according to Ross. If someone is almost in a car accident, her heart will race, and she’ll probably feel sweaty and shaky. When the crisis is over, her body relaxes and adrenaline levels return to normal. “In a panic attack, the ‘fight or flight’ response misfires,” Ross said. “When a person has four or more attacks in a four-week period, or continues to have them with no apparent trigger and becomes preoccupied with fear of another attack, then a panic attack becomes a disorder.”

I never would have considered myself a candidate for panic disorder. After all, I was 43, a married mom of four, and a homemaker with a relatively peaceful life. It wasn’t as if I had a high-pressure job outside the home or was trying to climb a corporate ladder. In fact, I prided myself on being one who could handle crises well. Yet a closer look revealed factors that accumulated in my domestic life to the point that my body physically reacted to the emotional stress.

Several jarring events had occurred within the past six years. Some were tragic, such as the loss of two grandparents and my husband’s father and sister. The death of my grandmother, which happened just a few months before the panic disorder began, was the most devastating to me and perhaps contributed to the onset. My mother and I were also involved in a minor car accident. Three of my four siblings went through divorces. I had a benign tumor surgically removed from a tendon in my hand. We’d discovered my youngest daughter, Caitlin, had a mild learning disability. And our son, Nate, developed asthma and allergies as an infant, causing frequent illness.

Others were happy, yet stressful, events, such as the unexpected pregnancy and birth of Nate, who entered kindergarten that fall at the same time our eldest daughter, Jo, started her senior year of high school, and our other daughter, Kelli, began competitive sports. We also did extensive remodeling in our home. I tend to be a perfectionist and believe that I can rise above anything life throws at me, but I clearly didn’t see the stress building up throughout this tumultuous season, and it left me emotionally and physically depleted.

Dr. Archibald Hart, Christian psychologist and expert on stress and anxiety, says in his book, The Anxiety Cure, that “many hard-working, driven people (like you and me) don’t realize just how close [we] walk to the precipice of anxiety until one day, out of the blue, a panic attack strikes . . . . We don’t realize how close we are to the edge of anxiety until we lose our footing and tumble . . . into the dark abyss of panic.”

In the beginning, my greatest challenge was accepting that what was happening to me was a physical problem, not a mental or spiritual flaw. It was simply my body’s natural response to too much stress. I came to realize that God was using it to let me know changes were in order, not as punishment because I failed spiritually. Still, it took several weeks of praying and searching to come to that realization. In the beginning I was afraid, discouraged, and bewildered, and I felt I was somehow to blame.

In the beginning, my greatest challenge was accepting that what was happening to me was a physical problem, not a mental or spiritual flaw.

The other obstacle I had to overcome was the need for counseling to deal with the emotional side of panic disorder and stress. Like many Christians, I believed therapy was only for those with serious psychological problems, and I still believed that eventually I would just “snap out of it.” But when that didn’t happen, I knew I needed to talk to someone who could help me understand what was happening and put it into perspective. Without counseling, I think the difficult months could have turned into years, as is the case with many people.

I sought counseling from a Christian psychologist who taught me how to manage stress more effectively and control my symptoms. “You’ve already been through the worst attack,” he assured me. “When another one comes, you know it’ll be uncomfortable, but it won’t harm you. Breathe deeply and allow it to pass.” He was right. I’d experienced the worst while in the emergency room, and subsequent episodes have been less frequent and severe, although I’m still disappointed when they return. The fear that builds upon the symptoms only makes them worse, so being told a panic attack is physically harmless was instrumental in my recovery.

Medication also helped. According to Dr. Hart’s book, there is no magic cure; only lowering your stress level alleviates anxiety. But medication can help relieve the physical symptoms, thus decreasing the fear associated with them. For some, the need for medications is temporary, while some need them for several years, and others recover without the use of any. With the help of our family physician, I was able to find a medication that helped relieve the symptoms with no uncomfortable side effects. While I still take medication when I need to, my physician has assured me that one day I’ll be able to manage on my own.

He was right. I’d experienced the worst while in the emergency room . . .

Besides counseling and medication, recovery has included giving up my beloved mocha lattes and other forms of caffeine that can stimulate anxiety symptoms. I’ve turned to a more natural diet with less refined sugar and processed foods. Exercise to relieve stress is now part of my daily routine, as well as time spent on deep breathing and relaxation practices, combined with prayer and meditation on the Bible. Together, these tools create a powerful defense in dealing with stress.

Most importantly, I learned all I could about panic disorder so I could take responsibility in the healing process. In order to change, I had to understand the factors that caused this disorder in the first place and how to prevent it from happening again.

Though it’s been a painful journey, I’ve become more compassionate as a result. For the first time in my life, I know what a debilitating condition feels like. People can’t “just get over it,” as I once thought. On the days when I experience panic symptoms, it continues to be a difficult journey. Yet while I know I may have these symptoms on and off for the rest of my life, the worst is behind me. And no matter where I go, I take my cure—relaxation, knowledge, and prayer—with me.

It’s still hard for a perfectionist such as me to give daily concerns over to God and realize my limitations, but doing so replaces fear and anxiety with hope and healing. According to experts such as Hart and Ross, recovery comes in learning to live a normal life without fear of recurring panic attacks. As time has passed, I know I’m almost there.

Cindy Baum, a freelance writer, lives with her husband in Indiana and has four children.