I never imagined I'd hear my son utter those words.
Elizabeth Graham 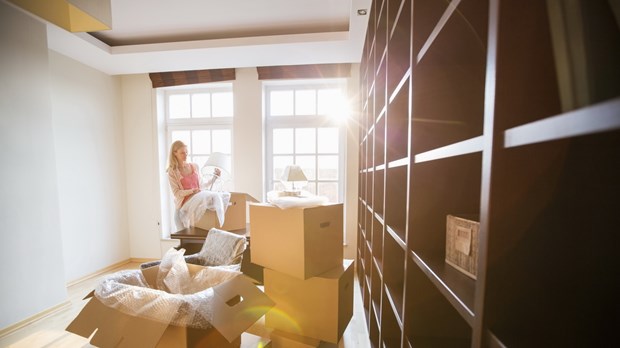 my son, Michael*, announced as we finished eating. Michael's girlfriend, Libby, was working, and my husband, Ed, was out of town, so we'd decided to meet for lunch, a rare treat now that Michael was grown and on his own.

I could see he was nervous, and that made me nervous. "So tell me," I prompted.

"You know I've been looking for a different apartment. Mine's just too far from work, and well," he paused for a moment, then finished the sentence in a rush, "Mom, Libby and I are moving in together."

His words slammed into my stomach like a huge fist. I swallowed back a rush of emotion, desperate to stay calm so I could talk to him about his decision.

Michael had been dating Libby for almost a year, and I'd liked her from the minute we were introduced. They were such a good match, balancing each other's strengths and weaknesses and sharing similar backgrounds, values, and beliefs. Most importantly, Libby was a Christian, as was her family.

Until he started dating her, Michael had been drifting in his commitment to God, and his church attendance had become sporadic. Libby, however, had him back in church regularly, and I was thrilled. But now he was telling me they were moving in together. It was the last thing in the world I'd expected him to say.

Taking a deep breath, I asked, "May I tell you why I wish you would reconsider?"

"Aside from the fact God makes it very clear sex outside of marriage is wrong," I told him, "what distresses me most is that you're setting yourself up for almost certain failure. The statistics about failed marriages are grim enough, but they are much worse for couples who've lived together first. If you love Libby as much as you say you do, why would you not want to commit to her by marrying her?"

He responded with all the typical comebacks. "But Mom," he said, "there's no way I can afford to be married right now."

"But what if we get married and find out we're completely incompatible?"

"You will find out you're incompatible—in a hundred different ways. Every married couple does. But a successful marriage isn't based so much on compatibility as on a commitment to work through the incompatibilities. You don't need that level of commitment just to live together, so your relationship is missing a vital element right from the beginning."

We discussed the matter for another hour, but when we finally hugged good-bye, I knew I hadn't changed Michael's mind.

After our lunch, I walked around in a cloud of grief and disappointment made even darker by a profound sense of failure. How had Ed and I so thoroughly failed to instill a sense of morals in Michael? What had we done to cause him to take his commitment to Christ so lightly?

A week after our lunch, Michael and Libby moved in together. Two days later, Ed came home. I hadn't wanted to give him the news over the phone, so he didn't know what was happening. I wanted to blurt it out the minute he walked in the door, yet I found myself unable to get the words out. I knew Ed would be as saddened by their decision as I was. Finally, the next morning, I managed to pass on the news. Ed's face fell and his shoulders slumped in hurt. After a few moments of silence, Ed just shook his head and left for work.

Although I talked to Michael on the telephone during the next few weeks, I couldn't bring myself to go to their apartment. Perhaps subconsciously it was my way of denying reality, but mostly it was because Ed and I just plain didn't know how to respond to Michael and Libby now that they'd taken this step. Should we take a strong stand of disapproval and refuse to set foot in their home? Should we behave as though nothing had changed? Should we go bearing flowers of forgiveness and acceptance?

Libby's parents, committed Christians who didn't approve of what their daughter was doing either, chose the latter route. They wanted to maintain a relationship with Libby and Michael, so they bought them living room furniture and stopped by frequently to see how they were doing. In our telephone conversations, Michael mentioned their visits. I knew he wanted us to come too, but knowing how we felt, he hesitated to invite us. As more time passed, our absence from their home became awkward, and soon even our phone conversations grew stilted. This only intensified my grief.

Six weeks later, while running errands, I ran into a mutual friend of Libby's and ours. He gave me a hug and said, "My wife and I commend you and Ed for the strong stand you're taking with Michael and Libby. I know it's hard, but as Christians we must not condone such behavior." I started to correct his assumption that we were taking a "strong stand" when all we really were doing was vacillating on what stand to take, but he didn't give me a chance.

"Just the other day," he continued, "Libby told me she felt bad you've never come to see them. I told her you were doing the right thing by staying away and not supporting their decision." He continued for several more minutes, but I heard nothing beyond the statement that I was hurting Libby. The last thing I wanted to do was create a barrier between us.

As I returned to my errands, I prayed earnestly for guidance. "Lord, I don't want to cause destructive pain. Please show me how to respond to Michael and Libby in a constructive manner."

As soon as the words were out of my mouth, I thought of Jesus' actions at the Last Supper. Although he knew that Peter and Judas, two of his disciples, would soon betray him, he nevertheless served them by washing their feet. Until that moment, I hadn't given much thought to the significance of this specific action. Now, however, that thought played over and over in my mind.

When I got home late that afternoon, I found a large package on my doorstep. Inside was a steam cleaner for my carpet I'd ordered several weeks earlier. Staring at the box, I realized it held the solution to my dilemma. Several days earlier Michael had called to ask whom I hired to clean our carpet each year. "Ours is filthy," he'd said. "It's got to be cleaned."

Recalling this conversation, it occurred to me that just as Jesus had served the disciples who were soon to betray him, so with my steam cleaner could I serve my son, even as he was breaking my heart. I called Ed at work to run my idea by him. He sighed deeply and said, "I think it's a good idea. We have to do something to break down the wall that's between us now."

That evening, I called Michael and Libby after they got home from work. "I just got a steam cleaner in the mail today, and I'm dying to try it out. How about if I come clean your carpet for you?"

At first they hesitated, but I assured them I wanted to do this. "I'll be there in an hour," I said.

It was awkward when I first arrived. Michael and I both were uncomfortable, and Libby stayed in the bedroom until I started to work.

As I cleaned, I prayed God would help me break through the wall between us and develop the kind of relationship that would allow Ed and me to be a positive influence on them. I prayed for wisdom in expressing my love without condoning their decision.

To my delight, the steam cleaner worked miracles on their stained carpet. When Libby heard our excitement, she came out of the bedroom. "Look!" I said excitedly. "All the stains are coming up!" Her pleasure warmed me.

When I'd finished cleaning and was packing up the equipment to leave, Libby touched my arm. "Please don't go yet, Elizabeth. Stay and visit."

"Yeah, Mom," Michael added. "Sit down and I'll get you something to drink."

I followed them into the kitchen, and for the rest of the evening we chatted comfortably. The steam cleaner had been just the icebreaker we needed.

When I returned home, I related the evening to Ed, who shared my sense of relief that I'd broken through the barrier that had built between the kids and us. Together we prayed God would continue to guide us in our relationship with Michael and Libby.

Today, they've been living together for seven months. Although the rift in our relationship was mended the night I cleaned their carpet, the fact they're living together is still a huge source of sorrow for Ed and me. And although the rational part of me knows Ed and I aren't responsible for our adult child's choices, I still feel a sense of parental failure, wondering what we should have done differently.

However, rather than dwell on what I have no control over, I'm focusing on staying in a position of positive influence in Michael and Libby's life. Now that the awkwardness has dissipated, Michael and I have had some serious, productive talks about relationships and marriage. He and Libby even agreed to attend a series of marriage seminars our church is hosting.

I'm also gradually coming to terms with the fact my strongest means of influence and most constructive form of guidance at this stage of parenting is prayer. We're comforted by the fact that Libby's parents also are committed to praying our kids into a healthy relationship with God and each other. And pray I do—continually—that Michael and Libby will beat the statistics so stacked against them. I pray their hearts will be solidly knit together well into old age. Most of all, I pray they'll once again commit themselves to God and to a relationship that honors him and blesses them. Until that day comes, I'll continue to stand in the gap for them. At least it's on clean carpet.

*Names, including the author's, have been changed.

Elizabeth Graham is a pseudonym for a writer living in the Pacific Northwest.


How to Stay Close Without Condoning