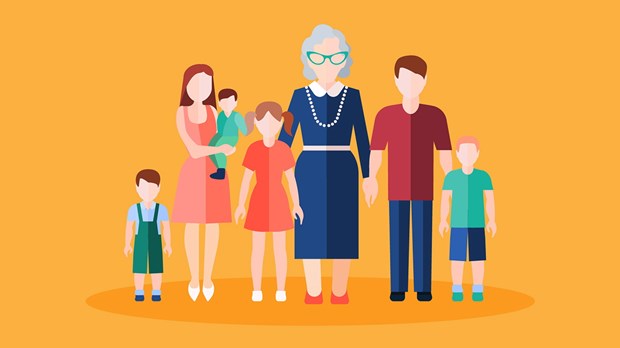 The young woman's voice wavered as she looked around at the small group of women. "I know I'm supposed to love my mother-in-law—but I hate her!" As her tears escalated into uncontrollable sobs, we quickly gathered around her to pray.

Afterwards, I listened in sadness as other women shared the pain experienced by being an in-law. Of the 17 present in the Bible study, only 2 had good family relationships. What truly troubled me was that all the women and most of their in-laws were Christians.

But should I really have been surprised? My own experience as a daughter-in-law had been immensely frustrating. Twenty-six years ago, when I committed myself to my husband for life, I was unprepared for the depth of conflict I'd experience with my mother-in-law.

I still remember when my husband, Greg*, and I arrived home from our honeymoon to find our new apartment completely unpacked and arranged—right down to flour and sugar in the canisters—compliments of Flo, my mother-in-law, who wanted to "help out." I said nothing, not wanting to appear ungrateful, but was bitterly disappointed in not having the opportunity to set up my new home.

In the following weeks, Flo came to our house uninvited while we were at work to do our laundry and straighten the house. "It's just my way of helping," she stated firmly when I objected. "I know how Greg likes things."

I swallowed my protests, again not wanting to cause dissent. I didn't realize I was laying the foundation for an off-balanced kinship as my mother-in-law continued to overstep boundaries and I continued to acquiesce. As the years passed, resentment festered inside me. But I knew I needed to feel love instead of hate.

Understanding these perspectives is the first step to having a smooth in-law connection. However, as I began visiting with women who have successful relationships, I discovered they all shared an attitude that moves beyond this basic understanding. In each relationship, one of the women involved gave a "gift" to the other woman. For most of them, it wasn't given easily, but through a determination of their will. I discovered, too, that it didn't matter whether the giver was the younger or older woman. To my surprise, it didn't even seem to matter if the gift was acknowledged. It just mattered that one of the women was willing to give.

The Gift of Selflessness

Karen spent years trying to get her mother-in-law out of her life and away from her kids. She especially tried to prevent the woman from influencing her husband. "He always came home from time spent with his mom distraught because she'd badgered him about this or that," she told me.

Then one day Karen tried a different tactic. She set aside her feelings and focused instead on her mother-in-law's need for appreciation. "I wrote her a letter thanking her for all the things in my home with which she'd blessed us.

I began to show gratitude for her 'interference' because I realized it was motivated by love, however distorted."

The results were remarkable. Walls came down, and an entirely different relationship emerged—not just between the two women, but with Karen's husband and children as well. Karen's advice is simple: "Look for ways to show gratitude. And teach your children to do the same, no matter what kind of grandma they have!"

The truth is, setting aside our will doesn't come easily. It feels like "giving in," and no one likes to do that—especially when you're convinced the other person's wrong. But that's exactly what Jesus did by dying on the cross for us when we were very much in the wrong.

If just one woman takes the initiative to "set herself aside," whether she's the mother-in-law or daughter-in-law, it will make a tremendous difference to them both.

In Karen's case, it was the daughter-in-law who set herself aside. The results are just as successful if it's the mother-in-law who practices this philosophy. When Sue's son began seriously dating a young woman, she was heartsick. The girl had a vastly different background that was in direct conflict with Sue's family. She spent agonizing hours in prayer over the relationship, hoping it wouldn't progress to marriage. When it did, however, Sue resolutely pushed back her dismay and welcomed the young woman into their family. "I willed myself to accept my daughter-in-law," she said, "because my son had chosen her.

"The key thing to remember," Sue told me, "is that your son's left you and joined with his wife. This is what he's supposed to do, and anything you do to interfere with that process is against God's will. No matter how hard this is," she emphasized, "accepting this fact will pay off in the long run with your children and your grandchildren."

Because Sue set her will aside, she and her daughter-in-law, Lynne, have developed a close, satisfying relationship. But that didn't happen the minute the vows were spoken. In the beginning, Sue had to make the decision daily to respect her son's choice for a wife. She guarded her tongue, she held back her unasked-for advice, and affirmed her daughter-in-law every chance she had.

Sue didn't realize that in those early years of her son's marriage, her actions were under close scrutiny. Lynne was looking for a role model and to her, Sue appeared to be the "perfect wife." Rather than ask for Sue's advice, however, Lynne watched her, learning from her actions.

Realizing this now, Sue advises mothers-in-law to make themselves "watchable." Actions really do speak louder than words, and they're much more palatable to daughters-in-law.

The Gift of Unconditional Love

Unconditional love comes naturally between a parent and child. But such a foundation isn't there between in-laws. What mildly irritates a daughter might deeply wound a daughter-in-law. What only frustrates a mother can infuriate a mother-in-law.

Because unconditional love doesn't naturally exist between in-laws, it's a decision that must be made and then acted on daily. "Love your enemies," we're instructed (). This command crushes all our legitimate reasons for negative feelings toward an in-law. Regardless of those "feelings," we're to act in love.

Becky's relationship with her mother-in-law always had been strained, but when grandchildren came along, it got much worse. "I knew I wasn't being rational," Becky said, "because my mom could give me the same advice about my baby as Jack's mom gave, but from her I took it as criticism."

Whatever the reason behind this hypersensitivity so often present between a mother and daughter-in-law, if just one woman will recognize the irrationality of it and refuse to give in to it, a tremendous pressure will be relieved.

In other words, no matter how wise you are or how valuable your advice might be, until it's ready to be received, it's worthless! Keep it to yourself until it's asked for.

The Gift of Spiritual Growth

As I look back at my 26 years as a daughter-in-law, I see an amazing thing. My relationship with Flo improved as my relationship with God grew. The more I determined to obey God in every aspect of my life, the easier it was to deal with Flo. As I gave God more control, Flo had less control—not because she quit trying or changed, but because my attitude changed.

Two years ago, when Flo underwent major surgery, I cared for her during her month-long recovery. In the beginning I drove to her house each morning with gritted teeth, despising the constant contact with her grating personality.

Once inside her house, however, I put on a facade of love, treating her as I would have my own mom. At times my facade galled me, but I knew it was the right thing to do even if I didn't feel love for her. At the end of each day, I marked a square off the calendar, anticipating the end of my responsibility.

I didn't foresee my father-in-law's declining health. What began as a month of caring for Flo has stretched into many months with no end in sight as my father-in-law now requires daily care.

Somewhere along the way, though, without me even being aware of it, my clenched jaw began to relax as I made the daily trips to their house. It's impossible to respond continually with the appearance of love without your heart softening in the process.

One morning, as I pelted God with complaint-laced prayers about Flo, he inserted an unsettling thought in my mind: Flo had had no say whatsoever in whom she'd have for a daughter-in-law. I, on the other hand, had chosen her, as surely as I'd chosen my husband. I saw her with all her shortcomings and still chose her to be my mother-in-law and the grandmother of my children. Viewing it from that perspective made me realize I couldn't complain about Flo without complaining about myself! "Okay, Lord," I sighed as I headed out for another day of care-giving. "I get the point."

One of these days it will be my turn to be the mother-in-law to some young woman. Perhaps our personalities will click the minute we meet, and we'll become kindred spirits. That would be wonderful, but unlikely. Those relationships are rare. In the meantime, experience has taught me that the most valuable gift I'll ever give my sons is to be a mother who's willing to set aside her needs in order to nurture a loving relationship with their chosen wives. Because of that, I will be the woman who gives the gift.

*The names in the article have been changed.

Elizabeth Graham is a pseudonym for a freelance writer who lives in the Pacific Northwest.

Copyright 2003 by the author or Christianity Today/Today's Christian Woman magazine.