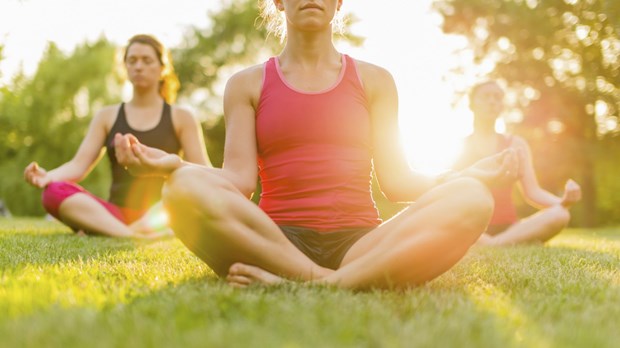 The attractive couple on the television screen gracefully moved their bodies into the next yoga pose: arms extended, head tilted slightly back, a deep breath in. In front of the TV set, a seven-year-old girl and her mother did their best to mimic the posture. The little girl, Laurette, loved this special time with her mom.

It was 1965, and Laurette's mom, Jacquie, didn't think twice about exercising along with this yoga program that came on the TV after Jack La Lanne. She developed a passion for yoga, and began instructing free classes in her home. Laurette served as the demonstration model for her mom. The young girl relished the attention—and her family never suspected this seemingly innocent exercise would open the door to a New Age lifestyle that would affect Laurette for the next 22 years.

Click here to read "Why I Teach Yoga, Pilates, and Tai Chi."

Now 46, Christian speaker/author Laurette Willis tells everyone she meets about the dangers of yoga. The Oklahoma resident addresses groups across the country, speaking from personal experience and her knowledge as a certified personal trainer and aerobics instructor. She's developed a prominent presence on the Internet, largely due to her new exercise program, PraiseMoves, which she calls "a Christian alternative to yoga." She shares her testimony on the website (www.PraiseMoves.com) in a pull-no-punches style, and responds to numerous e-mails—some curious, others critical of her stance on yoga. Additionally, she posts comments on the message boards of other fitness and religion websites. She's also self-published a book and video about PraiseMoves.

So what caused Laurette to become vocal about yoga? And is yoga really all that bad? Her testimony is a bold answer to both questions.

Throughout her childhood, Laurette's family regularly attended church. "If someone had asked us, we would have said we were Christians," she says. "But we never heard the message of salvation at our church." Lacking knowledge about the Christian faith, Laurette's mom found herself drawn to New Age practices, and began reading books by Nostradamus and Edgar Cayce (both claimed to have psychic abilities) and taking Laurette to an ashram, a Hindu yoga retreat.

As an adult, Laurette immersed herself in every New Age and metaphysical practice she came across: chanting, crystals, tarot cards, psychics, channeling spirits.

"I tried everything—Kabbalah, Universalism, Taoism, Zoroastrianism —because I was spiritually hungry," Laurette says. "I call the New Age movement 'Burger King' because it's like the fast-food restaurant's motto: 'Have it your way.' That's what the New Age movement tries to do, to achieve God on its terms."

There was one thing Laurette wasn't remotely interested in pursuing: Christianity. "I thought Christians just wanted to give me a bunch of rules and dogma," she says. "I didn't know they were speaking about a relationship with Jesus."

But in Laurette's quest to find herself, she only found a deepening sense of loneliness. "God will use whatever it takes to bring you to your knees," she says. "I'd made a mess of my life. I was an alcoholic. I'd been promiscuous. I tried every form of religion, never coming to any knowledge of the truth."

One day in 1987, a thought popped into Laurette's head: What if everything I thought about God was completely wrong? Two days later, she fell to her knees. "I didn't know anything about the Bible or Jesus. I just cried out to God from the depths of my soul, 'I give up! You win! If you can do something with my life, you can have it.' "As Laurette asked God to take control of her life, she felt a physical weight lift from her body.

"I learned much later that the weight was sin," she says. "I hadn't realized sin was real. New Agers think the word 'sin' is an acronym for 'self-inflicted nonsense.' That's the deception of the Enemy, because if there's no sin, then you don't need a Savior."

She remembers the change at the moment she accepted Christ: "I felt peace descend upon me for the first time in my life."

After giving her life to God, Laurette began devouring the Bible. She burned her New Age books and disengaged from everything associated with her turbulent past—including yoga.

For years, Laurette never gave yoga a second thought. But in 2001, an idea popped into her head: What if there was an alternative to yoga that provided exercise while spiritually moving Christians to praise the Lord? She spent a good deal of time in prayer, wanting to be certain this idea was God's will.

After two years of planning, Laurette self-published a PraiseMoves book and video in 2003. She began certifying PraiseMoves instructors across the country last fall.

The PraiseMoves program utilizes gentle stretches that correlate with Scripture verses. There's "The Eagle" stretch, where the arms are pulled back to resemble a bird in flight. While students hold this stretch, Laurette reads Isaiah 40:31: "But those who wait on the Lord shall renew their strength; they shall mount up with wings like eagles" (NKJV). Other stretches include "The Angel" (Psalm 91:11), "The Rainbow" (Genesis 9:16), and "The Altar" (Romans 12:1). At each session's end, students are asked to prayerfully consider a verse from the Bible, or to spend some quiet time expressing gratitude to God.

The Problem with Yoga

Laurette wanted PraiseMoves to provide all the physical benefits for which yoga is often touted: improved flexibility, weight loss, reduced stress, and improved circulation, to name a few. But she wanted the similarities to end there.

The goal of all yoga, Laurette explains, is to obtain oneness with the universe. That's also known as the process of enlightenment, or union with Brahman (Hinduism's highest god). The word "yoga" means "union" or "to yoke."

"Yoga wants to get students to the point of complete numbness in their minds. God, on the other hand, wants you to be transformed by the renewing of your mind through his Word," Laurette says.

Before she became a Christian, Laurette used subliminal tapes to train her mind to empty itself. These tapes are often used in yoga classes, she says. She also taught yoga classes and instructed her students in astral projection, or "stepping outside" of the body, which Laurette says poses a serious spiritual danger.

"If there's nothing in your mind, you're open to all kinds of deception. After coming to Christ, I wondered who—or what—came into my body when I 'stepped out.' While I don't believe Christians can become possessed, I do believe we can become oppressed by demonic spirits of fear, depression, lust, false religion, etc. These are all things designed to draw us away from Jesus Christ."

But what about hatha yoga, the less overtly spiritual form of yoga taught at most gyms? Even in this format, Laurette says there are commonly used words and poses antithetical to God's Word. For example, the word "namaste," often said at the close of yoga classes, means, "I bow to the god within you." The sound "om," chanted in many yoga classes, is meant to bring students into a trance so they can join with the universal mind. And the "salute to the sun" posture, used at the beginning of most classes, pays homage to the Hindu sun god. Laurette believes it's impossible to extract Hindu spiritualism from yoga—and she's gotten a bit of confirmation on this from an unlikely source:

"I received an e-mail from a staff member of the Classical Yoga Hindu Academy in New Jersey. The staff member wrote, 'Yes, all of yoga is Hinduism. Everyone should be aware of this fact.' This staff member included that she didn't appreciate my 'running down the great Hindu/Yogic religion,'" Laurette says.

Her statements about yoga have also drawn criticism from some Christians. Some accuse Laurette of being judgmental. Others say her fears about yoga are irrational. She's quick to tell critics PraiseMoves isn't for everybody, but she doesn't back down from her stance on yoga. When she speaks with Christians who practice yoga, she encourages them to pay close attention to any hesitation they feel—and then to check out the facts for themselves.

Numerous Christian women have told Laurette they decided to quit yoga after learning about its Hindu roots. It's a hard decision for those who've invested many years and many dollars into the practice.

Laurette says, "I tell people that if their reasoning is, 'But I've already paid for these yoga classes,' or 'But I just bought these cool yoga pants and a yoga DVD,' to ask themselves: Am I willing to give these things up to know the truth?"

There's a new practice popping up at churches and fitness clubs around the country. Dubbed "Christian yoga" or "yoga for Christians," these programs supposedly offer the physical benefits of yoga along with Christian spirituality. But is it really possible for yoga to be transformed into a practice for Christians?

Doug Groothuis, author of Confronting the New Age and a professor of philosophy at Denver Seminary, says proponents of "Christian yoga" are misled—and are misleading others.

"'Christian yoga' is an oxymoron. Yoga is rooted in Hinduism and cannot be separated from it," he says. "There's nothing wrong with stretching and calming down one's breathing. But yoga isn't really about that; it's aimed at transforming human consciousness to experience the Hindu god, which is a false god."

TCW found several "Christian yoga" instructors who are affiliated with secular yoga organizations that have a Hindu or New Age bent.

When investigating a Christian yoga class, be on the lookout for:

Metaphysical jargon. Phrases such as "breathing in positive energy and breathing out negative energy," "focusing on the third eye," and "getting in touch with the divinity within you" have New Age implications.

Projection. Beware being told to empty your mind or to step outside your body.

Feelings of discomfort. Pay attention to those feelings. Even if you can't pinpoint why you're uncomfortable, this may be the Holy Spirit's way of letting you know the class isn't for you.
—H.V.R.