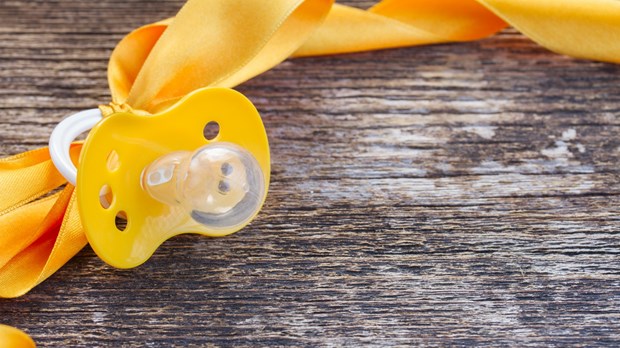 "Don't drink the water," my coworker advised me with a wink. We'd just heard that five of our colleagues are pregnant . . . and that's just on the third floor of our office. As an unmarried woman with no children, I knew what she was getting at. But even so, her comment had a bit of a sting to it.

In the family I grew up in, motherhood was considered a high calling, and my own mom had three children by the time she was my age. I always imagined I'd follow in her footsteps, so it can feel a little unsettling to find myself babyless at this point in my life. Certainly there are good sides to this season, but I admit that moments like these can catch me off balance.

As I'm gearing up for several months of baby conversations and baby paraphernalia, I know I'll face daily reminders of this club I don't belong to. So for now, I need to figure out some way to handle baby season with grace . . . preferably before the spate of showers begins. I have a long way to go, but here's a start:

Acknowledge the way you've been wired.
Many of us have gifts and desires that seem to have no outlet in our culture except within the context of parenthood. Maybe we're good nurturers or caregivers, or we have an inner drive to provide for or be needed by someone. At this point in my life, I'm grateful that these urges come only in occasional flashes, and I haven't experienced the biological clock phenomenon some of my fellow kidless friends have experienced. Still, I've found it's good for me to be intentional about exercising some of the more traditionally maternal aspects of my nature in various ways over the years, whether it's babysitting my godson and his brother or mentoring teens from my church or simply holding my friends' babies when we get together. For one thing, this gives me a glimpse into what it's like to have kids in real life, and it also helps keep those inclinations inside me from lying dormant.

My friend Sarah is undoubtedly wired to care for babies. But she has none of her own right now, so she helps out in the toddler room at her church once a month. Another friend, Scott, has discovered that his Dalmatian mix puppy gives him something to take care of and a reason not to stay at work late.

Certainly, many of us would like to have children someday, and these ideas aren't replacements or temporary substitutions. But there are ways to utilize the gifts and desires we've been given, regardless of our marital status. And as I've found, this is beneficial not only for the people on the receiving end but for our own health, too.

Take things one baby step at a time.
Not long ago, one of my close friends met me in a parking lot halfway between our houses with something she said she wanted to give me in person. As it turned out, the something was a card announcing I was going to be an "aunt" to her baby. I'd only read about half of the card before I caught the gist of it and immediately let out a squeal-scream, oblivious to the people making their way to their cars around us. As I admitted to my friend later, the "squeam" was part excitement for my friend and her husband, but also part shock for what this will mean for me and our relationship.

We've been friends for a decade now, but a baby is uncharted territory for us. Will another life stage between us create too much of a gap? Will she still have time for me when she takes on the title of mommy? I haven't figured all that out yet . . . or I should say, we haven't figured that out. Because we're committed to walking through this together and to keeping the conversation open about expectations and fears and the unknown. As she reminded me that day, perhaps it's not just for biological reasons that there are nine months before Baby arrives. It may well be that God knows we all have some growing to do in the meantime.

Choose the difficult road of rejoicing.
It doesn't come naturally to me to "rejoice with those who rejoice" (Romans 12:15). It's easier for me to host a pity party than a baby shower, easier to succumb to moping than to choose joy. But if God unequivocally calls us to delight in other people's news, I have to believe he'll give us what it takes to pull that off. And maybe, in his grace, when we choose that road, the emotions just may follow.

Yesterday this theory was put to the test at my sister-in-law's baby shower. She's expecting a little girl in December—the first grandchild on both sides. I'm thrilled at the prospect of becoming an aunt, but there's a part of me that feels like the order is all wrong. I guess I never imagined my little brother would be married and preparing for parenthood while I'm still being set up on unsuccessful blind dates.

I expected the shower to evoke some mixed emotions for me, but I wasn't prepared for the gift my grandmother gave the baby-to-be. There was an almost reverent hush as my sister-in-law unwrapped the family heirloom, hand-painted by my great-grandma and given to my grandmother at the birth of her first baby. Even in the midst of that made-for-TV moment, as tissues got passed around the room, I knew I had a choice: I could make this a poor-me occasion, or I could embrace the sweetness of the moment for our whole family. As I reached for my camera, it hit me that maybe the whole "rejoice with those who rejoice" motto isn't just for those who are celebrating. It may be just as much for the rest of us—an antidote of sorts against wallowing.

So the next time someone advises me not to drink the water, perhaps I won't worry so much about who is drinking it. Maybe I'll fill a glass instead . . . and propose a toast.