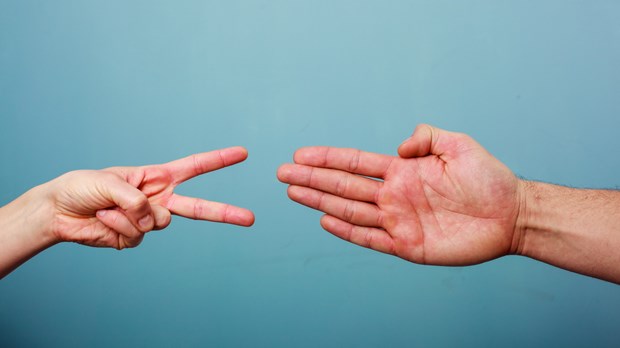 It didn't take long into my marriage to discover how incompatible my wife and I were. One reason I was attracted to Barbara in the first place was her apparent interest in theology. We'd spent many happy hours in college taking Bible and religion classes together; we even co-wrote a mediocre paper on the Reformation! Few people have my nutty interest in theology, so I felt especially blessed to have discovered an eligible woman who shared that interest. I proposed as quickly as I could, and I was ready to live happily ever after.

Some days into the marriage I was shocked to discover the truth about Barb. I'd just finished some weighty tome—such as Dietrich Bonhoeffer's Creation and Fall—and encouraged her to read it. She said she wasn't interested. When over the next week I suggested another theology book, and then another, and was turned down repeatedly, I asked what was going on.

"Once in awhile it's okay. But most of the time I find it too dry."

That was the first of many shocking revelations. As the years unfolded and we each matured in our own way, the differences became more marked. She liked to get up early; I liked to stay up late—so when exactly were we supposed to have sex? She stayed politically liberal as I became more conservative. She enjoyed being laid back; I liked to plan way in advance. She's energized by a room full of people; I'm drained. She thought the kids should be given a break for being kids; I thought they should be disciplined more. And we couldn't even argue on the same page—I liked to get things out in the open; she liked to do anything but that.

Years ago, we compared our Myers-Briggs personality scores. The literature that interpreted the results was fairly pessimistic about our future.

But surely after 30 years of marriage, things have gotten better, no? I recently took an online marital compatibility test to see whether time has made a difference. We scored a 60 percent. The test maker said, "If you're less than 70 percent compatible you may have to struggle hard to maintain a long-term relationship."

It appears that Barbara and I are simply not compatible. Some would say we have irreconcilable differences. But there's a mystery here: though we're as incompatible as ever these days, we find ourselves happier than ever, as well.

As long as we have so much in common, the relationship can blissfully proceed. The problem is that only the rare marriage can be continually compatible.

People grow, mature, and change—or at least we all hope they do. Invariably the person we eye across the table at anniversary 10 will be different from the person we walked down the aisle with. And that different person will just as likely be less compatible.

Though compatibility is good and enjoyable as far as it goes, it never goes far enough to make a successful marriage. That's because it stays mired in the self.

Compatibility is ultimately about finding someone who is compatible with me. Compatibility is about my feeling good about being with someone else who shares my interests, blends with my personality traits, shares my values.

Biblical marriage is something altogether different, but at the core isn't much different from the rest of the Christian life: "Do nothing out of selfish ambition or vain conceit, but in humility consider others better than yourselves. Each of you should look not only to your own interests, but also to the interests of others. Your attitude should be the same as that of Christ Jesus" (Philippians 2:3-5). Jesus, in fact, had little in common with the people on planet Earth. The chasm between him and us is the difference between the infinite and the finite, holiness and sinfulness, God and man.

But he didn't count compatibility with God a thing to be grasped, Paul says. Instead he emptied himself, taking the form of a servant, of those who were markedly incompatible with him.

After a few years of marriage, when couples stare into the abyss of their non-compatibility, they generally panic and try to create a new compatibility. My wife increasingly demanded that I listen with deep sincerity to all the little details of her life. I really tried. Couldn't do it.

For my part, I insisted that my wife go to a driving range with me, and I tried to teach her how to hit a golf ball. We ended that experiment in spouse abuse after lesson one.

The more we tried to find areas of compatibility, the more miserable we became. I remember sitting on the bed beside her after another failed sexual adventure (an activity at which we were no longer compatible, either, it seemed). I began to mull over all our differences: politics, kids, remodeling, attitudes toward in-laws, money issues, spirituality—the list was endless. On and on my mind raced. I was overcome with a profound sense of how utterly different we were, and how it was simply impossible for us to reconcile those differences.

But Barbara and I are compatible on one thing: divorce isn't an option. So we simply decided we were going to make this thing work in spite of the fact that we were so incompatible. We didn't decide it in a day, and we didn't decide it with gusto and optimism. We simply felt we had no choice but to learn how to live with a person so utterly alien to us.

And it was in that period that we began to learn about martyrdom, about the death of the self, about giving up the desire for compatibility. If marriage wasn't about how my spouse could make me happier, we each concluded, then it must be about each of us trying to make the other happier.

One morning on vacation on the beach, she asked if I wanted to go for a walk and look at the tide pools. This isn't my instinctive idea of a good time, but she wanted companionship while she did something that was interesting to her. So I went and entered into the experience as best I could. I didn't get nearly the enjoyment from it that she did, but I was happy she enjoyed it so much.

One evening on the same vacation, after a long and busy day, she suggested we go out to eat. She was exhausted, and the last thing she wanted to do was cook over a hot stove to prepare a meal for our family and the extended family with us. I, however, grimaced about the cost of going out. She responded by saying she'd go to the store and whip something together. While this wasn't something she wanted to do, she knew it would make me happy.

These are simple, ordinary acts of martyrdom, the giving way of self for the sake of the other. Every marriage has plenty of such moments. They can be resisted with complaints—"Why don't you ever do what I want to do?" and "Why don't you consider my feelings?" Or they can be submitted to with grace.

This forsaking of compatibility is slow and painful to learn. At the end of the day, Barb and I each feel a sense of regret at not having done more for the other. But every morning there's a new vow to give it another shot.

And here's the crazy thing: the more we stop trying to get each other to be compatible, the happier our marriage has been. Instead of our differences being insurmountable obstacles to happiness, they're simply facts that make our relationship interesting—aggravating at times, to be sure, but ultimately more fascinating.

And one more not unimportant thing: the more we've learned to love each other despite our differences, the more we've been able to love and serve those outside our marriage, most of whom are different from us in so many ways.

Certainly Barb and I share many things in common. But I doubt we share any more than we do with anyone on the planet. Two human beings are going to share some things in common, no matter how different they are.

But that's not what holds a marriage together. Irreconcilable differences are key—at least how we deal with them and learn to love in spite of them.

Mark Galli, managing editor of Christianity Today, is author of Chaos and Grace: Discovering the Liberating Work of the Holy Spirit (Baker Books).