One couple thought being Christians would save them from marital problems. Their naïve beliefs made everything worse.
By Judy Bodmer 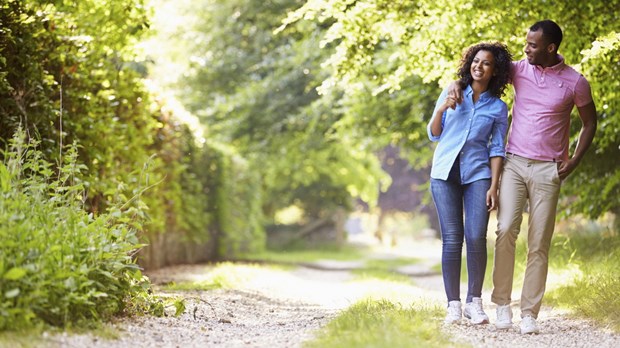 "Larry, we have to talk," I said as my husband prepared to go to work. Our argument from the night before still hung in the air. "There's something wrong with our marriage."

"Judy, I have to go," Larry said, clearly irritated.

"Sure I do. I have employees waiting to be let in."

"Larry, if you love me, why don't I feel it?" I needed him to put his arms around me and reassure me.

But he didn't. He just walked out the door.

What had happened to us? Two years before, when we'd committed our lives to Jesus Christ, Larry and I had been like newlyweds again. I was sure with God as our partner, our journey through life would be smooth.

But it wasn't. Our first child, Matthew, who was born shortly after we became Christians, needed major surgery when he was six weeks old. A few months later, Larry lost his job. I thought about going to work, but then discovered I was pregnant again. I was scared and needed Larry to reassure me, but he couldn't because he was dealing with his own fears.

We started to fight, sometimes over the most ridiculous things, such as the way he read the newspaper or ate his cereal. I felt guilty for my angry outbursts. Christians didn't act that way, I reasoned. So in the name of peace, I swallowed my feelings and prayed God would make Larry more thoughtful, open, loving, and romantic. But with each passing year, our fights grew in frequency and intensity. We became like strangers sharing a house.

I slogged through two years hoping things would change for the better, but they didn't. Surely this wasn't what God wanted, yet I could see no hope of happiness with this man.

In the heat of one of our arguments I said "divorce." Larry hardly winced. Maybe it was the solution to our problems.

At the end of my rope, I confided in my sister Barbara how unhappy I was. She and her husband, Dave, arranged for us to attend a weekend marriage retreat. They took our kids and even paid the deposit. While both Larry and I knew it was a waste of time and money, we figured this would prove to everyone that we'd tried.

During that weekend, one of the speakers talked about his fear of being unable to live up to everyone's expectations. After that session, each couple had some time to communicate with each other their thoughts about what the speaker had said. In a rare moment of courage, Larry dropped his defenses and shared how he identified with the speaker and how hard it was to please me, his employees, his customers, his friends, and his family. He even told me about the pain of unmet expectations he carried from his childhood. As I listened to his openness, I could feel the wall I'd built toward him over the years begin to come down. Through several tearful conversations that weekend, we were able to forgive each other for the pain and hurt we'd caused and start over.

But it wasn't until we realized how naïve we'd been—thinking that because we were Christians our marriage would be perfect—were we able to uncover the myths we'd bought into. While we realized many of these myths were well-meaning, they were destroying our marriage! After that weekend, Larry and I spent several years blasting these seven myths and uncovering the truth. Here's what we discovered.

If I have a daily quiet time and attend church regularly, I'll have a happy marriage.

In church I'd often hear that if I'd spend time with God every morning and study the Bible, my life and marriage would go well. So I started a daily quiet time, began memorizing Scripture, and joined a women's Bible study. I believed these "religious" acts would help my marriage be all I wanted. But when nothing changed and, in fact, things seemed to get worse, not only did I become disillusioned with our marriage, I also began to question my relationship with God.

This is the truth: Every couple goes through tough times—even Christians. Jesus clearly states that "in this world you will have trouble" (John 16:33). Does that mean it doesn't make any difference whether we read our Bibles and attend church? No. While God didn't take away those painful times, and he didn't always answer our prayers in the way we'd assumed, he used our trouble to focus and mature us through our prayers and Bible studies.

Our marriage will be divorce-proof if we're both Christians.


This belief left us feeling ashamed when we stood at the brink of divorce. We didn't think anyone would understand, so we waited to go for help until it was almost too late.

The truth is: Being a Christian doesn't guarantee you won't get divorced. Larry and I believed that because we were Christ-followers we'd live a fairy-tale life. Christian therapist Roy Austin calls this "magical thinking" and believes many Christian couples struggle with it. He says, "'Magical thinking' leaves couples less prepared for the rigors of marriage." This may explain why Christian pollster George Barna has found that the divorce rate among born-again Christians is now the same as for non-Christians. If Larry and I had understood this truth, we might have gone for help sooner. Today we are open and honest about our hard years when speaking to young married groups, which they've found both eye-opening and helpful. We just wish someone had told us this truth.

Scriptures can be a simple guide for our marriage.


One of the hot issues with which Larry and I dealt was who should handle the money. We thought that to be scripturally correct Larry should pay the bills and balance the checkbook. He always felt pressured by the time it took to do this. Since he handled all our money, I never knew how much I had to spend on groceries and clothes. This added to an already tense situation.

Here's the truth: Scripture can be a valuable guide for our daily living—as long as we don't misinterpret what it says. Intensive Bible study taught us that God intends for us to be one unit, submitting to each other and working together for the good of the whole. That means using our giftedness. Right now, I have more time available to handle our daily financial tasks. There have been other times when Larry took this responsibility. We've also learned that together we make better decisions than we do individually.

We need to keep our marital problems to ourselves.


When I joined a women's Bible study, everyone I met looked happy and put together. I knew no one would understand that Larry and I sometimes said ugly, hurtful things to each other, so I kept quiet about what was happening in our marriage.

But the truth is: God created us as social beings to live in community where we can help each other. That weekend retreat opened my eyes. It was a couple daring to be open with us about their problems that began the healing in us. In James it says we are to confess our sins to each other so that we can pray for each other and be healed (5:16). By keeping quiet, I hindered the healing that could have come from sharing with these other women who may have been just as afraid as I was to share what they were going through.


I thought "peace" meant no fighting and so I denied my negative feelings. I'd let things build until I exploded over something trivial.

Here's the truth: It's okay to fight. In the Bible it says, "In your anger do not sin: Do not let the sun go down while you are still angry, and do not give the devil a foothold" (Ephesians 4:26–27). At that weekend retreat, we were challenged to bring up whatever was bothering us within 24 hours or forget it. When I got home, I decided to try it. At breakfast Larry sat reading the paper, ignoring me. It bothered me that the paper seemed more important than I did. In the past I would've buried my anger, but instead I said, "I feel angry that you're reading the paper instead of talking to me." To my amazement, Larry put down the paper, apologized, and we had a nice conversation while we ate our cereal. I was pleased it worked so well. Of course, it didn't always, but just saying the words, "I feel angry," helped defuse much of the feelings I'd been carrying around for so many years. It was like keeping the blackboard wiped clean. And then when we did argue, it was over one subject, not ten.

I need to pray for God to change my husband.


I spent much time in prayer begging God to change my husband. I knew we'd be happy if only Larry were different. But to my dismay, as much as I prayed, I didn't see any significant changes in him.

The truth is: God wants to change me first. My prayer life changed dramatically after I finally got the message of Matthew 7:1-5: I was a hypocrite, trying to take the speck out of my husband's eye, when all the time I had this log in my own eye. That log was so huge I couldn't see what I was doing to my husband. God revealed to me that my judgmental attitude drove Larry away and hurt him deeply, the exact opposite of what I wanted. That day I prayed a new way. I prayed for God to reveal my sins. As he did, I asked him to forgive me and to help me change. Instead of shame, I felt clean and whole. Slowly, God peeled off layers of old, rotten thinking, and beliefs and bitterness that were destroying my marriage. I began to "see" my husband in a new light and told him of the positive things I saw in him. This encouraged Larry and helped him grow into a godlier husband. It also allowed me to accept some of his "faults" that I never thought I could.

My husband should be stronger in his faith than I am.


Early in our Christian walk, a woman told me that when her husband became a Christian he instantly became patient, loving, and romantic. I looked at Larry and wondered why his conversion hadn't made a bigger difference in our marriage. I decided it was because he wasn't spiritual enough, and so I began a mission of helping him grow in his faith. I gave him books, left him notes, and dragged him to all sorts of conferences and seminars.

But the truth is: We each grow toward Christ in our own way and time. I was critical of my husband's lack of spiritual leadership, which caused me to push and Larry to retreat. Finally, God convicted me that I wasn't responsible for Larry's spiritual life. It was hard, but I backed off. That's when Larry felt God calling him to get serious about his relationship with Christ and he grew in leaps and bounds. While it took time, now Larry's the strong leader and loving husband I've always wanted.

Larry and I survived those early years of mythical thinking. Now, after 33 years of marriage, Larry makes my coffee every morning, prays with me, listens to my gripes, gives me encouragement in my struggles, and accepts all my quirky ways. It hasn't been the easy journey I thought it would be, but our love is richer for having struggled. I thank God every day for the reality of my marriage.