Those magic words work wonders—especially in the marathon of marriage.
Gary Smalley 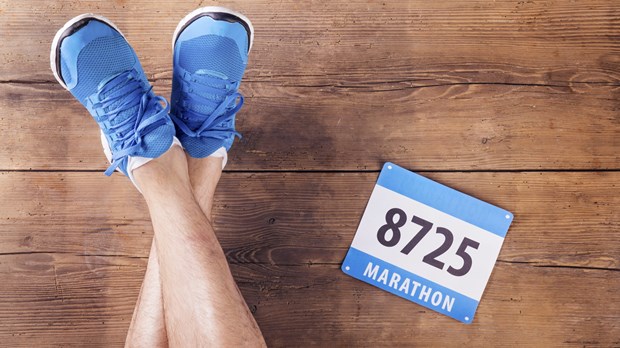 That was my first thought when I felt an intense tingling throughout my body. Not now! I thought. I've still got eight miles to go!

I was running my first marathon, and I was determined to finish. But at the 18-mile marker, my calves started to cramp severely. With each grueling step, my mind and body were at war. My mind said, Keep going! You've dreamed of this and trained for six months, while my body said, Give it up, man! This hurts too much.

I kept going—slowly and painfully—and found my wife, Norma, at the next mile marker. I was limping along, so she thought I was injured. I told her I was thinking about quitting. I didn't want to walk the rest of the way, just to say I'd finished; in my mind, that would kill my dream of running a marathon. As I struggled with each step, Norma said something I'll never forget: "I believe in you!"

That was all I needed to hear. The rest of the race was like a scene out of a Rocky movie. With each agonizing step—and yes, I'd resorted to walking by then—Norma was by my side. Some friends and my family joined us. As we reached the 24th mile, I couldn't endure walking any longer. If I was going to finish the race, I had to start running. After several yards, my calves began functioning again and I was able to jog. Finally, after 26.6 long miles, I crossed the finish line, and just minutes later Norma and my family caught up to congratulate me!

Looking back on the experience, Norma's words—"I believe in you"—seem simple. I've heard her use those words many times before. But at that moment, during a time in which I felt so defeated, her words were like a burst of energy.

One of the greatest gifts we can give our mates is to believe in their dreams. As the pressures of life intensify, sometimes the difference between going after a dream and remaining passive is having someone say, "I believe in you!"

Norma and I try to follow this great advice from Hebrews 3:13: "Encourage one another daily, as long as it is called Today." In our efforts to apply this to our lives, we always ask ourselves two important questions:

1. What are my mate's dreams? I want to know what Norma's dreaming about. What motivates her? What does she want to accomplish? During a recent road trip, Norma and I made a list of all the things we wanted to complete before we die. As Norma talked, I was amazed at the diversity of her dreams. I had no idea she even dreamt about some of those things.

When Norma and I list our dreams, we put them in four categories—spiritual, physical, mental, and emotional. Within these categories, we write down what we both want to accomplish in the next 10 years, 5 years, and 1 year. By putting them on paper, we get to see what's most important to our spouse.

I get to see what Norma's been thinking about that she may not have ever verbalized. And it gives us both clear direction, enabling us to make daily progress together toward our long-term goals. That's a great way to deepen our intimacy.

2. What stands in my mate's way? After hearing about Norma's dreams, I try to determine what might prevent her from realizing those goals. One of Norma's lifelong dreams was to organize our family and our ministry. She'd supported my ministry adventures early on, but she eventually realized that organizing our ministry was a full-time job—and once our kids were in school, she wanted that job. We thought of lots of reasons not to make the change, but it was clear God was moving us to go for it! So now I was able to encourage and believe in her!

As I discovered while running the marathon, when someone believes in you there's no limit to what you can accomplish. But a goal is only a dream until someone makes it a reality. And that reality sometimes begins with a simple word of encouragement.

Copyright © 2003 by the author or Christianity Today/Marriage Partnership magazine.